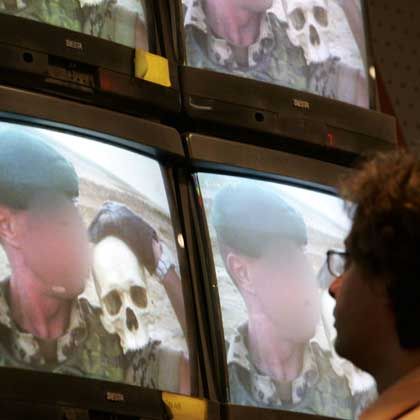 German television station RTL also got ahold of some images this week.

The skull scandal in Germany refuses to go away. Two days after tabloid Bild Zeitung published photos showing German soldiers playing with a skull in Afghanistan, the paper now says it has dozens more photos in its possession -- some of which it plans to publish on Saturday.

The new images, the paper says, show soldiers staging an execution with a soldier pointing his pistol at an assembled skeleton. An additional picture shows a skull wearing a German army beret and another shows bones arranged to spell out "CSR-Team" -- the abbreviation for the unit which patrols the area surrounding the German camp. The German television station RTL has also come into possession of new images, including one of a soldier apparently kissing a skull mounted on his left bicep.

One soldier told Bild that German patrols often stopped by the site where the bones were found. One eyewitness reports the site looks more like a gravel pit than a cemetary. The witness told the paper that posing for photos there had become commonplace. A number of soldiers evidently spelled out their names using the bones.

The new revelations come on the heels of images published by Bild on Tuesday which showed German soldiers posing with a skull placed carefully on an army jeep. One image showed a soldier posing with the skull next to his exposed penis.

Defense Minister Franz Josef Jung on Friday announced the suspension of two soldiers involved in the skull scandal. Investigations are continuing into three further suspects in connection with new photos that appeared Thursday. He repeated his earlier statements that such men "have no place in the German army" and said "it is in our interest to clear this up as soon as possible."

The scandal has shocked a Germany which has long preferred to see its soldiers as engaged primarily in humanitarian missions rather than in violent foreign conflicts. A number of commentators have criticized the German government for spreading the image of "social workers" in uniform, even as the Bundeswehr has become involved in dangerous conflicts the world over, from Afghanistan to the Democratic Republic of Congo, from the Balkans to Lebanon. The images are especially uncomfortable to Germans accustomed in recent years to lambasting American soldiers for scandals such as Abu Ghraib while imagining their own troops to be beyond reproach.

Now, though, that image has been shattered. "We have to outfit our troops with more intellectual competence and moral values," said Reinhold Robbe, a Bundestag representative who deals with military affairs. The troops have to understand, he told ZDF television on Friday, "that these values apply not just in Berlin or Hamburg, but also during missions in Afghanistan or in the Balkans."

Bild Zeitung also published Friday an interview with a soldier who claims to have been present during the defilement of the skull from the first batch of images. The incidents "were well known even among those with the lowest rank," the soldier told Bild. "It made the rounds, for sure. Some of them found it funny." The soldier also said that those who didn't go along with the defilements were seen as wimps.

The soldier also described the situation during which the original photos were taken. "A skull was picked up," he said according to Bild. "First it was held up and a photo was taken. Then it was mounted on the vehicle -- until the one pulled out his member." He went on to say that they were all under a great amount of stress and were nervous as a result of the numerous accidents and attacks they had experienced already. The soldier also said that Afghans had also displayed little respect for the bones and had often dug around in the pit.

According to a report in the Leipziger Volkszeitung on Friday, incidents of German soldiers posing with bones have hardly been a rarity in the past three years. Indeed, the mass grave where the images originated had become something of an "insider tip" and that soldiers from other countries had participated as well.

The small Bavarian town of Mittenwald, where all of the soldiers pictured in the original images published Tuesday had been stationed, has meanwhile been inundated with German media as the country tries to find out as much as possible about the skull scandal. Despite being confronted with dozens of reporters, television cameras and photographers on Wednesday and Thursday, official statements were hard to come by.

Unofficial ones, however, were not difficult to gather. "Complete idiots," 67-year-old Mittenwald resident Hermann Salminger called the soldiers. "Wood heads. They ruin everything, the town and the special forces. They should be locked up."