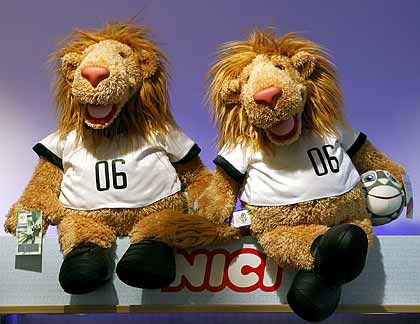 "Goleo" the world cup lion has been a flop.

A German stuffed toy manufacturer that has exclusive rights to produce the official World Cup mascot -- Goleo VI, a shaggy-maned lion in a football shirt -- has filed for insolvency because no one wants to buy it.

Nici AG said this week it was in financial trouble and a court in the southern German city of Coburg confirmed on Tuesday that the firm had filed for insolvency. "We're having problems with the fact that "Goleo" hasn't been a success," the company's marketing director Uwe Klimach told the dpa news agency. "The company is in a serious financial situation."

"The loveable lion", as football's world governing body Fifa describes it, has had a mixed response since he was introduced in late 2004. Designed by Jim Henson Company, which made the Muppets and Sesame Street characters, the clumsy looking figure has more than a fleeting resemblance to Big Bird. It has also been ridiculed for lacking football shorts.

Even his debut on a German game show backfired when show host Thomas Gottschalk wondered out loud whether Goleo's grandmother was a llama.

Professional puppeteers have been donning the 2.30 meter Goleo costume for appearances at Fifa events to advertise the World Cup. It's an unenviable task given that temperatures can reach up to 50 degrees Celsius inside.

Nici, which opened its doors in the early 1970s, reportedly paid €28 million for the exclusive European rights to make a variety of Goleo toys ranging from key rings to two-meter stuffed animals as well as cushions.

World Cup mascots have had a chequered history since the tradition began in 1966 with "World Cup Willy", a lion introduced for the tournament in England.

"Tip und Tap", two cartoon character boys, were well received during the 1974 World Cup in Germany, as was "Naranjito" the talking Spanish orange in 1982. But not many people seemed to connect with the "Spheriks", three computer-animated fantasy creatures that accompanied the 2002 World Cup in Japan and South Korea.

Nici, which makes a wide array of gift items, hopes to remain in business despite the insolvency filing.