Urban congestion, family instability, a shortage of space: All of that will influence how we will live in the future. But are there good ideas for overcoming those challenges? Have some of them already become reality? Is there anything out there that is truly innovative?

"How would you like to live?" was the question posed this year for the sixth annual Social Design Award competition, held by SPIEGEL ONLINE and SPIEGEL WISSEN, with generous support from Bauhaus. We received around 150 entries in total, many of them from Germany and neighboring countries, but some from as far afield as the United States and Ghana. Our jury of experts has narrowed down the submissions to a shortlist consisting of the 10 best projects, introduced below.

Now, it's your turn: Vote for your favorite to receive the Audience Prize! Make your choice by October 22 using the voting tool (in German) at the end of the shortlist. The Audience Prize comes with a 2,500-euro reward.

"Affordable Palace repurposes the Royal Palace into an innovative co-living structure," according to the sedate project description. But the idea behind it is revolutionary: It envisions adding six floors on top of Buckingham Palace in London, offering living space for 50,000 people. The young architects from the Munich-based studio Opposite Office believe that in this era of housing shortages and astronomical rents, it is no longer tenable for the queen to have 775 rooms and 79 baths for herself. 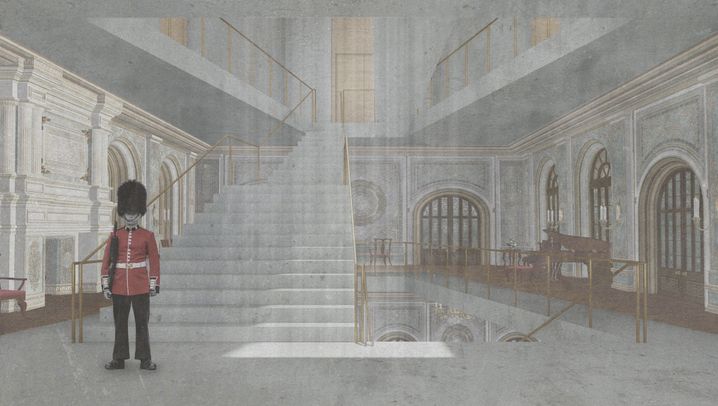 Their project proposal envisions clusters in which private bedrooms surround a joint living space and dining area. Movable walls allow for a variety of different models while the project also calls for rent to be capped at 8 euros per square meter. The carefully designed layout uses the space efficiently and keeps the area devoted to hallways and stairwells to a minimum. The architects are aware, of course, that their idea will never become reality, but they hope their "Affordable Palace" project will serve as a provocative contribution to the ongoing debate over the right to housing and social justice.

If you want to get to know your neighbors, you can set up an account with the internet platform nebenan.de. But what if you're not yet a neighbor at all? And what if you're not just looking for any old neighbors, but want to live in a community-oriented project? This is the vision behind the platform "bring together," established in Leipzig in 2015. It currently links 80 projects with 400 people searching for projects in 11 countries. As of recently, charitable associations and municipalities are also able to set up profiles. 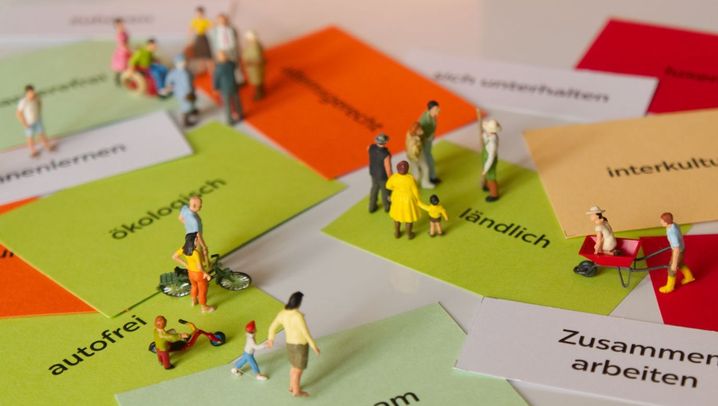 The company Patchwork Communities is behind the initiative. "Our goal is the promotion and realization of communal forms of living and housing, as well as the strengthening of sustainable and solidarity-based processes of societal action. With our project, we want to offer a solution to missing family structures and reacquaint people with community-based thinking."

The Düsseldorf architect and scenographer Hans Hermann Hofstadt leased an urban garden only to realize that he wasn't made for gardening. Reports to the effect that such urban gardens were to be eliminated in large cities in Germany to make way for housing combined with the high rent his daughter had to pay for her student apartment led him to an idea: What if two tiny houses were set up in every urban garden plot for university students or the elderly? 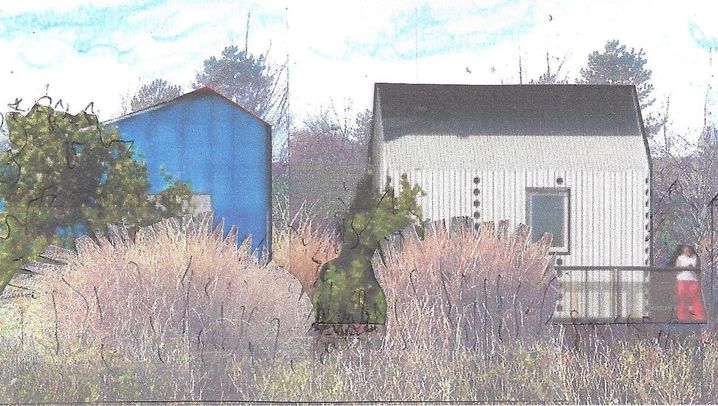 He invited university students to a workshop held in an urban garden to discuss his idea. Hofstadt calculates that if every tiny house costs 30,000 euros, it comes out to a monthly rent of 200 euros to cover the mortgage, interest and ancillary expenses. If 50 percent of the around 1 million urban garden plots in Germany played host to a tiny house, then -- statistically -- you could provide housing for almost every incoming university student in the country. And they just might do a bit of gardening on the side.

Right in the heart of the Ghanaian jungle, near the border to Togo, the village of Havé clings to the shoulder of a thoroughfare. It is home to 8,000 people, half of them children -- making the town's delivery ward one of Havé's most important facilities. It draws from a huge area, resulting in a need for a large number of midwives. But they also have families, and because there was no housing for these families, the midwives often had to live for years separated from their husbands and children. It was a significant problem. 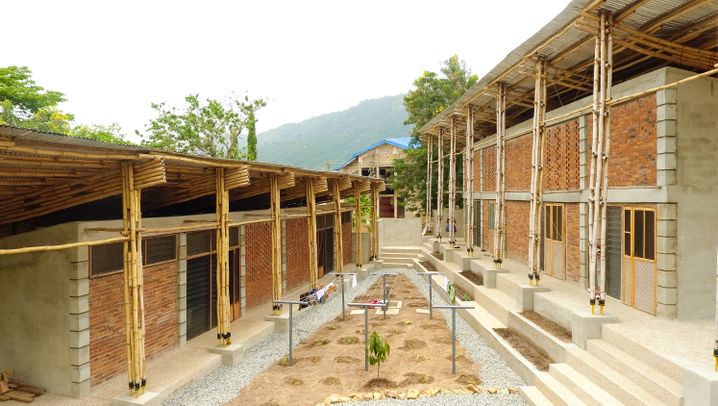 At the initiative of the Cologne-based association Meeting Bismarck, a group of around 50 German and American university students, German vocational trainees and Ghanaian trade school student designed and built a midwife school along with a dormitory with four units, each with 30 square meters (325 square feet) of living space, including a kitchen, a living room and six sleeping spaces. The design invokes the traditional compound housing style, in which families live around a shared living space, and adheres to sustainable concepts such as passive construction. It is specifically designed for the difficult climate conditions in the jungle.

"In large apartment buildings, people live door-to-door, but still never talk to each other." That observation was the starting point for the project "Hinterhof Dinner," or Courtyard Dinner. Because eating together connects people, the Berlin association Kollektiv Plus X came up with the idea of teaming up with another building resident to invite neighbors to dinner. The idea was to share a meal in the building courtyard after cooking together using a portable kitchen. 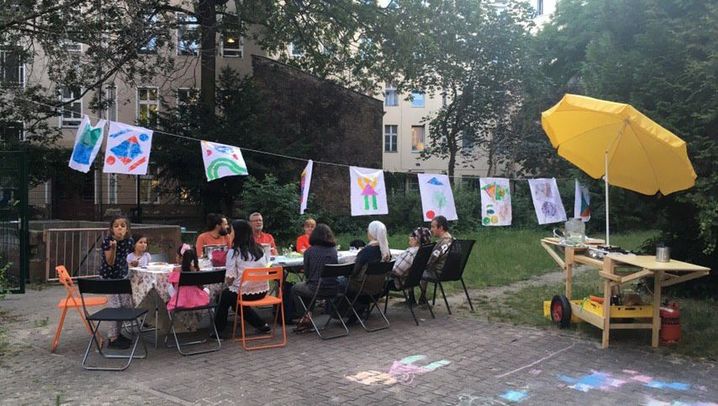 The goal of the meal is to get everyone to enter their details in a list so that they keep in contact with each other. And out of an anonymous neighborhood, a "network of common interests" is born. Kollektiv Plus X is no stranger to such initiatives, having used empty lots for performances in the past. The association focuses on "the intersection between art, urban planning, design and social work."

6. Right in the Middle

It was a bike ride that led to the Hamburg-based duo Gogtile coming up with the idea "Mittendrin," which translates to "Right in the Middle." Riding past the locks on an arm of the Elbe River just southeast of the city, they happened across bridge pillars and a paved path that was once built for something other than a bike path: It was for the train tracks to the concentration camp Neuengamme. Gogtile produced the design for a home as a message "against paving over history." The design envisions a home being built on a new bridge pillar that is connected with the old one by way of a cement platform. 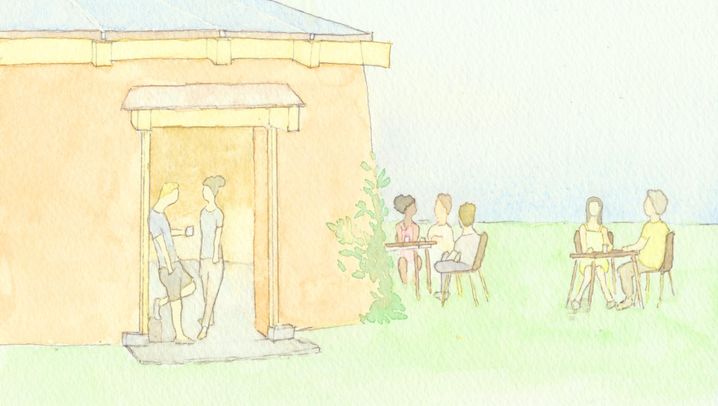 The design calls for the home to be built with environmentally sustainable materials and lived in by people who share their possessions and use recycled furniture. The living room is to be outside in nature, as a café and meeting spot for everyone who comes by. "The design should be understood as an appeal for more responsible living. We shouldn't cut ourselves off from the environment and take a more critical look at our own comfort zones. We should try to think the unthinkable."

Two attempts to buy a piece of property or a building and transform it into a residential project had already failed before they finally found success. In late summer 2016, a group of Frankfurt residents who wanted to live together as a community finally received city approval to purchase an old office building near the train station. 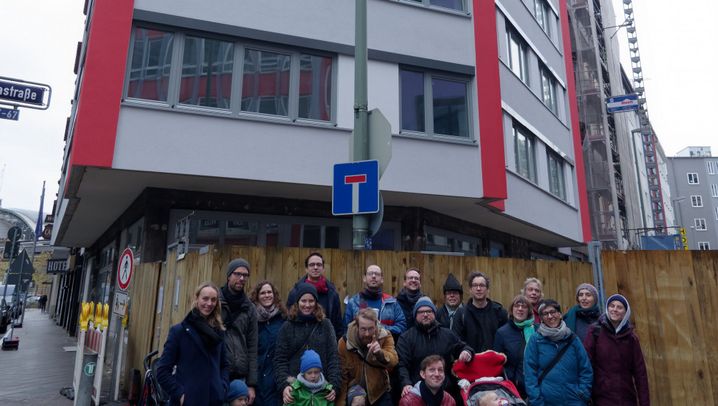 Plans call for all bedrooms to be exactly the same size and there are to be communal rooms on the seventh floor and a shared rooftop terrace. The ground floor features a help center for Roma, a "community room" shared by a number of different initiatives and a third room reserved for art exhibitions or workshops. Since June 2019, 42 people have been living at the site, a project that goes by the name "Nika" and it belongs to the association of self-organized housing projects known as the Mietshäuser Syndikat.

8. Urban Living in the Countryside

A 19th century farmhouse, 1,200 square meters (13,000 square feet) of living space, outbuildings for studios, workshops and co-working spaces -- and all of it on a 60,000-square-meter (14.8-acre) piece of property located 50 kilometers from the heart of Berlin. Those are the vital statistics of the project that a couple from Celle has launched together with their grown children living in Berlin. 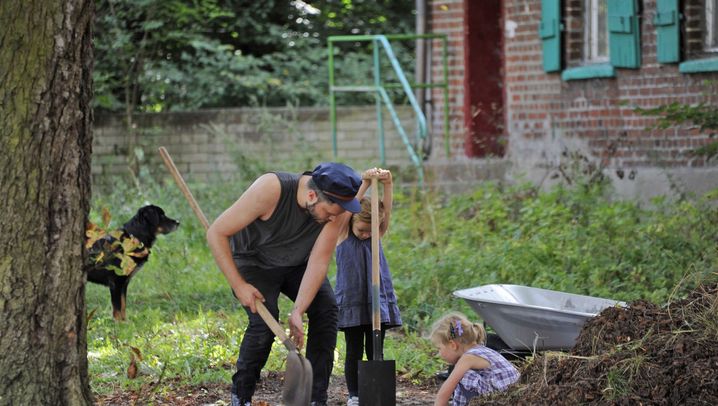 The plan calls for 12 families -- not excluding couples or even singles -- to move into four structures on the property in Brandenburg. It offers an escape from the urban business in Berlin to a more natural setting where cars, bicycles and community rooms are shared as are child daycare responsibilities. Everyone is to be there for everyone else. The project is making progress, with water and natural gas hookups having been completed. Now, the buildings are to be renovated, with loam plaster on the inside and hemp insulation on the outside. The "urban living" part of the project is to include "intercultural events" that won't just be focused on minor art projects but will include discussions on the major questions facing our era.

Why does every new construction project have to be rethought from the ground up? What about coming up with a really good, sustainable concept and then using it at a variety of different sites? The "we-house" from the Stuttgart-based architects at Archy-Nova is trying to do exactly that. Their concept is made up of environmentally friendly materials, uses up to 80 percent less energy than conventional structures, has a leafy façade, relies on recycled water and even has a pool filled with rain water and heated with solar energy -- water that is also used for the plants in the greenhouse.

Cars, bicycles and much more are shared while meals for all residents are cooked in the community kitchen. Communication is enabled by an app developed specifically for the project. Archy-Nova is currently planning to build one we-house near Dortmund and another in Stuttgart, with plans calling for a third to be set up in the HafenCity neighborhood of Hamburg.

What does the ideal city of tomorrow look like? What do we want to keep from the cities of yesterday and today? Those are the questions that the Viennese architects at AllesWirdGut are exploring in workshops and surveys. They view architectural planning as a process in which future users should be involved. Specifically, the visitors to two exhibits, one in Stuttgart and another in the Czech town of Brno. They were able to submit their ideas for a protype building the architects refer to as the "city building block of tomorrow." 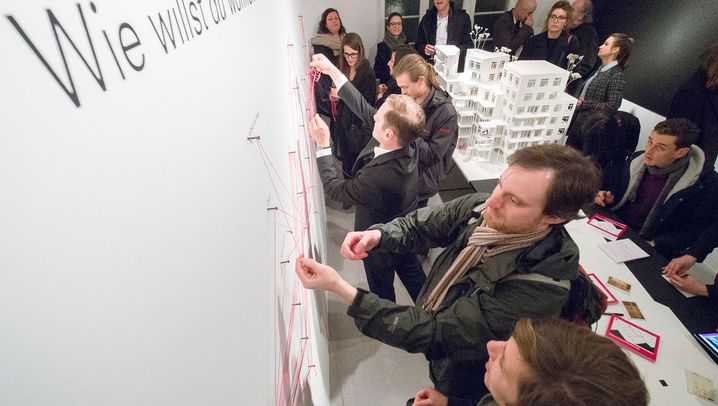 In addition, the office consults with people who have lived in apartments designed by AllesWirdGut. In home visits, residents are asked how satisfied they are or what they find good or bad about the design. The Viennese architects hope that their approach will lead to innovative projects. They believe that architecture resulting from competitions combined with profit-oriented housing construction prevents innovative thinking. 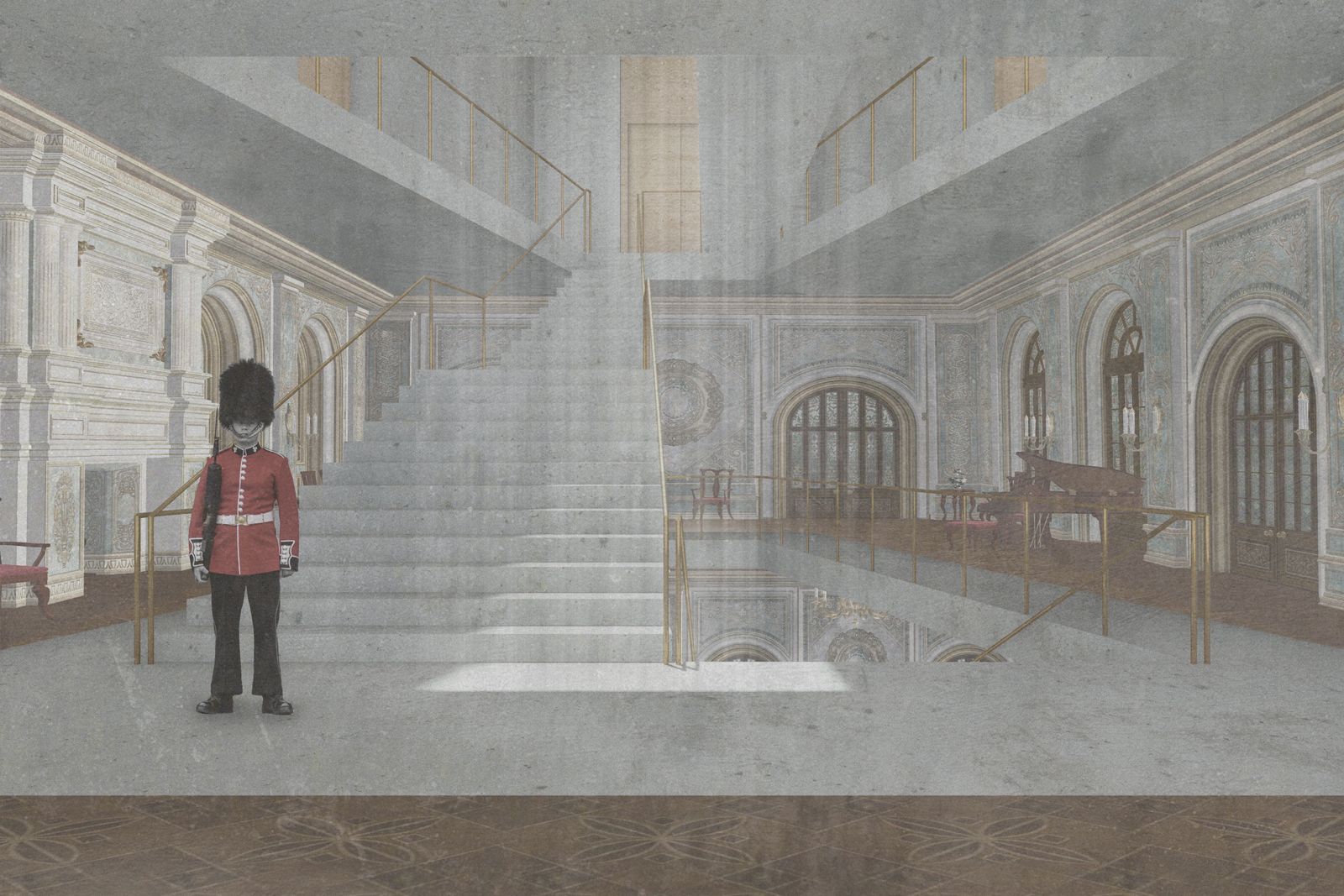 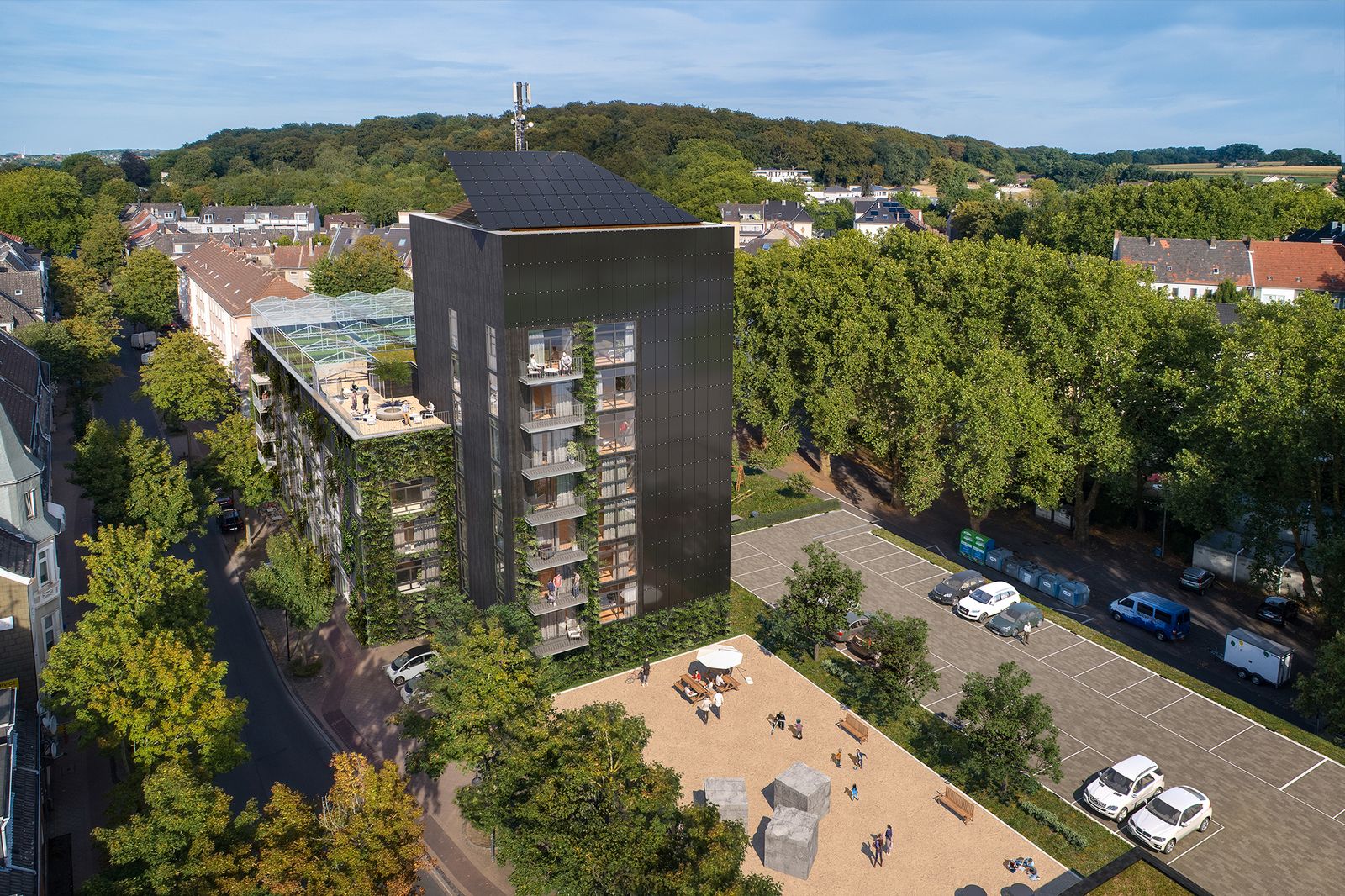 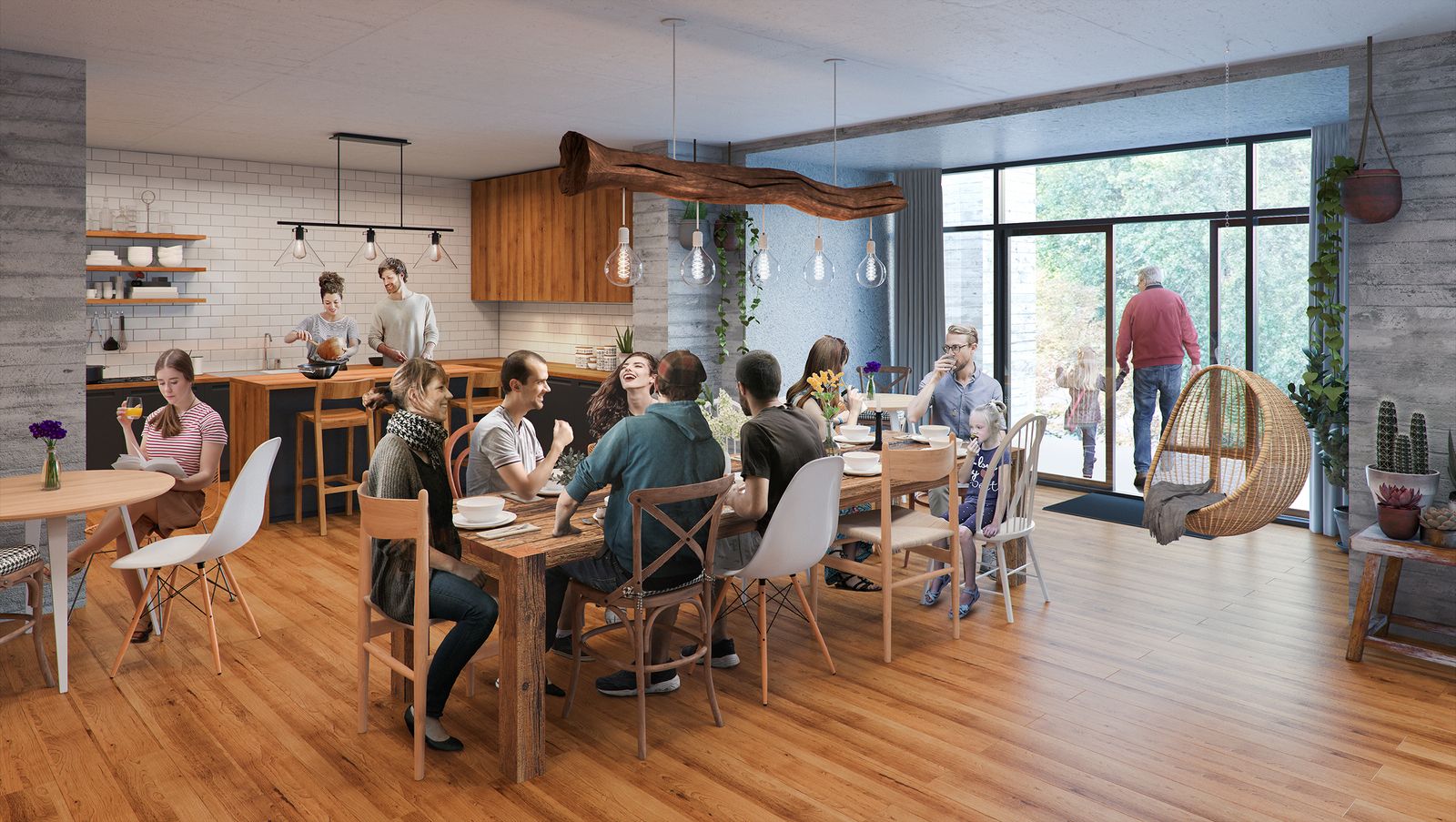