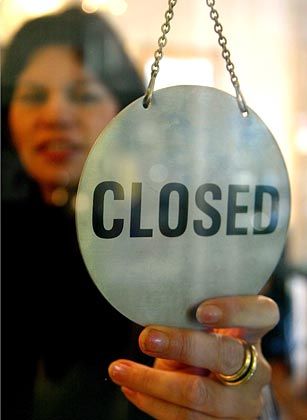 Not an uncommon sight in Germany.

Germans, of course, aren't nearly as serious about observing the Sabbath as the Maccabees were -- that ancient group of faithful Jews who allowed themselves to be slaughtered rather than fight on the day of rest. But just try picking up a frozen pizza or a carton of milk on a Sunday in most parts of Germany. Unless you live in a big city or next door to the train station, Sunday starvation is a serious risk.

Even worse, it's not just Sundays. Should you actually have a job in Germany and be forced to work into the early evening, you can forget about shopping for groceries on the way home. Or filling a prescription. Or trying to bank. Or buying anything that doesn't involve a vending machine. And that late-night pint of mint-chocolate chip you like to dive into when the munchies kick in? If you want to party, you'll have to plan ahead. Stores are simply not open when you need them most.

Things are getting better. Berlin is dotted with small corner groceries -- mostly run by Turkish families -- which stay open late into the night and on Sundays. Some supermarkets also stay open until the unprecedented hour of 8 p.m. Even banks have at least one day a week when they don't close in the mid-afternoon. But Germans haven't discovered the joys of Saturday night shoe-shopping or the emergency bag of chips at 3 a.m. Sundays remain strictly off limits for shopaholics, chronic consumers and those who find it difficult to remember a pharmacy errand on Saturday before its doors slam shut at 1 p.m. (And should you arrive at closing time, don't be surprised to have the door shut in your face.)

The restrictive opening hours Germany do have their advantages. After all, about the only thing you can do on Sunday here is relax, eat a lot, or head to a museum. With the streets empty of big trucks (by law) and building sites silent, a ride through the city or countryside also makes for a pleasant escape. If you get a flat though, don't count on finding a bike shop open to help you fix it.

Torturing consumers with anemic opening hours has a long tradition in Germany. The first such law came into existence in 1900, but was soon strengthened. By 1919, it was illegal to open up shop on Sunday and stores on workdays could only be open from 7 a.m. until 7 p.m. Saturday afternoons later became taboo. Nowadays, political wrangling about when stores can do business has become something of a tradition in Berlin. About once a year the government raises hopes among less traditional Germans that the late-night snack or roll of toilet paper may not be far away.

But don't count on it. Germans like their peace and quiet and a number of businesses would prefer to forgo a few euros than actually sell stuff. Luckily, gas and train stations represent little havens of consumerist sanity. Never lose sight of where the nearest one is -- the markets there are open late. And they generally stock ice cream.