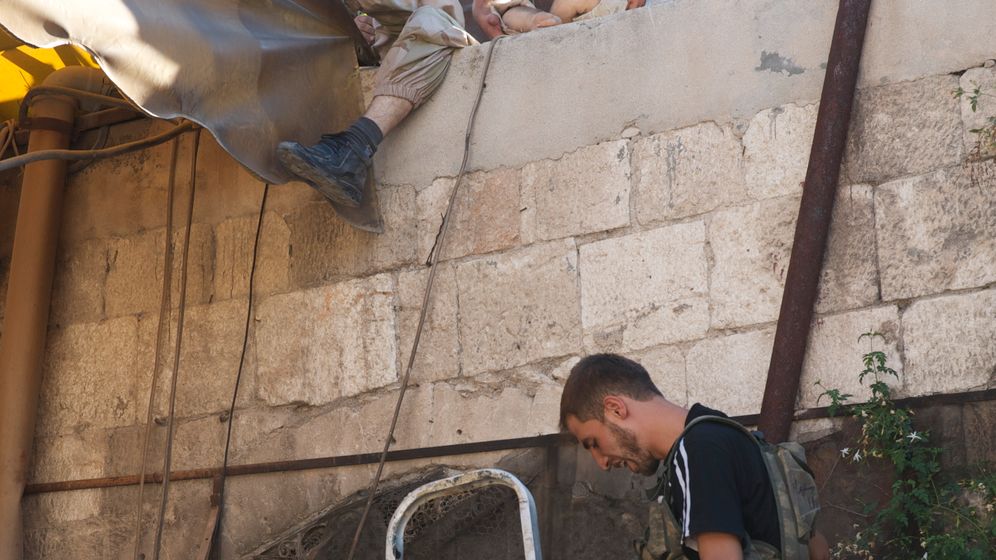 Photo Gallery: The Injured in Aleppo

"I have serious doubts that the two photos accompanying the article 'The Manbij Experiment' on pages 93 and 94 of the print issue are 'real.' I myself and every other layman I pointed this out to immediately noticed that 'something' wasn't right about these two pictures: They seem 'too beautiful to be true,' too arranged, too composed, too much baroque 'Descent from the Cross' and 'Pietà'..."

"Coincidentally, they are from the same photographer and the same agency. Was nobody at SPIEGEL suspicious? Was the authenticity of the pictures verified?"

"Please take this inquiry seriously and not too lightly. I expect a serious answer. And am very curious to know."

As in this reader letter, doubts about the authenticity of these images from Syria were also voiced at the weekly issue critique at SPIEGEL, which was the only publication to print them in Germany (click here to download a PDF of the original German version of the article that included the photos). It was pointed out that the two photos seemed too perfect to be real, and that the scenes brought to mind the crucifixion of Jesus.

A translated version of the story ran on the SPIEGEL International website, but without the photos in question, because we were unable to clear the digital rights for those images at the time. They appear today for the first time on the English-language website to accompany this editors' note.

An injured civilian in Aleppo / Photo originally appeared in the print edition of SPIEGEL and has been published online in the context of this SPIEGEL Blog entry.

SPIEGEL obtained the photos from the photo agency Getty Images. It is a reliable source, but the photographer, Elias Edouard, 21, is a freelancer rather than a regular member of staff. Freelancers live off the royalties they get for the use of the pictures or from the wages they are paid for individual photo commissions. War photography lends itself to quick fame, just like paparazzi photography. For some photographers it may be tempting to achieve quick fame by staging or enhancing a shot. In Syria especially, both sides in the conflict have misappropriated photos and videos for propaganda purposes.

SPIEGEL is the only German media organization that has had its own journalists and photographers in the country from the start of the conflict. But no SPIEGEL staff member was present when these particular photos were taken. For that reason the magazine's photo desk scrutinized the entire output by photographer Elias Edouard very closely before publishing his work.

The print edition of SPIEGEL is also the only media organization in Germany with its own photo verification department. It has a staff of seven who vet whether photos are genuine. To verify images of people, for example, photos from different sources are compared. We closely check the locations and captions provided by the photographers and agencies.

The second photo that appeared in SPIEGEL

Our research into the Syria production showed that Edouard had spent a day with the wounded in Aleppo. "For the large image showing the provisional hospital in Aleppo, we particularly scrutinized the details of the uncropped image," says SPIEGEL's Tobias Mulot, who verified the photos. On the right side of the original photo one can see a doctor with latex gloves tending to a seriously injured Syrian. The doctor can hardly be seen in the printed photo.

In the second photo (left), which shows a wounded resistance fighter being lowered from a wall, the wound in his back isn't visible, but it becomes clear in the photo gallery above.

Additionally there is this video footage of the hospital (please beware before launching that the violence which it depicts is very graphic, particularly in the beginning):

Despite scrupulous research, mistakes can still be made. Images can be easily and convincingly manipulated using image editing software. So we confronted photographer Edouard with our concerns about his images. Here's his answer:

"I can understand that readers mistrust images, but I also hope that they not only consider the authenticity of the photos, but that they also empathize with what the Syrian people have been experiencing living under constant fire the past 19 months. I hope that my series helps open people's eyes."

The wounded man on the wall is Abu Steff. He was shot by snipers near the historic city center. He survived.

The person in the middle of the other photo is a woman who covered her head with a bloody cloth, either out of shame or Muslim tradition.

You can also visit the website of photographer Elias Edouard. 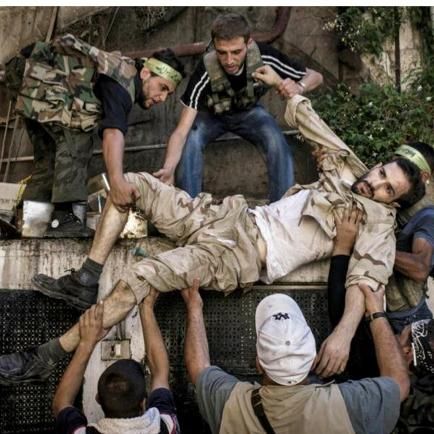 The second photo that appeared in SPIEGEL