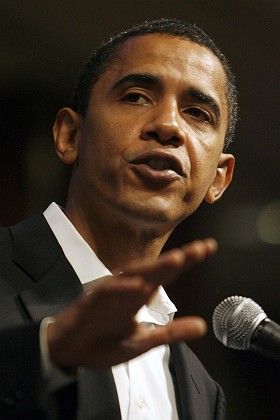 Senator Barack Obama has his eyes on the White House.

SPIEGEL: Barack Obama seems to be developing a compassionate liberal answer to the so-called "compassionate conservative" platform US President George W. Bush ran on in 2000. Is the Democratic Party looking to take more care of the religious voter?

Rev. Jeremiah A. Wright Jr.: I wouldn't say "more care." The United Church of Christ has a 350 year history of being on the side of social justice. Our denomination was against slavery. We were a part of the Underground Railroad; part of the abolitionist movement. So its nothing new for us. What is new is that Barack says we need to stop being afraid to talk about our faith and how our faith and values influence public policy and the decisions we make. Weve been biting our tongues because we dont want to offend our Jewish friends and our Muslim friends. The new movement is toward not being afraid to talk about your faith. But you should also stop thinking you have absolute truth -- that your faith is the only one.

SPIEGEL: Isn't that the nature of faith, though? Believing strongly in your faith to the exclusion of others?

Wright: Were not on this planet alone. Right now, the average American or the average German or the average Brit couldnt tell you the difference between a Sunni and a Shiite. I mean, you got Christians who lynch people in the name of Jesus, and you got Muslims who fly planes into buildings. But you got some Muslims who dont do that. You got some Christians who ain't got time to lynch people. We need to stop lumping folks together and start living together. Otherwise, were going to kill each other off because you dont believe what I believe. Thats crazy. Before Democrats were quiet because they didnt want people to think they were fanatics. Barack has broken that ice.

SPIEGEL: But how far can you go? As Barack Obama points out in his book, "The Audacity of Hope: Thoughts on Reclaiming the American Dream," religion is more about convictions and truth, whereas politics is about compromise. Where are the limits to introducing faith into the political arena?

Wright: Lets take a simple issue. Far right radical conservative Christians want to put prayer back in the school. Now my family may start off the day in prayer, and Im going to teach my daughters and my sons how to pray. But Im not going to force your kids to pray like my kids. In public, I have to understand that Im still going to pray tonight and tomorrow morning, and my girls and my son better pray too. But Im not going to force my Jewish friends, my Muslim friends, my Hindu friends, my Sikh friends to hear a Christian prayer in a public forum like school. We understand that private faith does not force public decisions. Thats how you work at compromise. I havent given up what I believe, but I live in community with -- in a city, state, nation, and world with -- people who dont believe what I believe. That doesnt make them defective or inferior.

SPIEGEL: That sounds different from what Obama wrote in his book. He wrote that faith should return to the center of both private and public life. Should he ever become president, what would that mean?

Wright: From what I know of Barack -- from what he has written, from his speeches and from the life I know he has lived -- faith in public life does not mean that God tells you to bomb another country or to go get Saddam Hussein. Faith in public life means that every child, regardless of their religious belief, should have health care. That every child should be able to go to school based on the intelligence they have not only the ability of their parents to pay. Because my faith saying I can bomb Iraq is the same as your faith saying you can take over a passenger plane and fly it into the World Trade Center.

SPIEGEL: Can you be a good Christian and be pro-choice?

SPIEGEL: You mean it's a purely political question and faith has nothing to say about it?

Wright: First of all, we shouldnt even be having this discussion. Neither one of us can get pregnant. But what a woman decides about her body and her God is her business. Women who are pro-life can be just a good a Christian as a woman who is pro-choice and vice versa. It gets to be a problem when I decide one position should be the law for everybody. In public life, we have to find a way to live together even though we disagree -- and some things we will never agree on. But we've got to leave this I'm-going-to-kill-you-because-you-don't-believe-what-I-believe attitude behind.

SPIEGEL: So why bring faith into the public arena at all, if it's so divisive?

Wright: Faith should be pulled into the public arena when it affects how we live. If it doesnt -- if its so heavenly focused -- it does no earthly good. What does my faith say about 44 million people with no health care? What does my faith say about the fact that my girl cant be a nuclear physicist because shes black and from the inner city and because her schooling options are not what they are for George W. Bushs girls or for Bill and Hillarys daughter Chelsea? My faith says, no, thats not what God intended. It pulls it back into the public arena the idea that theres got to be something fair for all of us.

SPIEGEL: Do you think Obama would be able to win Christian voters back from the Republicans were he to become the Democratic nominee for the White House?

Wright: Thats hard to tell. If the pattern of what we saw in the November elections -- where evangelical Christians, whether Republicans or Democrats, abandoned the stay-the-course doctrine, abandoned the years of lies -- if that pattern continues, I think politicians like Barack are going to win people back. Were making more enemies than winning friends at the moment. Were making enemies because (what the Bush administration is doing) is not Christ.

SPIEGEL: Thousands of people listen to your sermons. Can you as a pastor help move voters from the right side of the political spectrum back to the left?

Wright: First of all, not that many people are church goers. But that's America in general. That said, historically, the black church it has been the political force. It caused blacks to fight to get out of slavery, for example. African-Americans used their faith to not lose hope and to keep on fighting. A clergy person needs to be aware of that and needs to keep in mind the clergy's role in changing the public life for the betterment of all. Not just those who believe like I believe, look like I look, think like I think, live where I live. But for all. How do we treat the most vulnerable in this society? What are we doing for our old people? What are we doing for our kids? What are we doing for our poor? The clergy need to put those questions on voters minds.

SPIEGEL: Barack Obama has been criticized as a so-called "post-racial politician" who shies away from those interests traditionally important to black voters in the United States

Wright: I think that criticism is unjustified. Its a cute term, but he shouldn't be criticized for who he is -- a person who doesnt play the race card, but who instead talks about the issues. Look at it this way. Nobody wants their wives to live in fear of getting from the house to the grocery store or to her job. Whether they're black wives or white wives isn't the issue. I dont care what color they are. The bullets dont discriminate. We've got to do something to make sure they have a safe environment. Now to call that post-racial is unfair. Weve got some common needs that we need to address. How do we put policies in place that will ensure their safety in the future? Thats the kind of politician Barack is.

SPIEGEL: Do you think he will be President in two years?

Wright: No. Unless Barak pulls off nationally what he was able to pull off locally, and wins the hearts and minds of people who have been perennially anti-black. Racism is so deeply engrained in this country that he could be flawless in terms of his policies. But he's still a black man in this country, which has a sorry history in terms of how it sees African-American males. Thats my 65-year-old, jaded perception of where this country is. I was pleasantly surprised in the Senate election. I would like to be as pleasantly surprised in the presidential election.

SPIEGEL: Rev. Wright, thank you very much for taking the time to speak with us.