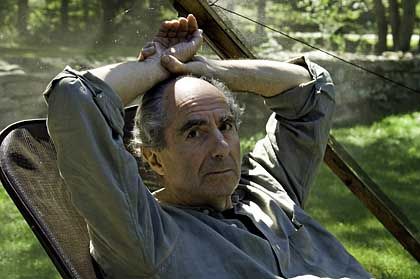 Novelist Philip Roth takes a closer look at death with his novel "Everyman."

SPIEGEL: Mr. Roth, your new book "Everyman" takes its title from an anonymous 15th century allegory. The Austrian writer Hugo von Hofmannsthal did the same in naming his 1912 play "Jedermann" ...

ROTH: ... but he kept the Christian perspective. And the allegory. And it's didactic. Mine is not didactic. It's not allegorical.

SPIEGEL: So why did you take the title for your book?

ROTH: I didn't begin with it. Along the way I had various titles. Only at the end did I remember this play, which I had read in college. I hadn't read it since 1952, 54 years ago. I re-read it, and I thought this is the right title. But I wasn't thinking about the medieval drama when I was writing my book.

SPIEGEL: What were you thinking about when you got started? What did you want to achieve?

ROTH: To tell the story of a man's life through his illness -- through the physical threats to his life. The narrative line would be dictated by the history of his illnesses. I thought of other books about illness. You might imagine there'd be a lot. There aren't. There's the famous "Magic Mountain" by Thomas Mann, there's "The Death of Ivan Ilyich" by Tolstoy, and Solzhenitsyn's "Cancer Ward", which is a wonderful book. Beyond that, there are very few that I know of where illness is the central subject.

SPIEGEL: An interesting observation. What do you think your colleagues are afraid of?

ROTH: Why are there more books about adultery than about emphysema and cancer and diabetes? I don't know, but I wouldn't say it's because of fear. I suspect that I'm not the only writer in the world whose attention has turned to illness. We experience a lot more illness than people did in the 15th century, because now, by and large, people are kept alive for quite a while before an illness finally kills them. Nowadays, you call your friend to ask whether his radiation treatment is over or how his biopsy turned out. We're all very knowledgeable about medical matters these days. That too may account for how I came to write this book.

SPIEGEL: "Everyman" is rather short for a novel -- kind of like your earlier book "Dying Animal." Do you see yourself writing shorter books in the future?

ROTH: As my energy declines, that may happen. I liked writing the "Dying Animal". And I wanted to try again to write a book of that length. You have to have a story whose impact is immediate if it's going to be this short.

SPIEGEL: Yet "Everyman" starts quite slowly.

ROTH: With the funeral. Then comes the childhood and his early education in mortality, starting with his observation of the little boy in the hospital bed next to his who dies.

SPIEGEL: But even though the book begins with his funeral, the reader spends much of the book hoping the hero doesn't die. Do you see the fact that he doesn't suffer as a kind of happy ending?

ROTH: What it is for me is neither here nor there. I don't experience either grief or happiness because of the fate of the character. What I have to experience is the sense of the inevitability of that fate. I want the reader to know from the outset that this man's dead and who the people are at his funeral and what they say about him there. Once that's established, I give you the life in the history of his physical crises and his final catastrophe.

SPIEGEL: Why doesn't the hero have a name?

"Everyman." Because old age is a massacre.

ROTH: That was an accident, to begin with. I had no idea that I hadn't named him until I sat down to read the first draft. And then I decided to let it stand. Let him be defined by his relationship to others, to his father and mother, his brother, his wives, his daughter. We may all feel defined by our names, but, in fact, what defines us is our relationship to the network of people we know. That's who we are.

SPIEGEL: What about the funeral in the beginning? Does it mirror one you've been to recently?

ROTH: I had lost about three or four friends over a period of a year. Your friend falls ill, he dies, and then you go to the funeral. Saul Bellow was the last and he was the person I was closest to. I have been looking into so many graves of late, I thought, well, it's time to write about it.

SPIEGEL: You started writing the day after Saul Bellow was laid to rest. What was his funeral like?

ROTH: There were probably 120 people in a little cemetery in a little town in Vermont. It was pretty strong stuff for everybody. This man's greatness added another dimension to one's response. A great man had died. There are very few great ones in our midst. That adds a certain twist to the grief.

SPIEGEL: It can perhaps be assumed that the most quoted sentence from your book -- if it isn't already -- will be: "Old age isn't a battle, it's a massacre."

ROTH: I was watching television news about the floods in New Orleans while they were evacuating the old people's homes -- and I did say aloud to the person I was with, "old age is a massacre." It looked as though they were removing people from a battlefield.

SPIEGEL: Did this thought, and the subject matter, make this book more difficult to write than your previous works?

SPIEGEL: But it may do so for the readers. You write that nothing helps one come to terms with the knowledge "that you are born to live and you die instead."

ROTH: No, nothing helps. Folks just do their best to put aside that knowledge. There are those who have the consolation of a religion which promises them that they won't die. I don't see how they can possibly believe it but then people can believe all sorts of things for which there is absolutely no evidence. Most of my older friends say more or less what I say, which is that I think about dying less now than I did when I was an adolescent. The first discovery was so shocking. Death seemed so unfair. That's what you think when you're 14 -- that it's so unfair, and ridiculous. I think the closer death comes the more people try to just not think about it. But then there are those who are plagued by it. I remember the poet Robert Lowell who was my senior by 22 years. And he said to me that over the age of 50, not a day goes by when death doesn't enter your mind.

SPIEGEL: But that's not been your experience?

ROTH: No. I only think about it every other day. But at this age, even if you don't think about it, you're reminded of it because of the disappearance of your old friends and all the hospital visits you make to the ill and dying. This friend is having radiation, that one is having chemotherapy. It is almost a weekly occurrence that someone has a melanoma removed. This wasn't so when one was young. I remember my parents talking about their friends who were sick or dying, and even though I was in my 40's by then, I didn't understand. I think there must be some biological safeguard built in that doesn't permit people under a certain age to really grasp that death goes on all the time and overwhelms everything. Even when my parents were losing some of their dearest friends, I listened. But I didn't grasp all they were losing. I do now.