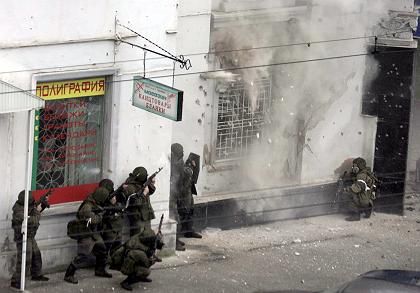 In the southern city of Nalchik on Friday, Russian special armed forces storm a shop defended by rebel gunmen.

Nalchik is a small Russian city and capital of the Kabardino-Balkar province in the northern Caucuses. Known mainly as a health and tourist resort, Nalchik has long been a calm, isolated refuge.

On Thursday morning, though, Nalchik's peace and quiet was shattered, as the town became a frontline in Russia's on-going war against Chechan nationalism and Islamic extremism. An armed group of unknown number -- estimates range from 60 to 300 -- rampaged through the city, opening fire at police stations and government buildings. Police retaliated. After the noise died down, the grim results were revealed. The body count was high -- 85 had been killed, among them 12 police officers and 12 civilians -- and hostages were being held by rebels in a police station and an antiques store.

President Putin responded with a characteristic hard-line stance: shortly after the chaos erupted, 2,000 Russian soldiers were dispatched. They sealed-off Nalchik, and acted on Putin's orders to clear the city of militants, by any means necessary. According to the distressed mother of one hostage, government-led negotiations with the hostage-takers were conspicuously absent in Nalchik. Considering Putin's previously botched attempts to free hostages by force, her distress was probably justified.

Fortunately, though, Friday morning's military raid to free the hostages was successful -- none of the hostages were injured, and all of the hostage-takers were apparently killed. Gennady Gubin, the premier of the province, felt confident enough to announce on Friday that, "all points of rebel resistance have been suppressed and hostages freed. Now the security forces are conducting a sweep of the city to find rebels who are hiding."

Tension has been increasing in Russia's North Caucusus for more than a year. Unemployment in the region runs as high as 90%, and many are beginning to chafe under the iron rule of the regional government. In addition, the government has closed mosques, a move which has done little to stem the growing support for Islamic extremism in the region.

Nalchik lies 100 kilometers from Beslan, another once-quiet town that also has its own memories of violence and chaos.

UN Takes a Step Back From Sudan 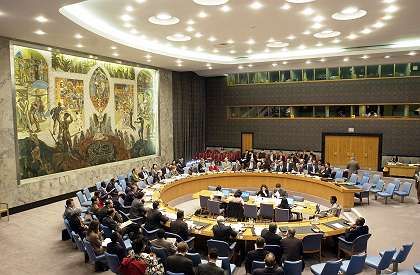 The United Nations Security Council in New York warned on Thursday of a worsening situation in Darfur. The UN has now decided to withdraw most of their staff out of the region of West Sudan.

As violence in Darfur continues to rise -- last weekend the first African Union peacekeepers were killed in Darfur and 38 people were taken hostage by rebels -- the UN has decided that it's going to play it safe, announcing on Friday that all of its non-essential staff will be evacuated from the region. UN representatives say the decision is a precautionary measure, in anticipation of the potential need for a future total evacuation from the area.

The impact on humanitarian efforts remains unclear -- though largely because most humanitarian efforts in the area have ceased to function. Attempts at providing food and provisions have been largely unsuccessful, with aid workers confined to West Darfur and roads closed due to attacks. As a result of rebel fighting 650,000 refugees have been deprived of UN aid relief in the past week.