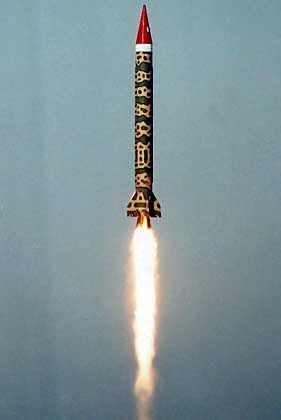 One year ago, Pakistan successfully test fired its first atomic weapon. Iran wants to become a nuclear player, too. Not if the US and the EU can help it.

You have to hand it to the Iranians. They certainly are master spin doctors. They keep breaking their no nukes promises to the West and then turn around and charge that it is the West that can't be trusted. Their standard line: they are only enriching enough uranium to use for energy -- not enough to make bombs, as is permitted by the 1970 Non-proliferation Treaty. Problem is their leaders have made it clear that they don't much like being surrounded by nuclear players (Pakistan, Israel, India) without having a ball of their own. Then there are the nasty little rumors that keep circulating -- like on Friday, when prominent Iranian exile Alireza Jafarzadeh asserted that Iran has been clandestinely smuggling a highly sensitive material that could be used to encase a nuclear warhead atop a missile into the country. And unfortunately, their facilities are almost as easy to dismantle and move as a set of Lego blocks. It does make you wonder.

On Tuesday, Iran's chief negotiator, Hassan Rohani is expected in Brussels for another round of negotiations about Teheran's nuclear dreams. The Iranian stance is that after two years of kowtowing to Europe and freezing their program in hopes of convincing the West they can be trusted, they don't know what else to do to prove worthy. The European position is that if Iran doesn't come clean, the mullahs are going to have a much tougher foe to contend with than soft, incentive-offering Europe. Indeed, if Iran storms away from the European negotiating table, it could set the stage for a face-off between Iran and the US. And US President Bush has made his disdain for the mullahs abundantly clear on numerous occasions.

Still, Teheran is standing firm. In an interview with SPIEGEL, Mahmoud Mohammadi, deputy head of the National Security and Foreign Relations Committee of Teheran's parliament, explained Iran's position going into the talks:

SPIEGEL: The West feels that Teheran has made false statements and has been deceptive. Also it assumes that Iran is secretly working on a nuclear bomb.

Mohammadi: If we have made mistakes, these were caused by insufficient technical specifications or false phrasing in the protocol. The truth is, the last report of the International Atomic Energy Agency in Vienna agreed that our nuclear program adhered to peaceful goals. We are not working toward building nuclear weapons, but are looking for a peaceful way of using nuclear energy. Nobody can refuse us that.

SPIEGEL: What do you accuse the negotiators of the European Union - German, France and Great Britain -- of?

Mohammadi: Europe has abused our trust. Now the Iranian parliament's patience with the Europeans has worn out. With a great majority, we have passed a law through parliament that requests the government to continue its peaceful nuclear policy...

SPIEGEL: ...and has thereby exerted pressure on the government.

Mohammadi: There are two parliamentary groups that want to go further. One wants to quit negotiations immediately, the other one even calls for exiting from the Non-proliferation-Treaty. Only a minority still wants to give the negotiations a last chance.

SPIEGEL: Through its rigid stance, Iran risks a rupture in its relations to Europe. And so far, Europe has tried hard to be a moderator between Teheran and Washington.

The Oscar-nominated German film, "The Downfall" ("Der Untergang") -- which depicts Hitler's frantic final days in his bunker -- has opened in Israel to the same sort of fascination it has been met with around the world. Initially, Israeli film distributors and cinemas were tentative about buying and showing the film, for fear that audiences caught up in the drama of worldwide celebrations to mark the 60th anniversary of the end of World War II would either boycott it or protest. On the contrary. It has sparked great interest, even among the young.

Its strength is apparently its authenticity. Tommy Lapid, 73, the only member of the Israeli Knesset who is also a Holocaust survivor, not only called the controversial film "good docu-drama," but told SPIEGEL that one scene even made him laugh out loud. It was when Hitler -- knowing the war was lost -- quickly married his long-time mistress, Eva Braun. During the underground ceremony, the judge marrying them flatly looks at Hitler and asks if he can prove he is of Aryan descent.

Lapid also praised the acting of the Bruno Ganz, who plays Hitler and said he found the film "very believable. And I have read almost every book written on the Hitler bunker. I went into the film feeling somewhat critical, but it did not upset me or make me feel slighted emotionally." Some critics have attacked Oliver Hirschbiegel, the film's director, for humanizing Hitler (showing him passionately kissing Braun and spilling sauce on his uniform) and for making almost no mention of the Holocaust. To this critique, Lapid has a succinct retort. "The Nazi period is naturally, from a Jewish perspective, Jewish history. But I can't blame a German director who set out to make a film about the last days of Hitler for not including this part of the history in the film." He also told SPIEGEL he has nothing against a more human portrait of Hitler and that perhaps seeing Hitler as an unfeeling monster takes away from the awful truth. "The lesson of the film is that if one person can initiate so much horror, then so can every person." (11:45 a.m. CET) 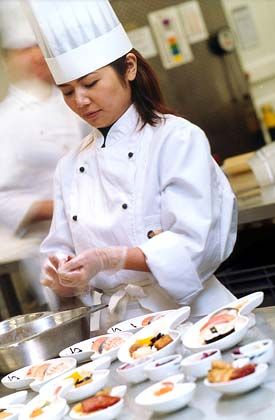 You may think you are eating sushi the Japanese way, but at least one ancient custom is rawer than the fish.

In a move certain to disappoint sushi afficionados around the world, the Chinese government has banned restaurants from serving meals on the bodies of naked women. The practice -- apparently a centuries old custom that has always appealed to a "certain type of Japanese businessman" -- has been carried on meticulously by several restaurants in China, including one in the Yunnan Province which regularly paid two female university students to lay on their backs and act like serving trays. The meal, consisting mainly of sushi, cost 1,000 yuan, ($120). We haven't found any papers brazen enough to describe exactly where the raw fish was placed, or how the meal was eaten, but a blurry photo in the China Daily shows a woman adorned from torso to knees with food, flowers and shells.

The Chinese media has, naturally, gone into overdrive reporting the story. Still, some of the salient facts remain murky. For instance, some report that the ban came about because of the obvious hygienic concerns associated with the practice. Others report a more American-style outrage, claiming that consuming food in such a way "insults people's morality." Still others see it as an affront to women's rights and human dignity. Finally, the politically-minded view the ban as another chapter in a series of ongoing anti-Japan jabs by the Chinese. While the ban is not as obvious as the rioting that broke out last month after the Japanese printed new schoolbooks which downplayed atrocities committed by Japanese troops in China during World War II , it is indicative of the angry emotions beneath the seemingly placid veneer on Chinese-Japanese relations.

The new law, issued late Friday, officially states that nudity is not permitted for dining and entertainment purposes. The consequences are far-reaching. A restaurant in the Hunan province will be forced to strike its signature dish, "meals on breasts," and an art exhibit in southern China will have to be dismantled because naked models are used in the exhibit. (11 a.m. CET)

Absurd costumes, cheesy dance numbers and lacklustre voices....of course, we're talking about the Eurovision song contest, the top television event of the year in Europe and the one thing that really unites the continent. One hundred fifty million viewers across Europe and including Israel watched bands and singers representing 24 countries and called in their favorites in the ultimate show of democracy. And as a great show of democracy, it was almost poignant that Eurovision's 50th annual contest took place in Ukraine this year. To great applause, President Viktor Yushchenko came on stage to hand out a special award.

This year's clear, though undistinguished, winner was Helena Paparizou for Greece and her song "My number one." She followed the recent formula for success which calls for sexy little outfits and athletically suggestive dance moves. But people watch the show for the lovely little oddities. Like the Moldavian grandmother banging the drum with her grandson's rock group, the Romanian rock chick who banged drums and screamed more than sang, or the glam rock dude from Norway, wearing a silver spandex suit and clearly in the wrong decade. The real highlight is the scoring process in which each country calls in its votes for the contestants -- and it launches more conspiracy theories than figure skating competitions.

Although the contest has descended into banality recently, Eurovision has had its moments in its 50 year history. Hits like Cliff Richard's "Congratulations," which was the winner in 1968 and "Nel blue, dipinto di blu" -- better known as "Volare" -- won for Domenico Modugno in 1958. And perhaps the greatest success story of the Eurovision awards was the launching of the career of Swedish supergroup ABBA, when they won with "Waterloo" in 1974. No one expects this year's winner to turn into a classic, but at least Helena did better than Gracia, Germany's entry. Her song, "Run & Hide," came in dead last. (10:23 a.m. CET)