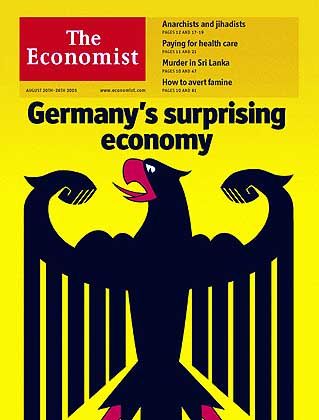 Keep your pecker up, Germany. Your national economy could have more muscles than you think.

With an election due in September, politicians continue their lament about the woes of the German economic crisis. But, one respected voice begs to differ. "The Economist" leads this week with a surprisingly chipper feature on German economic recovery. According to the magazine, the good times are just around the corner. For years now, Germany has been the underperforming sloth of the European economy. Weighed down by the astronomic costs of reunification and burdened with an expensive welfare system, the German economy is struggling. Unemployment is hovering around the 5 million mark, economic growth is practically zilch and consumer confidence has struck rock bottom. Germany has become one of the costliest places to do business in the world: in short -- Germany PLC looks to many like it's on its last legs.

But is all this negativity rather misplaced? "The Economist" certainly thinks so. Germany's national symbol -- an eagle - spreads its wings across this week's magazine's front cover and flexes its economic muscles. The eagle proudly sits beneath a striking headline: "Germany's surprising economy".

The magazine believes that Germany is back in business. "Germany, which has for so many years disappointed on the downside, could be about to surprise on the upside," its commentary declares. "Europe and the rest of the world have become so used to Germany's economic malaise that they have largely missed the recent signs of its revival."

Importantly, this world-famous economic journal is renowned for its precision of language and meticulous attention to detail. "The Economist" does not do "informed guesswork"; it does "logical, reasoned opinion." Accordingly, this opinion is respected around the world. So if "The Economist" is predicting an economic recovery in Germany, it's probably worth paying attention.

The magazine praises Germany for recent moves made to stimulate the economy and reduce business costs. German companies are congratulated for implementing restructuring operations and reducing over-wieldy cost bases, which have now made these businesses far more competitive and more profitable. Workers are beginning to accept longer hours and/or wage cuts in order to improve business performance in a global market. Unemployment is beginning to fall and social security reform has caused many more Germans to seek work. There is light at the end of the tunnel.

Admittedly, problems remain. Consumer confidence remains weak, says the magazine: the fear of losing one's job has stopped Germans splashing the cash. The government is hugely indebted, and a demographic crisis looms, as the population ages and births decline sharply.

But on the whole, the outlook has not looked so positive for a generation. Perhaps politicians and the electorate should not be so despondent after all. Though pointedly, in concluding, the magazine sounds one further note of caution.

"The story from Germany is about to become surprisingly good," its commentator writes, "so long as the politicians do not foul it up after next month's elections." 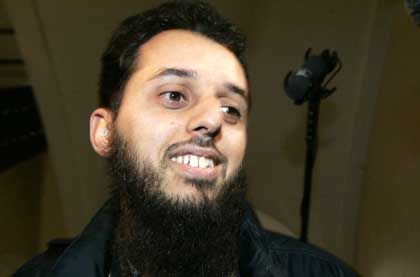 Motassadek may have been smiling as he entered the courtrooms on Friday. Odds are though that the grin had been wiped off his face by the time he left on his way to a seven-year jail sentance.

It may have been slow in coming, but four years after his arrest in Hamburg the Moroccan man suspected of assisting in the 9/11 attacks has finally been put behind bars. Mounir al-Motassadek, 31, was sentenced on Friday to seven years in prison for belonging to a terrorist organization.

Although you might think that minor facts like the odd stint in an al-Qaida training camp and financial support for the 9/11 hijackers might look just a teeny bit incriminating, it has proven incredibly difficult to make any charges stick. The original sentence of 15 years was overturned in March 2004 due to lack of substantial evidence, leading to a year-long re-trial.

Despite proof that Motassadek provided support to the 9/11 hijackers -- such as handling money transfers while they were in American flight training schools -- he has consistently denied knowledge of the attacks on New York and Washington.

While it could be argued that you would have to be extremely dim-witted to remain oblivious to your room-mates' plans to fly a plan into the World Trade Center and murder thousands of people, no evidence has ever been found that he actually knew of the attacks. His argument? His favors for the hijackers were simply part of "being a good Muslim."

And although there have been worries that Motassadek was about to get off scot-free, the German legal system has been widely praised for not Gauntanamizing the trial and just slapping him in an orange jumpsuit and a cage anyway.

In the event, the court cannily focused on what could be proved and decided that just even being in a terrorist organization was hardly conducive to the greater good of society. This proof only came to light in the re-trial, thanks to evidence from al-Qaida suspects, intelligence which had previously not been provided by the US. 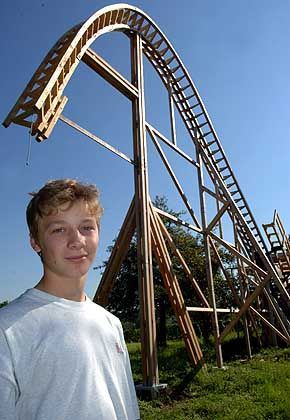 David Mossmann, 14, in front of his creation

Fourteen-year-old David Mossmann from Germany certainly isn't like other kids his age. While they are busy watching television, David is out getting higher -- five meters higher to be exact.

At first his parents didn't like the idea. David had been spending enormous amounts of time in front of the computer, and his mother worried about his schooling. But sitting in front of the screen had less to do with gaming than coming up with grandiose plans for auntie's garden.

Inspired by a computer game, David drew up plans for a 100-meter long wooden rollercoaster. His father, a carpenter, let him use the workshop to build the meter-long track segments. But Dad was also one of the boy's first critics, making it clear that he thought David would never manage to build the coaster. A first failed attempt made it seem as if father knew best. But David stuck to his plans, and with determination and some help from his little sister, he's now three months into the new project. So far, it looks pretty good -- in test runs, the 69 degree drop can launch a 70 kilogram carriage to speeds up to 47 kilometers an hour. The project should be completed by Spring 2006.

David's only problem now is the law. Local officials from Offenburg, his home town in southwest Germany, have called the coaster a danger and said he has to tear it down. David insists that he has only built it for personal use, but the nanny-ing officials say they know best, and that they only have David's personal safety in mind.

The boy now risks a fine if he doesn't tear the coaster down by the fall. Or maybe not, if he finds a lawyer before then. Unfortunately for him, that could make quite a dint on a 14-year-old's allowance.

British troops in Iraq to get High Tech skivvies

Along with new boots and water filtering backpacks, British troops in Iraq are getting special underwear as part of their new desert kit. Which means no more going commando while on expedition. Iraq being a hot dusty place dust particles get everywhere. On a long patrol this could mean severe discomfort from chafing.

Enter new underwear. According to the Guardian newspaper, the Northern Ireland designed, Chinese manufactured sport trunks have tiny particles of silver woven into the fabric to prevent sweating. The material is made from artificial fibers for comfort and is coated to prevent bacterial infection.

Apparently it's the first time underpants have been included as part of army rations. The boxer briefs are now being doled out as unisex gear, but the army is looking into a women's issue as well.