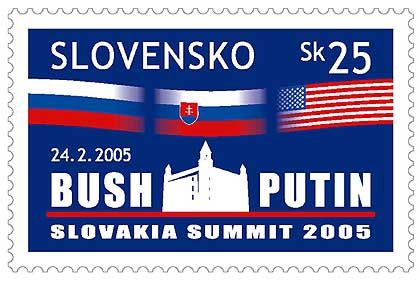 Summits are a time of politics, diplomacy, and, if you're a fairly small Central European state hosting world leaders, they're also a time to sell, sell, sell. While Russian President Vladimir Putin and US President George W. Bush meet in Bratislava to discuss a range of issues, hundreds of souvenirs commemorating the summit will be on sale on the city's streets, ranging from t-shirts and baseball caps to mugs and a special summit postal stamp. The mint has even created a special commemorative coin for the event. It's difficult to imagine the same thing happening in Western Europe, where such meetings are met with much less public enthusiasm (no one was sporting "Bush - Schroeder 2005" sweatshirts in Mainz, for instance). For the young country of Slovakia, though, the event is a rare chance to grab global headlines. The city's officials are hoping the intense media focus on the summit will translate into foreign interest (and investment), and the city's people are enjoying the rare moment of international attention. 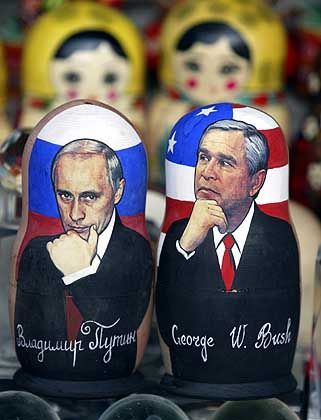 And not to be outdone by Mainz on the security front, which was essentially shut down Wednesday -- including KFC -- during Bush's visit, Bratislava has beefed up its security too, in preparation for Thursday's summit. According to the Slovak Spectator newspaper, Slovak security forces started stepping up their efforts a few weeks ago with intensified border checks. They hoped to stop any persona non-grata from entering the county and starting trouble, or, as the Spectator puts it: "In cooperation with security forces from surrounding countries, the local police have been collecting data and information on people who might disturb the peace during the summit." This translates into almost anyone even slightly critical of the Bush administration -- on Monday, two Greenpeace activists were stopped at the border while trying to enter from Austria, despite having legal permission to travel to the capital.

That's just the beginning. As Bush tours the city Thursday, the airspace over the city has been designated no-fly, and shipping on the Danube River has been restricted. More than 5,000 police are on hand, in addition to 400 firefighters and 400 army soldiers, and MiG jets will be patrolling the skies. About 250 police will be manning water canons during Bush's public address in Bratislava's central square, though no large-scale demonstrations have been planned. Also -- you can never be too careful -- the Slovak Spectator reports that Slovak police have a special chemical laboratory standing by, in case of a chemical weapons attack. (2:32 p.m. CET) 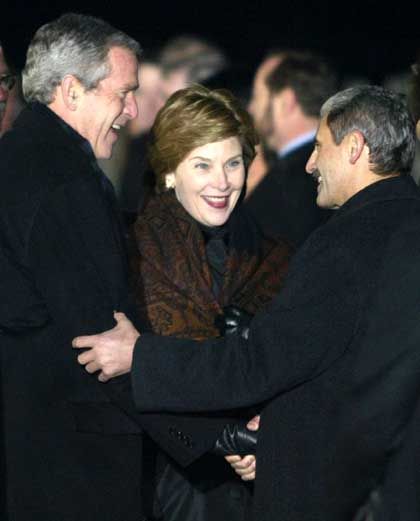 The gloves stay on.

In Central Europe, when they say politicians have to press flesh, they mean it very literally. Custom dictates that you always greet someone with an un-gloved hand, no matter the weather. When US President George W. Bush didn't remove his warm leather gloves while meeting Slovak diplomats upon his arrival in Bratislava on Wednesday night, he created quite a public stir. The protocol malfunction -- while offensive to those who were proffered the leather encased hand -- may not have been nearly as big a deal if it weren't for the fact that the reception was being broadcast live on national television. It's understandable that in temperatures only just above freezing that the president and his wife would want to keep their fingers warm (Laura remained be-gloved, too), but some protocol officer should have warned them in advance. "I don't know whether this is usual in the United States, but it is not in our countries. They may have not been informed about Central European habits," Deana Lutherova, a Slovak protocol expert, told the Czech news agency CTK. Still, on the grand scale of diplomatic faux pas, this hardly rates alongside, say, vomiting on a prime minister and then falling over. Bush Jr. continues to do his daddy proud. (12:09 p.m. CET) 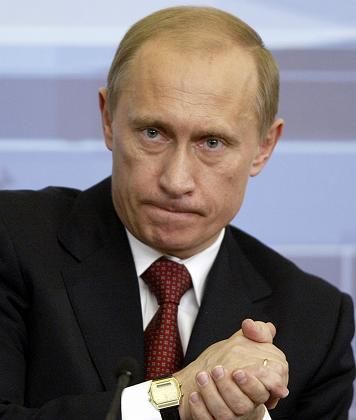 A friend from back in the day: Putin and banker Warnig got to know each other in Cold War Dresden.

Putin's background as a KGB agent is no secret: From the mid-80s until the Berlin Wall came down, he worked in Dresden helping to send spies abroad to steal Western technology and NATO secrets. During that time, according to a report in the Wall Street Journal, he also got to know Matthias Warnig, a man who now heads the Russian branch of Germany's Dresden Bank. Back then, Warnig was working for the East German intelligence service, the Stasi. The allegations could be a black mark on the bank, implying that some of its success in Russia is based on using ties that were forged during the height of Cold War espionage. Warnig has responded by saying that the paper's report is untrue, but a Dresden Bank spokesperson, as well as a former member of the bank's executive committee, told manager-magazin.de, a German business Web site, that Warnig was employed by the agency. According to the WSJ, Warnig helped Putin recruit spies from the West while in Dresden, and the relationship has helped "open doors" for Dresden Bank in Russia since Putin became president. Warnig has also reportedly personally profited from the deals, and has been selected to join the board of directors of Gazprom, the large Russian oil concern. (10:45 a.m. CET)