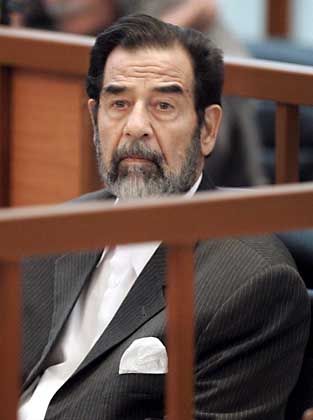 Saddam Hussein on Thursday -- and for the second time this week -- stood up in court to claim he and his fellow prisoners had been tortured by their American jailers. "We were beaten by the Americans. And we were tortured -- every one of us," he had said a day earlier, on Wednesday, after listening to hours of testimony about the killing and torture of Iraqi civilians following an attempt on his life in 1982. US officials denied Saddam had been mistreated. So on Thursday, Saddam repeated the charge, in what looked like a ploy to draw attention from piles of evidence against his murderous regime.

"We don't lie," he said Thursday. "It is the White House that lies." The US, he reminded the court, had invaded Iraq in search of weapons of mass destruction.

Saddam was caught at the end of 2003 on an Iraqi sheep farm, hiding in a hole. During his two years in American custody, he's worked on an image makeover. Now -- often sporting a meticulously tailored suit -- he presents himself in court as a modest and even religious forefather of the new Iraq. During his 24-year secular dictatorship he wasn't known for his devotion to Islam; but now he comes to court every day with a Koran.

"Any harm brought on an Iraqi, my heart breaks," he said Wednesday. "Any harm that fell on those persons (in 1982) is wrong and those who did it should take their punishment. But that happened in a third-world country, as America calls us, 25 years ago. What's happening now?"

This kind of thing might play well on TV, especially with Sunni Arabs, who are frustrated by stories of voter fraud in last week's parliamentary elections and haunted by memories of the Abu Ghraib torture scandal. But the Christian Science Monitor reports that it's not just show business: Saddam's accusations "will most likely need to be answered with an investigation," which could delay a trial that already strikes most Iraqis as painfully slow.

The Dutch parliament has ruled that would-be immigrants will have to pass a language and culture test before setting foot in the country.

Many nations have integration tests, but the Dutch will be the first country to quiz would-be residents before they even leave home. Anyone who passes the Dutch test at one of 140 Dutch embassies and consular offices worldwide can then move to the Netherlands on temporary residency permit. A tougher exam is already in place for immigrants who want Dutch citizenship.

This new legislation, passed late Tuesday, mainly targets people immigrating for marriage -- so called "import brides" -- or those planning to rejoin family members already in the Netherlands. Some 14,000 applicants per year, mainly from Turkey, Morocco and Surinam, are expected to take the new test, at a cost of €350 each.

The exam itself will barely last 45 minutes, but the government guesses that some 250 to 350 hours of preparation may be required. Immigrants will have to know basic Dutch and answer simple questions about Dutch history and democratic principles. Arnold Streibis, press secretary of the ministry of justice, stressed that "anyone, regardless of intelligence or background, will be able to pass".

The Netherlands, like most of Europe, has suffered an identity crisis over Muslim immigration in the last several years, because the descendents of non-European guest workers now have EU passports but don't always integrate, or feel welcome, in mainstream society.

Arnie, Say It Isn't So 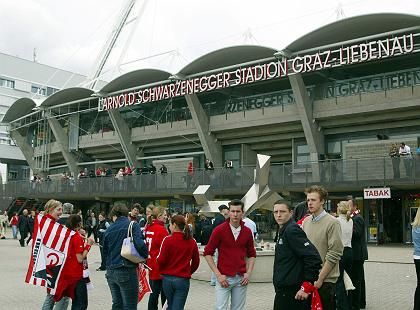 The mayor of Arnold Schwarzenegger's hometown doesn't want to remove the former bodybuilder's name from the local soccer stadium. Schwarzenegger fired a fax to Mayor Siegfried Nagl on Dec. 19, pulling permission to use his name "to advertise or promote the city of Graz in any way" after some Graz politicians protested his refusal to grant clemency to a California death-row inmate, Stanley "Tookie" Williams, who died by lethal injection on Dec. 13.

Schwarzenegger's fax was a pre-emptive strike: Graz City Council had planned to consider removing his name on January 19, as a protest gesture. But Schwarzenegger insisted on having his name eradicated from promotional use in Graz by the end of December.