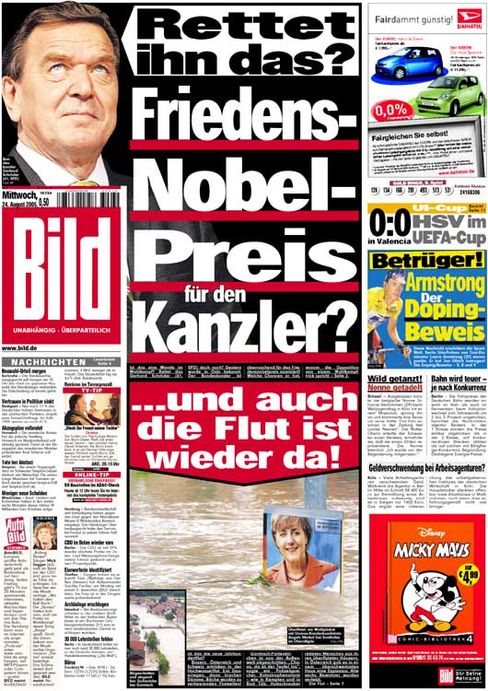 "Will it Save Him? A Nobel Peace Prize for the Chancellor? Plus, the Floods Are Back Again!"

God must really love Gerhard Schröder. He sends the German chancellor one miracle after another. You almost have to ask yourself if the Virgin Mary is going to make an appearance in someone's currywurst in the next few weeks: the Virgin of the Snap Elections.

Back in 2002, Schröder got reelected to office in an election determined by 6,000 votes based on his opposition to the Iraq war and massive floods-of-the-century in Dresden and other parts of eastern Germany. These divine gifts gave him a 12 percent boost in polls.

Then, on Tuesday, the floods came again, with high waters in Bavaria breaking dams and even cutting off Garmisch-Partenkirchen, home to the 1936 Winter Olympics, from the outside world. The floods devastated parts of the southern German state as well as areas of neighboring Switzerland and Austria. "Is this the new flood of the century?" asks the daily tabloid Bild in an article illustrated with a photo of an election poster of Schröder's opponent, conservative Christian Democrat Angela Merkel slowly being consumed by floodwater. The news may have Schröder and politicos drooling, but so far Schröder's showing restraint. He'll keep his rubber boots off until Thursday, when he'll scope out the damage on the sidelines of a planned Bavarian campaign appearance in Augsburg. But don't expect the photo op to deliver any money shots next to that poster: the water is already going down.

Gerd's stroke of luck runs down the full front page of Bild, which gives Schröder its own flood of coverage. The paper brilliantly leads with the fact that Schröder is one of the 199 candidates for this year's Nobel Peace Prize, along with Colin Powell, Sir Bob Geldof and Ukrainian President Viktor Yushchenko. Apparently, the paper says, Schröder has been nominated for his opposition to the Washington-led Iraq war. "By (opposing) it, Schröder made a significant contribution to European peace policies -- and has also proven himself to be the successor to (former German Chancellor) Willy Brandt," SPD foreign policy guru Gernot Erler told the paper. The paper calls his nomination three weeks before the election a "gift from God" a then asks if it's "just a campaign trick," since virtually anyone in the German parliament can forward nominations to the Nobel Committee.

Schröder's playing this like Frank Sinatra crooning his greatest hits on a farewell tour.

But God giveth and God taketh away -- and this time it looks like Schröder's Ark is going to stick in the mud. Even the massive surge of floodwater may not be enough to lift Schröder in polls, where his party is languishing at 29 percent compared to the Christian Democrats' 43 percent.

"Even if it rains until September 18 without a break, it still won't help Schröder," said Christian Democrat Wolfgang Bosbach, offering a slightly more diplomatic twist to the old: Stick a fork in it, it's done.

US TV Evangelist: We Should Kill the Venezuelan President

An American TV evangelist has provoked a major diplomatic row after suggesting the US government should assassinate left-wing Venezuelan President, Hugo Chávez. Religious broadcaster Pat Robertson told 7 million US viewers that Chávez's assassination would be "a whole lot cheaper than starting a war."

The US government has attempted to distance itself from the furore, branding Robertson's remarks "inappropriate." US State Department spokesman, Sean McCormack, insisted, "This is not the policy of the United States government. We do not share his views." 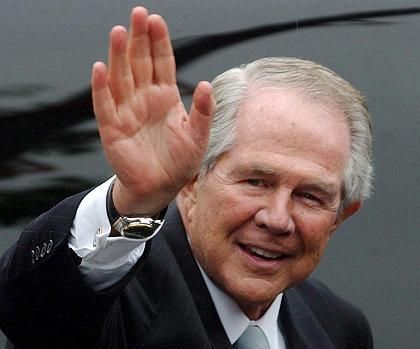 But Venezuela's government has reacted with anger to the preacher's words, precisely because it believes it is US policy to end Chávez's presidency. The White House welcomed an attempted coup against the Venezuelan leader in 2002.

Vice President José Vicente Rangel said, "This is a huge hypocrisy to maintain an antiterrorist line and at the same time have such terrorist statements as these...coming from the same country."

Robertson's comments were aired on August 22 on his own television show, "The 700 Club." The preacher is also the founder of the Christian Coalition, an influential Christian political pressure group.

Robertson told his Bible-bearing audience, "We have the ability to take him [Chávez] out, and I think the time has come that we exercise that ability. We don't need another $200 billion war to get rid of one, you know, strong-arm dictator."

US Secretary of Defense Donald Rumsfeld was quick to rubbish suggestions that Chávez's assassination is official government policy. "Certainly it's against the law. Our department doesn't do that type of thing." Robertson is a "private citizen," the Rumsfeld said, and "private citizens say all kinds of things all the time."

But it seemed to slip Rumsfeld's attention that Robertson is anything but a private citizen. Robertson vocally backed George W. Bush on his television show during the last presidential election, and urged all American Christians to vote for him.

Bush's re-election was largely attributed to this harnessing of the Christian vote. Ninety percent of all white evangelicals voted for Bush in 2004.

Nor is it the first time that Robertson's opinions have got him into political hot water. The evangelist has been accused of all manner of racist, sexist and bigoted views.

Following 9/11, Robertson claimed the attacks were a sign that "God almighty is lifting his protection from us." He has also claimed that the feminist movement "is not about equal rights for women. It is about a socialist, anti-family political movement that encourages women to leave their husbands, kill their children, practice witchcraft, destroy capitalism, and become lesbians."

Robertson uncharacteristically refused to comment on his remarks yesterday, while a host of political and religious groups demanded his show be withdrawn from the US network ABC Family.

A Tangled Tale of a Pasta-based Prophet

Two of Italy's most famous exports traveled last week to spread the word of God. The pope left his palace in the Vatican to be greeted by hundreds of thousands of adoring pilgrims in Cologne. But during his visit the Internet community was also being visited by an incarnate deity, the "Flying Spaghetti Monster", whose popularity is growing by the day.

The "Flying Spaghetti Monster" (FSM) is the creation of physics graduate, Bobby Henderson, who felt compelled to found a satirical religion after the Kansas Board of Education instructed that Intelligent Design should be taught alongside evolution in the state's schools. Intelligent Design denies the veracity of evolution and postulates that nature's complexity predicates the existence of God. US President George W. Bush has endorsed the teaching of this theory.

Henderson, 24, figured that if the board was prepared to allow one un-scientific, faith-based theory to be taught in Kansas schools, then why not two? He promptly established a new fictitious religion, the church of "The Flying Spaghetti Monster", and despatched a letter to the board of education demanding that his religion be given equal time in the school timetable alongside evolution and ID. 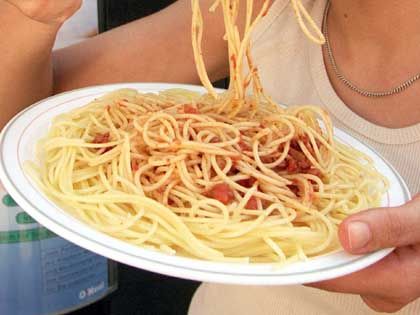 Spaghetti -- Have you felt its healing power?

"We have evidence that a Flying Spaghetti Monster created the universe," he wrote. "None of us, of course, were around to see it, but we have written accounts of it...We tend to be very secretive, as many people claim that our beliefs are not substantiated by observable evidence."

Henderson's letter was accompanied by a doodle of said spaghetti monster -- complete with bug eyes and tentacles - and also a satirical graph showing a correlation between the decline in the number of pirates since 1820, and a corresponding rise in global temperatures.

The new religion has certainly caught the imagination of the online community. Google now records over 70,000 references to the carbohydrate Creator, and Henderson receives over 150 emails from supporters every day.

Among his supporters are a number of members of the Kansas Board of Education who oppose the teaching of ID in the state's schools, and who have written to Henderson to express their gratitude for bringing the issue to light. Board member Janet Waugh wrote, "I think your theory is wonderful and possibly some of the majority members will be willing to support it."

A final decision on whether ID will be taught in Kansas comes in October. Until then, the Flying Spaghetti Monster will continue to spread its glutinous message to pilgrims of pasta everywhere.