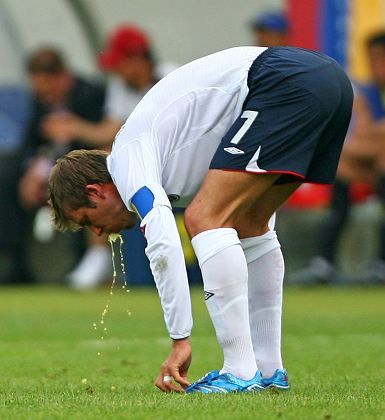 Beckham lets it all hang out against Ecuador.

England fans will be sick to the stomach: Their captain David Beckham is once again the target of mockery and abuse today after a German tabloid decided to get to the bottom of why he threw up during the team's second round match against Ecuador. Beckham, who scored the only goal of the game with a trademark free-kick on 60 minutes, then proceeded to bend double and vomit all over the pitch. Newspaper Bild has decided this bizarre turn of events calls for a special investigation: Why was Beckham sick? Bild has a hunch why Becks lost his lunch

The official explanation is that Beckham was suffering from dehydration. A British Football Association spokesman confirmed Becks had been laid low with "dehydration and heat exhaustion" even before the match kicked off. "I didn't feel well before the game but I thought I would be fine and in the first half I felt fine," Becks told the BBC. "But it (the sickness) continued in the second half and it just came out."

Despite the sweltering heat and oppressive humidity, Bild isn't prepared to accept this pitiful excuse: clearly something far more serious must be up. A reporter was dispatched to the Stuttgart stadium on the trail of Beckham's vomit. Could he find where the England captain puked? Well, sadly no: a storm had washed it all away. But, no matter, the paper has four theories as to why Beckham wretched.

Theory 1 - Was he sick of his team's terrible performance? As captain of the England XI Becks must have been choked by his teammates' lousy play, Bild suggests. Just like before in the group stages, England looked weak against poor opposition. No wonder Beckham turned green.

Theory 2 - Can a metrosexual get pregnant? It's obvious when you think about it: More than half of all women feel sickness during preganancy. Though Becks isn't a woman, he has been labelled "metrosexual" for his gender blurring fashion choices. Ergo, either Becks is pregnant, or Posh has a bun in the oven, and David is suffering sympathy sickness, the paper surmises.

Theory 3 - Was he made sick to the stomach by his wife's astronomical credit card bills? Though both he and wife Victoria aren't short of a dime, Posh's expensive shopping habits may finally have pushed hubby Becks over the edge. The thought of all those €2,000 outfits and €5,500 Hermes bags would be enough to make anyone feel hot under the collar.

Theory 4 - Had Beckham simply drunk too much English beer? Though playing football and drinking beer are of course a bad combination, this isn't why Bild thinks Beckham might have puked: It's the taste of weak English lager ("served without a frothy head!"). That would be enough to make anyone sick

The inaugural Street Football World Cup begins in Berlin on Sunday but it will now go ahead without two African teams after the German Foreign Ministry refused to provide visas for them. Teams of disadvantaged young players from Ghana and Nigeria have been prevented from traveling to Berlin because German authorities believe they pose a substantial risk of absconding.

The decision represents a spectacular shot in the foot for the German government which is sponsor of the Street Football outreach program. The idea was to bring together a host of young football teams from around the world, often from poor or difficult backgrounds, and have them compete in a tournament in the multi-ethnic Kreuzberg district of Berlin from July 2-8. The Street Football World Cup is part of the German government's program of World Cup cultural events, but now the noble aims and sentiments behind the concept have been tarnished by the foreign office's apparently inflexible immigration policy.

Jürgen Griesbeck, the Street Football tournament organizer was astounded by the Foreign Ministry's decision. "The nature of the project is such that the youths involved haven't grown up in privileged environments," he told newspaper Der Tagesspiegel. The German embassy in Lagos rejected visa applications made by the Nigerian street football team "Search and Groom" as it felt there was a high risk the players would not want to return to Nigeria after the tournament. The embassy in Accra refused visas to Ghanaian team "Play Soccer" for similar reasons.

Ironically, the very point of the Street Football tournament is to bring together young soccer players from poor backgrounds who lack social support in their communities as a display of solidarity in the fight against problems of urban violence, drugs, racial hate and AIDS. Two hundred young footballers from around the world, including teams from Rwanda, Afghanistan and Israel/Palestine will take part in the street kick-about in Berlin, cheered on by crowds of supporters starting this weekend. The message from the German government now appears to be: We stand shoulder to shoulder with you, but only so long as you're not really, really poor.

Ulla Jelpke of the Left Party told German newspaper Die Tageszeitung, "That the German government should first invite street kids and then deny their visa applications because the children are poor, reveals how two-faced (Germany's World Cup) official hospitality is." The two teams will not be replaced at short notice, rather the match schedule will be rearranged and music and video clips made by the banned teams will be shown instead. 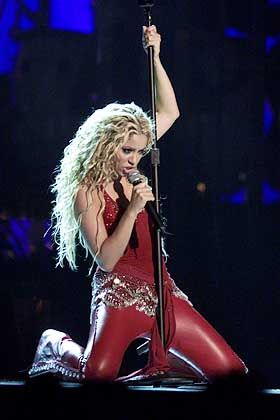 Shakira has been teaching the England team how to shake their hips.

The two teams which make it past the World Cup knock-out stages to the final in Berlin on July 9 will be treated to a performance by hip-swiveling Latin pop goddess Shakira. The singer, together with rapper Wyclef Jean, will perform her official World Cup song "Hips Don't Lie" in front of a sell out 76,000 capacity crowd. Shakira, famous for her skimpy costumes and obscure lyrics, has been asked to get the crowd warmed up before the final kicks off. Not that she's all that clued up about soccer: In an interview with Contact Music, the curvaceous crooner admitted, "I have no idea what a penalty is." But football fans can rest easy. "I want to learn the adoration of football," she added, presumably aware that a mile long queue of men would immediately form, volunteering to teach her about the intricacies of the beautiful game.

The Colombian born singer who once sang the immortal line, "Lucky that my breasts are small and humble, so you don't confuse them with mountains," has recently been touring Germany where apparently she bumped into the England team. On meeting Beckham and Co., Shakira duly gave the team an impromptu lesson in how to shake their booty. It seems Shakira wanted to make sure the team could pull a few moves to celebrate scoring a goal, so she gave them a full blown gyrating demonstration of her belly dancing technique. "I've shown them how to shake their hips like I do," she said. "Maybe they will do it if they win but, then again, maybe they'll be too shy."

Breaking News: Maradona is in the Starting Line-up for Brazil

The Brazilian national anthem is playing and the team lines up to sing with all their hearts. Ronaldo is first in line and next to him young Brazilian star Kaka. Third in the queue is Brazilian playmaker Maradona Wait a minute: Maradona? Brazilian? That's right Diego Armando Maradona, the Argentinian football legend stands proudly in a Brazilian shirt singing "Hino Nacional Brasileiro". Traitor, deserter or renegade? Well, it's not quite as bad as it seems: it's just a commercial. Not that this has stopped Maradona from getting into considerable trouble with the Argentinian press.

Maradona was paid around $350,000 by the manufacturers of a popular Brazilian soft drink to appear in the commercial. He awakes from the dream and shouts "Ay caramba! It was a nightmare!" Several empty cans of the Guarana drink sit next to him on his bedside. He's drunk too much, he's turning Brazilian

So far, so funny? Well yes, so long as you're not Argentinian. Online magazine Sports Illustrated reports the reaction of the Argentinian press to the advert. "Wearing the jersey of Brazil is profanity!" wrote an Argentinian daily paper in its editorial. "How on earth could he stay there, singing their national anthem?" a popular Buenos Aires talkshow asked. "It's more than betrayal, it's the end!"

But, Maradona, now 45 -- who has attained legendary status in his native Argentina -- is clearly trying to make amends. Witness his performance in the stands at each of Argentina's games at the World Cup as he contorts his face, screams and shouts and hides under his seat, unable to watch. Maradona has become the Argentinian team's most famous fan, its surrogate mascot and cheerleader. TV camera crews continually pick him out to gauge his reaction to the latest piece of skillful play, or narrow miss. He jumps and jigs, ducks and dives and generally creates an amusing scene. But it's no surprise, this is Maradona, footballing genius, notorious for scoring with the "Mano de Dios" (Hand of God), now a recovering coke addict who had a heart attack, gastric bypass surgery and his stomach stapled. We expect nothing less than drama, excitement and controversy. And, with this latest stunt, it seems yet again Maradona has outdone himself.