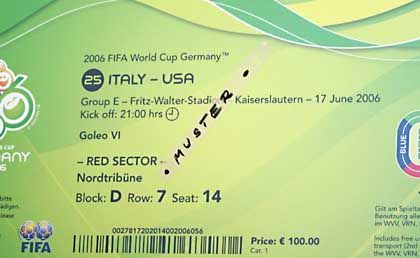 A coup for ticket scalpers: Stadium workers aren't paying as much attention to the individual names on tickets as they said they would.

The long walk from my parked car to the FIFA ticketing center near the Olympia Stadium on the muggiest of Berlin afternoons yesterday gave me plenty of time to think about what a pain in the ass this was going to be.

Not only did we have to pick up my friends' brothers' tickets (the brother being in Brooklyn and unable to attend that night's Sweden-Paraguay game), but we'd have to then get the names on the tickets switched to myself and a friend.

The Stephen King nightmare that is the FIFA World Cup ticketing Web site, with instructions that would make just as much sense if they were written in Sanskrit, might not have told me how to do what I was about to do. But it reassured me that Germany's well-honed bureaucracy would make it as difficult as possible. With less than four hours to go before the 9 p.m. whistle, I didn't have much hope.

And then came Sven; Mild-mannered, blonde, bespectacled Sven, with a yes-I-speak-English pin and the courage to sort a complicated situation. He read through the pieces of paper downloaded from the FIFA web site giving us power to pick up the tickets on the brother's behalf and then set about changing the names. Sure, there were hurdles; like when Sven tried to have me call Brooklyn (six hours behind) and get a Power of Attorney from my still bleary-eyed ticket benefactor. But in the end, even Sven realized the best way was the smooth way: "We don't want to make anyone upset, do we?" Exactly.

Tickets in hand, I walked out and thought only a few seconds about selling them for double to the scrum of yellow-clad Vikings outside the center. The black market has largely defied experts who said the new, teched-out FIFA tickets with their personal digital imprint would make scalping a rarity.

Whether traveling on trains to the US-Czech Republic match, or loitering around the Olympic Stadium last night, I've seen several fistfuls of euro notes exchanged for the treasured pieces of rectangular cardboard. And I haven't heard one story where someone was denied at the entrance because the name on the ticket was different. But I held my breath as I approached the turnstiles anyway.

Two pieces of paper in my pocket, as well as my passport, would assure the ticket-takers that Kerstin Münstermann and Andreas Tzortzis were the rightful, FIFA-approved replacements for David Mashburn and Andrew Sutherland. The woman at the gate grabbed each of our tickets and passed them under a sensor before hustling us through without a second glance. We took our seats, three rows from the field and right behind the Sweden bench. We'd gone from complete outsiders to pitch-side in less than five hours.

Oh, the pains of globalization. Germans took a belated liking to their national flag following the kick-off of the World Cup on June 9. The country has been awash in patriotism for the New Germany. Sales of the red black and gold flag have been so massive that stores and suppliers can't keep up with demand. The problem? Few German flags are actually made in Germany -- the vast majority are cheap imports from China. The shortage of supplies has become especially precarious for the popular small flags that tens of thousands of Germans are waving from their cars. 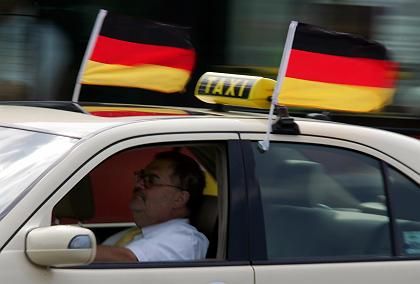 German car flags are not only cheap, they're also in very short supply.

In preparation for the World Cup, the Cologne-based import company Fernost Importe Geiss (FIG) ordered 100,000 of the small polyester German flags, with plastic masts that can be attached to cars. Within just a few days time, all had been sold. Five other flag importers report that they are also unable to meet consumer demand. "Even if there were massive supplies of flags in China," FIG marketing man Calogero Lo Cicero told SPIEGEL, "they would have to be sent by sea in container ships and would first arrive in Germany in four to six weeks, well after the end of the World Cup." So if that demand is so high, why not just throw a few hundred thousand flags on the next Lufthansa Air Cargo jet from Shanghai? "Air freight is just too expensive," he laments.

Here in Germany, few companies are interested in manufacturing flags. And even if they did, few retailers would buy them. Marcel Cornelissen of the Internet discounter Everflag, has no interest in making the switch. With generous benefits, soaring non-wage labor costs and six weeks of mandatory vacation each year, pampered German workers are just too expensive for flag-making. "Depending on the quality and work it entails, a German-made flag would be 10 to 30 times as expensive" as one produced in China. Companies that order in bulk  over 50,000 pieces, can get German flags from China for about 17 cents each. In turn, they are sold in Germany for up to €5.

The shortage is especially vexing because the quality of the existing flags is deeply lacking. The car-mounted flags are cheaply sown and fray quickly when taken for a joy ride in the family Mercedes. They're so cheap, in fact, that they might even be shorter lived than Germany's new-found patriotism. If the odometer hits 100 kilometers per hour, the flags' plastic shafts break just about as fast as you can say the word autobahn. "On the motorway between Cologne and Aachen I've seen tons of them on the side of the road," FIG's Lo Cicero says.

Soccer fans in Berlin are spoiled for choice when deciding where to watch World Cup matches. Sure the best place to be is in the stadium, but for those without tickets and for the matches elsewhere in Germany, there is a seemingly endless number of options.

Almost every bar or café has a big screen TV. In many neighborhoods, there are small gaps between buildings -- caused by extensive bombing during World War II -- that have been turned into small urban parks or courtyards. This summer they're often serving as open-air World Cup parties, with barbeques and giant projection screens showing games. Of course, there's the humongous official fan mile near the Brandenburg Gate, which seems to be regularly attracting a half-million people for top matches. But there are plenty of big-scale alternatives.

During the United States' opening game against the Czech Republic I checked out Popkick, a venue smack in the middle of Berlin's Treptower Park. Like the fan mile, there are concerts and other activities, but the food is considerably better. I still fail to comprehend how an official World Cup party can have only mediocre sausage instead of global cuisine. Plus you can sit down with a beer or an ice cream in the middle of a meadow to watch the game.

Of course, I couldn't relax very much as the Czechs beat the US team with surgical precision 3-0. But watching Tomas Rosicky effectively bury America's chances of advancing wasn't the most annoying part. During the match, there was a gaggle of 13-year-old boys from Northern Ireland there. One of them had a huge and very real tattoo of gothic letters covering his entire forearm. But wondering how a prepubescent teen got ink in Belfast was only half as distracting as his little buddy -- clearly the group clown.

Every time the match action would get going the little smartass would try to put on an American accent and shout "touchdown!" or "field goal!" If the US team had been winning it would have been easy to ignore the chavs in training. But combined with seeing your side go down in flames and it's enough to ruin any American soccer fan's mood. That's why  despite living in the World Cup oyster that is Berlin -- I'll be watching the Italy-US match tonight in the comfort of my own home. Alone.