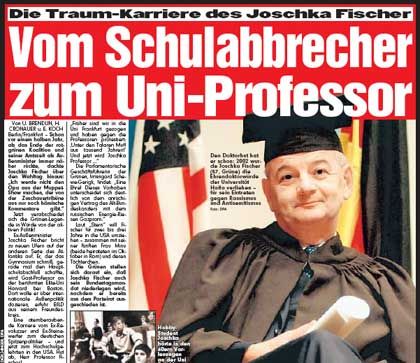 Earlier this year, the German tabloid Bild reported that Fischer was considering a future in the Ivy League.

The Bush administration didn't much like what Joschka Fischer had to say during the Iraq war. So what will Washington say now that the former German foreign minister is trading his parliament seat for a professor's cap at Princeton? This fall, Fischer will teach the next generation of American elites about international crisis diplomacy at the university.

Fischer will begin his new job as a guest professor at the Ivy League institution, SPIEGEL is exclusively reporting this weekend. He has also been given a contract to work as a scholar at the respected Council on Foreign Relations think tank. Fischer is currently a Green Party member of the German parliament, but he hasn't said when he will give up his seat. The 58-year-old, a high school drop out, published a book last year about the post-9/11 world order. And in May, he began writing the " Rebel Realist," a syndicated column published in newspapers around the world. News of Fischer's new post emerged when students at the school found an announcement about the seminar on Princeton's Web site. Last week, the university removed the information.