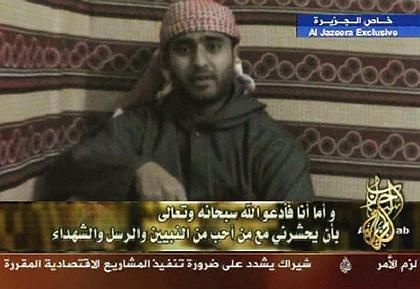 In a message filmed before the London bombings, Mohammad Sidique Khan justifies the killing of 52 people. He blames the attacks on Britain's support for the war in Iraq.

"Until we feel security, you will be our targets," said the 30-year-old Mohammed Sidique Khan in a video message broadcast by the Arab TV station al-Jazeera and shown here by the BBC. "Until you stop the bombing, gassing, imprisonment and torture of my people we will not stop this fight. We are at war and I am a soldier. Now you too will taste the reality of this situation."

Kahn justified the attacks on the British public by saying that they had democratically elected, and therefore support, a government which carries out "atrocities" on his "people." In this way, he said, the British have made themselves fair targets.

Investigators have said that the video will be of limited use in providing more detailed information on the attack. Nevertheless, the message makes for fascinating listening. If nothing else because it is unnerving to hear someone talking about waging war on the Western World in a down-to-earth Yorkshire accent.

Katrina Was a Disaster Waiting to Happen

Scientists have feared the kind of destruction wrought by Hurricane Katrina for years. New Orleans was particularly vulnerable to the catastrophic effects of a storm surge. It was only a matter of time says a precient report written in 2001.

"A major hurricane could swamp New Orleans under 20 feet of water, killing thousands." These sound like the warning words of city authorities last week urging residents to evacuate, don't they? Well, they're not. An incredibly precient report, back in 2001, described the kind of devastation which could engulf New Orleans if it were to be struck by a powerful hurricane. The scenes of carnage predicted in the report are sadly becoming a reality this week. So, naturally, people are starting to ask, why wasn't more done to protect the Gulf Coast and its people?

Hurricane Katrina: Is Looting a Question of Skin Color?

It didn't take long for reports of looting to filter through. No sooner had Hurricane Katrina's winds died down, than people emerged onto the streets and began helping themselves to whatever New Orleans' shopping paradise had to offer.

Now, dear reader, you might say their actions are understandable, if not condonable. If your home had just been washed away, and you hadn't eaten a proper meal for 48 hours, the urge to help yourself to a few candy bars or cartons of milk from the local convenience store might be a strong one. But a number of amazing reports have described how local residents also loaded up their vehicles with DVD players and televisions, with the National Guard and police almost powerless to stop them. New Orleans is rapidly turning into a lawless city, with those unable to leave resorting to plunder and mayhem.

But the really interesting angle on all of this comes from those smart folks at Metafilter. They cleverly link to three pictures of apparent "looters" featured on Yahoo news. Two men are pictured wading through flood waters with bags of groceries and beer in their arms. They are described as "looters." And, coincidentally they are African-American.

Next comes a picture of a white couple carrying food supplies through the flood waters. According to AFP/Ghetty Images, these fine young people are on their way home after "finding bread and soda from a local grocery store." So the white people don't "loot", they "find". A curious insight into prevalent racism in the US media; just as one man's "terrorist" is another man's "freedom fighter," it seems one man's "looter", is another man's "finder". You decide.