Riding the Waves off Cape Horn 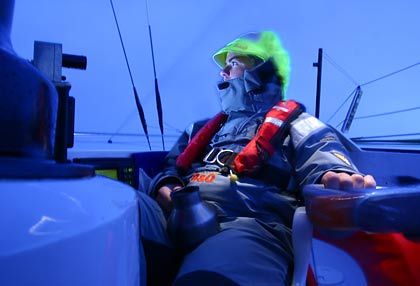 Ellen MacArthur has been battling waves by herself for 45 days. She has at least 25 to go.

We've linked to her before, but in case you've forgotten, Ellen MacArthur is trying to break the record for the fastest ever solo-sailing circumnavigation of the globe. Today, she is in the process of rounding Cape Horn on the southern tip of South America. Known for its heavy seas, the Cape is apparently living up to its reputation. Ellen admitted on Wednesday morning, "I realised these are certainly some of the biggest seas I've been in." Her progressed is being followed by the world media and hourly updates, including video clips, pictures and transcripts of her telephone calls to her shore team can be found on her Web site. So far, she has a five day lead on the current record holder Francis Joyon, but she is now losing time having to tack against heavy headwinds. Just one more ocean to go....

The suffix "-gate", taken originally from the Watergate scandal of the Nixon era, is a favorite of the American media when it comes to scandals. Thus Iran-Contra-gate, Monicagate, and most recently, Memogate. After it turned out that an incriminating memo at the center of a CBS report critical of Bush's service record turned out to be a fake, the public (and the current administration) were out for blood. Now, four people involved in putting together the story are looking for work, and an internal CBS report says the mistake was due to the confluence of pressure and ego, creating a "perfect storm." Some see it as a setback for mainstream American media, while others wonder why anchor Dan Rather -- who has since retired -- wasn't fired, too.

Still haven't made a donation to the victims of the tsunami waves in South Asia? Governments are getting more generous with money for humanitarian relief and the reconstruction effort. So why not donate something specific, something that will directly help people -- like food for a month, or tents and hygiene kits for a handful of families. On the Oxfam Unwrapped site, the humanitarian relief organization marries charity with e-commerce by letting you purchase gifts that save lives. The site offers everything from malaria shielding mosquito nets to 45,000 liter water tanks. The concept is admittedly a little disturbing -- as if the feeling of shopping needs to be recreated in order to get people to be a little more charitable. But we doubt the people of Banda Aceh will mind.