Earlier this month, amateur fisherman Haruo Kanbe stared out at sea in horror -- a monster fish was swimming directly towards him. At first glance the creature snaking through the water looked like a giant eel. The cloudy eyes were especially striking. Triangular teeth flashed inside its open maw.

Thirty-two-year-old Awashima employee Mitsuru Sato arrived with a colleague in tow within a few minutes. Together, they removed the five-foot monster from the water. The biologists realized immediately that what they had fished out of the water was a sensation. A frilled shark (Chlamydoselachus anguineus) had found its way into the coastal waters of Suruga Bay, on Japan's main island of Honshu.

Normally, the prehistoric creatures dwell between 600 and 1,200 meters (between 1,969 and 3,937 feet) below the ocean surface. Until now, few people have had the opportunity to come face to face with a living specimen.

The frilled shark has hardly changed for 95 million years. That's why it's considered a "living fossil." Unlike other types of shark that evolved later, the frilled shark has six gills on each side instead of five. The first pair of gills is coadunate with the underside of the neck; the protruding tissue gives the shark its name. One of the creature's most striking features is that both its upper and its lower jaw are equipped with fork-like, equi-sized teeth.

The creature from the depths is one of the rarest fish in the world. Specimens occasionally show up in the Pacific, Indian and Atlantic oceans. They feature on the Red List of Threatened Species compiled annually by the International Union for Conservation of Nature and Natural Resources (IUCN).

"We regularly receive visitors from the deep sea, as there is a deep canyon in front of Suruga Bay," Sato explains. But they've only encountered a frilled shark once before -- as a cadaver caught in a fishing net.

The prehistoric shark discovered was already in bad shape when it was discovered on Jan. 21. "The animal was very weak or ill," Sato reports. The reduced water pressure, bright light and low oxygen content of the coastal waters put the deep sea dweller in distress. 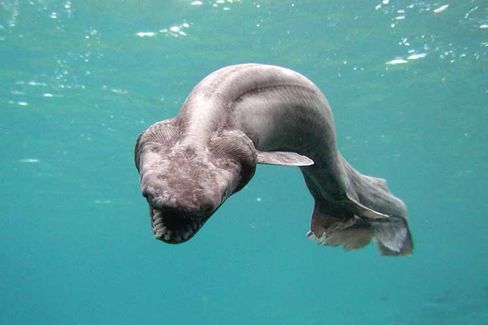 Water pressure is extremely high in the frilled shark's normal marine habitat. The temperature there is about three degrees Centigrade (37.4 degrees Fahrenheit), and it's extremely dark. With its cat-like eyes, which have built-in light intensifiers, the shark can nonetheless see perfectly in the depths of the sea. The prehistoric shark uses fluorescent deep-sea creatures, smells and magnetic currents to find its way. Swimming in shallow waters is not much different for it than being stranded on land: The shark is blinded, feels too hot and can't get enough oxygen.

Indeed, there wasn't much the Japanese scientists could do to save the creature. They used two nets to take the 7.5 kilogram (16.5 pound) female to Awashima Marine Park. The fish spent two hours swimming back and forth in a basin, its back arched. Then it died.

But the marine park employees did succeed in filming the living fossil. "These images are of incalculable value," the researchers noted in their blog.

The video shows the frilled shark swimming through the water with its mouth open. "Perhaps he does the same in the deep sea, as cuttlefish and teleost fish swim directly into its mouth that way," 33-year-old certified biologist Heike Zidowitz of DEG, a German organization that conducts research into sharks, speculates. She learned about the discovery from an acquaintance, an American scientist: "He sent me a jubilant e-mail."

Other shark experts are enthusiastic too. Harald Bänsch, a 40-year-old member of the Shark Project (an species protection organization), says he was "very surprised to see these images." The marine biologist laments the fact that very little research has been done on the species. "We still don't know how old they live to be and how they mate. We don't even know many of them exist." All that is known is that their pregnancy lasts about two years and that frilled sharks have between eight and 12 offspring, which are born alive: They hatch from their eggs while still inside their mother's womb.

"The animals have adapted well to their ecological niche," says Swiss scientist Alexander Godknecht, the president of the Shark Foundation, another animal protection organization. Because the shark's deep-sea habitate has changed so little over the millions of years, "the shark didn't have to adapt very much."

Exactly how the female shark made its way to the dangerous shallow waters remains a mystery for experts. The Japanese scientists suspect the shark was already weak -- and then got sucked into an eddy and didn't have the strength to swim back to its home.