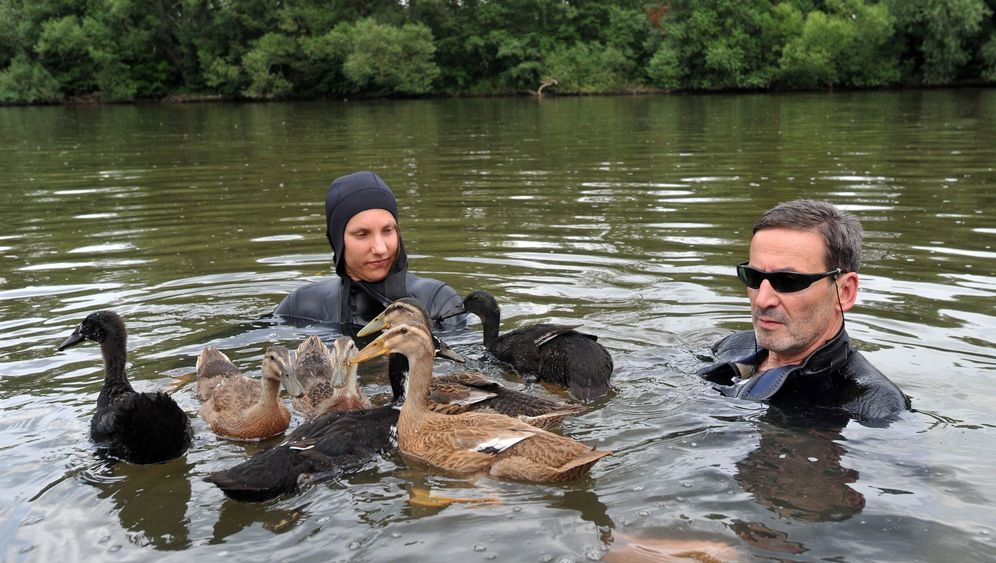 The ways Germans spend their summer holidays are too numerous to count, although they usually involve the consumption of copious amounts of fuel -- for the jet or the car. Some flock to the Baltic Sea, while others get stuck in massive traffic jams in Bavaria as they make their way down to the Alps or the shores of the Mediterranean. One couple in the western German city of Kassel have found a novel way to while away their time. They set off this week to swim with their pet ducks from Kassel to the port city of Bremerhaven on the North Sea.

Pia Marie Witt and Wilfried Arnold, who are business partners and run a hot air balloon business, got the idea after 58-year-old Arnold, a former rivers specialist for the German army, went for a swim in the local stream. He came back so inspired that he decided to swim from the center of the country to the ocean.

Ducks in a Dinghy

The next time Arnold dove into the Fulda River, Witt took the plunge, too. "When I went with him the next time, a swan suddenly began swimming along with us," Witt recalls. "That was a really moving experience." The pair then began planning the 485 kilometer (about 300 miles) journey to Bremerhaven. Only this time, instead of relying on chance encounters, Witt and Arnold decided to bring a few pets along -- a paddling of Indian Runner ducks the pair had handraised and trained for the arduous journey.

Witt, who describes herself as a "pet person," dove head first in to duck research to find the perfect traveling companions. She finally settled on the Indian Runners "because they can easily be kept in our yard after the trip," she says.

Witt and Arnold say it will take about six weeks to complete the trip. Most of the swimming will be done by the pair themselves. They plan to swim approximately 10 to 15 kilometers per day, but the ducks will spend much of that time in a small inflatable dinghy. The pair took pains to note that the birds would not be pushed to their limits in the water. If animal rights activists want to complain about othe trip, Witt says, "they should go to a poultry market and see how the ducks are treated there and then compare them to ours."

The two hot air ballon pilots don't want their project to be seen as a mere publicity stunt. They teamed up with the environmental group Nature and Biodiversity Conservation Union (NABU) and are swimming for a good cause. They are seeking to raise money for use in river conservation projects. Witt and Arnold will also be sharing highlights from their journey and, one can hope, plenty of anatine antics on their special " Duck Express" website (in German, but with lots of photos in the section titled "Galerie," with snapshots from the ducks' births right up to their first swims with Witt).