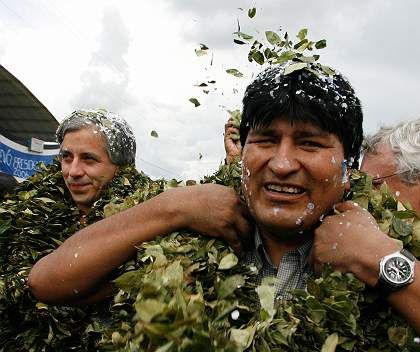 The wine, a bit on the sweet side, is supposedly a remedy against Parkinson's disease and impotence and, according to the label, it is especially suitable for "athletes and singers." In small doses, that is, because the wine is pressed from coca leaves, enhancing the effect of the alcohol. If you get drunk, you don't have to worry about how you're going to feel the next day because "coca wine doesn't cause a hangover," says Melby Paz.

Paz, a businesswoman from Bolivia's coca production center, Cochabamba, bottles a few hundred liters of her coca wine each month. The ink-colored beverage is the top-selling product for her company, Coincoca. She also sells soap, shampoo, toothpaste and cookies made with coca, and she has plans to develop instant soups and muesli in the future. Indeed, Paz is serious when she says "coca is an incredibly valuable food and medicine."

Once people disparaged Paz as "La Loca de la Coca," or "the crazy coca woman." For years, she has been developing coca-based products, which she sells in her shop in downtown Cochabamba. Business was mediocre until a South American Indian and representative of coca farmers -- Evo Morales -- was elected president. Now Bolivia's new president plans to use government aid to promote the sale of coca products.

"Coca sí, Cocaína no" -- yes to coca, no to cocaine -- was one of Morales' campaign slogans. The goal of his new program is to disassociate the plant that provides the substance used to make cocaine from the drug stigma. In the Andes, the coca plant has been used as a medicine for thousands of years, and the wonder plant was even farmed by the Incas. Millions of poor Bolivians chew the leaves because they dull the sensation of hunger and make backbreaking labor more bearable. Bolivian officials are even considering adding coca to school meals.

Morales plans to build a state-owned coca factory, a venture in which Paz is his biggest ally. She has been hired to conduct a study on industrial-scale coca production. Her company processes 350 kilograms of the plant each month, but, as she complains, "it could be more if the leaves weren't so expensive." Until Morales took office in late January, the army systematically destroyed coca plantations, making coca, a staple food for Bolivians, scarcer and more costly.

Now that the new president has put a stop to the destruction of plantations, coca farmers are hoping for a new boom. Experts believe that the 3,200 hectares (7,907 acres) of legal coca plantations in the Chapare region -- a major coca farming area at the base of the Andes -- could triple under the new policy. But they also fear that the drug mafia will be the biggest beneficiary of the official about-face. "Bolivia will flood neighboring countries with cocaine," warns the newspaper Los Tiempos.

Military experts in Washington are already predicting a nightmarish scenario, the emergence of a socialist "narco-state" under populist farming leader Morales. They believe that Morales, with the help of his friends, Venezuelan President Hugo Chávez and Cuban dictator Fidel Castro, could destabilize the entire Andes region.

Ironically, Washington itself is partly responsible for the rise of the man once vilified as a "narco terrorist." In the 1990s, when the Andean country had become one of Latin America's biggest coca producers, the Americans experimented with a new approach to the drug war in Chapare, promising the government generous development aid in return for its agreement to eradicate the coca plantations. The aid was intended to encourage the farming of alternative products, such as pineapples, bananas, coffee and oranges. Washington was so pleased with the program that it held up its alliance with La Paz as a global model.

Since then, American and European aid organizations have injected about $700 million in development aid into Chapare. But the development projects failed when it became apparent that the region's remoteness makes shipping pineapples and bananas too expensive, and that prices for the crops can't compete with coca. The drug war brought nothing but violence and poverty to farmers in the region, fueling animosity toward the gringos -- US drug enforcement and military experts who consult with Bolivian security forces on eradicating the coca plantations. Indeed, government forces even used torture in their campaigns against coca farmers, with dozens of the campesinos disappearing without a trace. This brutal treatment almost triggered a revolt in Chapare, where the resistance movement against the government was led by a cunning union organizer: Evo Morales.

Morales had hardly been inaugurated before he had himself reappointed chairman of the powerful umbrella organization of coca farmers, a conflict of interest the president apparently feels is no cause for concern. "I will continue to be your leader," he innocently announced, "so that I don't lose touch with the people." It was as if the president were the godfather of the poor.

Each coca farmer is allotted one cato, or about 1,600 square meters (a little under half an acre), to plant coca. The military no longer destroys excess coca shrubs, because "we ourselves make sure that no one exceeds the quota," explains union leader Asterio Romero. Experts, however, doubt that fighting a drug war on the basis of voluntary self-monitoring can work. Washington is already threatening to cut financial aid to Bolivia.

Morales' predecessors were consistently unsuccessful in their attempts to regulate the coca trade. The government agency that issues shipping licenses for "legal" coca, for example, is considered corrupt. Only a fraction of the Chapare harvest makes it to the state-run coca market in Cochabamba, says development expert Oscar Coca, who calls Chapare a "Bermuda triangle." Police-confiscated coca leaves, which are supposed to be burned, are often resold to the drug mafia.

Meanwhile, the drug trade continues to boom. Since the beginning of the year, the drug police have discovered 339 cocaine laboratories in Chapare and confiscated 250 kilograms of illicit drugs. "The couriers hardly even resist when they're arrested," says police chief René Salazar. "They know that in most cases they'll quickly be released." The courts are slow in prosecuting cases, and drug smuggling is treated as a minor offence.

Couriers are willing to transport the coca -- by bus, bicycle or taxi -- for a handful of dollars. The work is far more lucrative than farming fruit or coffee. Signs of the failed development policies are everywhere: dilapidated structures originally intended as vegetable markets and funded by the European Union, or highly subsidized pineapple plantations where the fruit often rots in the fields because farmers are unable to find buyers.

Foreign aid workers, many of whom earned princely salaries, elicited nothing but envy and rage among the farmers. "The gringos gorged themselves with the aid money," complains coca farmer Juana Quispe, "but we never got it." Quispe, a living legend in Bolivia, often joined Evo Morales during demonstrations and road blockades to protest raids by the drug police. She and Morales have been friends for the past 14 years.

Soldiers stormed Quispe's hut in the small town of Chimoré two years ago. They tore up coca bushes in her garden, stole chickens and oranges and molested Quispe's daughter. A fellow activist, union leader Feliciano Mamani, was tortured at the Chimoré military base for allegedly stirring up anti-military sentiment among the farmers. During a demonstration four years earlier, Mamani was shot at and his shinbone was shattered. He claims that "American drug enforcement agents" led the attacks.

Now the former victims of persecution are in power in Bolivia. Quispe represents the socialist governing party, MAS, in the Bolivian congress. Mamani was elected mayor of Villa Tunari, a city in Chapare. The foreign aid workers have been driven out, and local municipalities are now administering the foreign aid money. As a next step, former activists Mamani and Quispe want to see the American drug enforcement agents pull out. 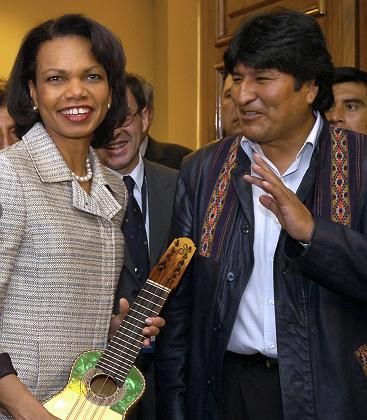 But it's a radical step that even President Morales isn't quite willing to take. As president of a poor Andean country dependent on foreign aid, Morales would be unlikely to survive a confrontation with the powerful Americans. To avoid alienating the US, Morales has publicly vowed to respect all international agreements over battling the drug trade. He has even demonstratively attempted to convince US Secretary of State Condoleezza Rice of his peaceful plans for the coca plant. At a meeting in the Chilean city of Valparaiso, Morales gave Rice a guitar decorated with coca leaves.

So far, his strategy seems to be working. More than 70 percent of Bolivians stand behind their new president. In early March, the congress gave its blessing to Morales's most important political project, a new constitution. An influential group of business leaders in the country's Santa Cruz province, a group that had bitterly opposed Morales during the election campaign, is now assiduously courting the popular hero.

His campaign against corruption has been especially popular among the ordinary people. Morales cut his presidential salary in half and managed to push through a reduction in lawmakers' salaries. Several high-ranking officials Morales accused of corruptibility were fired.

These days, life in Bolivia's presidential palace resembles life in a commune. The president, his vice president and several ministers all live in the building, and cabinet meetings often begin as early as 5 a.m. Although Morales has several children, he is unmarried, and his sister usually accompanies him at official events.

Coca entrepreneur Melby Paz has also capitalized on the new president's popularity, displaying an oversized photograph of Morales in her shop in Cochabamba. Apparently it works. "Ever since Evo has been in office," she says, "my sales of coca products have doubled."