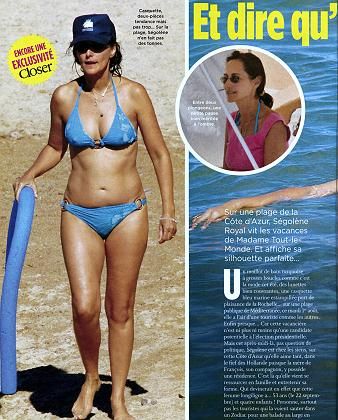 Marc Dolisi sits at his desk, triumphantly holding up a cover image depicting a woman in a turquoise bikini. "This is our best-selling cover in three years," he says. Dolisi, the deputy editor of French tabloid VSD, is beaming.

The woman on the cover is Ségolène Royal. She is 53 -- though she doesn't look it in the photo -- a socialist and a mother of four, and she wants to be France's first female president. She is clearly doing whatever she can to further that aim. Holding a blue pool noodle in her slender hands, Royal could almost pass for Demi Moore at the beach.

The photo also shows a short man wearing black swimming trunks and carrying an i-Pod jogging on the beach. The man's name is Nicolas Sarkozy, and he too wants to be president. He looks like Popeye. The caption reads, in red letters, "Duel au soleil," or Duel in the Sun.

Dolisi, 48, had a "gut feeling" that he was doing the right thing by featuring the vacation shots on the same cover image, because, as he says, "Ségolène" and "Sarko" have long since acquired the populist image that qualifies them to be what the French call "people."

They are two ambitious politicians who have slyly introduced the tricks of show business into their trade, making glamor a political statement and using their private lives to enhance their public standing. They act as though being human qualifies them for the presidency. And by doing so, they have violated a French taboo.

There were plenty of good reasons to buy the unauthorized paparazzi photos of Royal, even if it meant risking a lawsuit. "Until recently," says Dolisi, who spent six years working for the popular, glossy weekly magazine Paris Match, "we had this well-known line in France that no one dared cross. Royal and Sarkozy have simply eliminated it."

In this election, France is being exposed to the sort of political campaign that was popularized in Germany by former Chancellor Gerhard Schröder and in Great Britain by Prime Minister Tony Blair: the triumphal march of the politicization of personal lives.

Sarkozy and Royal have long been exceedingly generous in opening up their private lives to the public. The French are intimately familiar with the way Royal handled childbirth (not too long after giving birth, she allowed reporters to photograph her in bed with her baby, her work papers at her side), the principles that govern her marriage ("we are two free people"), her recipe for battling cellulite (water aerobics) and her favorite clothing store (Paule Ka in chic Saint-Germain-des-Prés).

When it comes to Sarkozy, the French know that his wife sends him to bed early (preferably by 10 p.m.), that his food of choice while traveling is fruit yoghurt (Jockey is his favorite brand), and how he consoled himself with a young brunette journalist from Figaro after learning that his wife had had an affair with another man for several months.

The French are unaccustomed to this sort of exhibitionism. For decades, it was an unspoken rule that the press had no business delving into the private lives of politicians, even when it came to the many extramarital affairs of French presidents. Everyone knew that former President Valéry Giscard d'Estaing had various paramours, but no one wrote about it.

No one paid attention

Everyone in Paris knew that in the night of Princess Diana's death, President Jacques Chirac couldn't be reached at the Elysée Palace because he was spending the night with his mistress. But no one paid much attention.

In 1994, when it became known that former President François Mitterrand had been leading a double life for two decades and was supporting a second family, there was no public outcry. On the contrary, his countrymen accepted the existence of Mitterand's illegitimate daughter Mazarine, born in 1974, with a mixture of sympathy and tolerance. Not even the curious fact that Mazarine and her mother, Anne Pingeot, lived in a luxurious Paris apartment at government expense and were given round-the-clock security ruffled any Parisian feathers.

Mitterand's affair was common knowledge in Paris newsrooms, as was the existence of the illegitimate child. But no one wrote about it. "In retrospect, it was a mistake," says Hervé Martin of the normally audacious satirical publication Canard enchaîné, "because Mitterand was devoting significant government resources to his daughter. We should have written about it, but we didn't even discuss it."

There was even a department at the Elysée Palace that reported to the defense ministry and was charged with preserving the secret of the president's illegitimate child. Mitterand himself was aware that hundreds of telephone calls were tapped for this purpose, including the conversations of many a journalist -- a scandal for which 12 government officials had to answer for before court 20 years later.

The French are traditionally fond of leaders who up their macho factor while in office. "After all," says Dolisi, "a president is also just a man." The Bill Clinton and Monica Lewinsky affair would never have turned into a national scandal in France -- and the French have always been a bit proud of that. 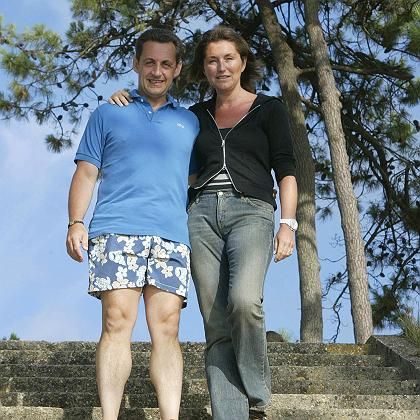 French Interior Minister Nicolas Sarkozy with his wife Cécilia. The two had a very public break-up -- and reconciliation.

But now, everything seems to have flip-flopped in France, and yesterday's rules no longer apply. As the "Sarko show" competes with "Royal mania," a new trend has entered politics: "peoplization."

One of the first milestones in this new development happened on May 26, 2005, when Interior Minister Nicolas Sarkozy confessed, on the French evening news, to having serious marital difficulties. "Just as in millions of other families," he told the French public, "we are currently having difficulties in mine."

Four days earlier, his wife Cécilia had informed him that there was another man in her life, advertising executive Richard Attias. Sarkozy decided to share his troubles with millions of French television viewers. He wanted to show them that although he was unhappy, he was able to keep his composure, and that he was a man who knew what it meant to suffer.

Three months later, on August 25, Paris Match ventured across the invisible line into Sarkozy's private life when it featured a photo of his wife with her new lover in New York -- on the cover page, no less. It was the magazine's best-selling issue since the death of Pope John Paul II. "Sarko" had initially decided to violate the taboo when he realized that doing so could boost his political prospects. But this time he was less amused.

In the late summer of 2005, paparazzis, professional and amateur, documented Sarkozy's love life. When he was seen shopping for household devices in an electronics store, a young female journalist on his arm, the customers in the store quickly snapped pictures of the politician and the woman with their mobile phone cameras, something they would normally do only for major celebrities, such as actor Gérard Depardieu.

Cécilia officially returned to Nicolas in June of this year, sparking newspaper headlines ranging from "A Triumph of Love" to "Summer of Forgiveness." From then on, the presidential candidate and his wife were photographed alternately traipsing around in rubber boots or paddling through French Guyana in a dugout canoe. Indeed, Sarkozy even extended personal invitations to journalists to capture his rekindled marital bliss.

At the same time, the senior editor who had been responsible for the cover photo of Sarkozy's wife and her lover had to clear his desk at Paris Match after Sarkozy apparently asked the magazine's owner, Arnaud Lagardère, one of France's biggest media and defense industry barons, to fire the man. Sarkozy and Lagardère are friends. Politics, business and the media are even more intricately intertwined in France than in other countries, forming a network of dependency and favoritism. "It occasionally happens that people do favors for each other," wrote Canard enchaîné, which rarely treats the governing classes with kid gloves. A few months ago, for example, the satirical publication offered its readers an enticing account of a night Foreign Minister Philippe Douste-Blazy spent in a hotel in Morocco.

Douste-Blazy and his female companion were on vacation and were staying in a room on the fourth floor of "La Mamounia," a luxury hotel in Marrakech -- not that there was anything especially titillating about this. But at some point the couple launched into a heated argument and promptly destroyed much of the furniture in their suite. The damage, wrote the paper, was upwards of €30,000. The Moroccan government promptly compensated the hotel, but Douste-Blazy, after quickly getting out of Morocco, naturally denied the incident.

"We had clear proof," says Hervé Martin of Canard enchaîné, "and that's why we published the story. Perhaps we wouldn't have done so in the past."

In this new, more personalized atmosphere, the French presidential election campaign promises to deliver a certain measure of entertainment value. "We will undoubtedly discover everything," says a gleeful Marc Dolisi. "We will learn whether Cécilia and Sarkozy are really in love or whether she returned for strategic reasons. And we'll learn whether Ségolène Royal and François Hollande are a real couple, or whether they live together merely to preserve a façade."

The politicization of the private sphere has its potential pitfalls. For example, if the media's portrayal of one or both candidates' supposedly happy family lives turns out to be nothing but a farce, voters will not react kindly. And it wouldn't be because the French found the occasional extramarital tryst morally problematic. It would be because the French, just like anyone else in Europe, don't like to be taken for a ride.