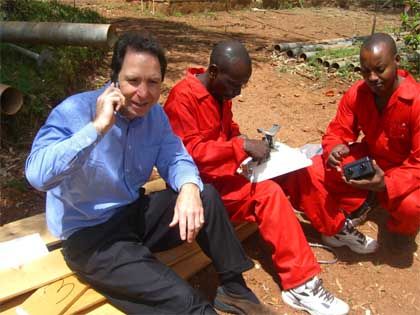 Greg Wyler at the office in Rwanda.

An SUV struggles up the steep serpentine curves of a bumpy road, dodging potholes as it passes banana groves interspersed with dilapidated huts. Barefoot children carry canisters of what passes for drinking water on their heads. The water comes from muddy puddles.

"Africa offers many investment opportunities," says an enthusiastic Greg Wyler, a boyish-looking man in his mid-thirties. "We simply have to bring the Internet into each of these huts, and the rest will fall into place." Wyler, an American entrepreneur, hopes to launch an "African Renaissance" with his project. His recipe for success is simple enough: free software, high-speed fiber-optic networks and unrestricted entrepreneurship.

The back seat of the weaving SUV is Wyler's temporary office. He sits there with a mobile phone in one hand and a notebook computer on his lap. He surfs the web as the vehicle weaves through slums on the outskirts of the Rwandan capital Kigali.

Wyler owes his ability to go online using a wireless card to one person: himself. A few months ago he launched one of the world's most state-of-the-art wireless networks in Rwanda, one of Africa's poorest countries. The network allows anyone with a wireless connection to log on to the Internet at any time. Wyler has also installed fiberoptic cables linking about 50 schools, a handful of hospitals and university institutes in the country. Using the new technology, village doctors can obtain advice on perplexing medical questions from experts at Harvard University, school principals can exchange lesson plans and textbook manuscripts and a vocational school in the small city of Gitarama can teach its students the skills needed to offer a much-needed service to European engineering firms: converting old, two-dimensional diagrams into 3-D models -- at prices well below the Indian competition.

With his company, Terracom, Wyler hopes to transform an entire country into a sort of open-air laboratory for a novel form of development aid. His idea is to use computer networks to empower more than eight million Rwandans to free themselves of poverty. It's a daring proposition, the idea that a society in which more than 90 percent of the population consists of families farming small plots of land can leapfrog into a knowledge-based society -- and that in only a few years' time.

Wyler wants to turn Rwanda into a regional internet hub. One element of his strategy involves a local factory which will assemble inexpensive South Korean mobile phones starting in 2007; they will retail for $30 apiece. And in January, Nicholas Negroponte, the legendary co-founder of the Media Lab at the Massachusetts Institute of Technology (MIT) near Boston, is expected to visit Rwanda in connection with his latest project, called "One Laptop per Child," which would provide inexpensive laptops to millions of children in developing countries. Some local patriots already dream of Rwanda becoming an "African Silicon Valley."

Skeptics think it's the height of cynicism to provide computers to children who have neither enough food nor access to clean drinking water. But Wyler sees the Internet as a necessary infrastructure, on the order of roads and power lines. Calestous Juma, a professor of international development at Harvard University, agrees: "Should Rwanda hold off on becoming computerized until all of its other problems have been solved? Some countries simply cannot afford the luxury of calmly taking one step at a time."

Wyler, for his part, is determined to prove to the rest of the world that everyone will benefit from the Terracom project. He jumps from the vehicle, mobile phone to his ear, and stands in front of a 50-meter (164-foot) transmission pole. Using ropes, technicians in red Terracom overalls are hoisting a giant directional antenna into place.

The men report a few problems, but Wyler insists that they will have to fix them alone. "It would be easy to fly in a few well-paid specialists from South Africa to build the network," he explains, "but if we want this to work in the long run, the Rwandans will have to do it themselves." All but three of his employees are Rwandan.

Motivated by a murder

Only three years ago, Wyler hardly could have found Rwanda on a map. The child of middle-class parents, he studied computer science at MIT. While still a student, he founded a company that produced sound damping equipment for computers. In his late twenties Wyler sold the company for $15 million and purchased an estate near Boston, where he could have retired with his wife and child. But everything changed for Wyler on one horrible night in October, four years ago, when he found his mother murdered in her apartment. He was convinced that the murderer was a member of his mother's immediate family, but he had no proof to support his suspicion. The crime has remained unsolved to this day. 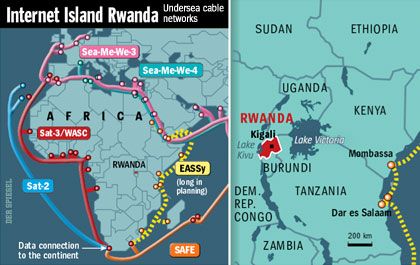 Rwanda is "essentially an Internet island," with the only robust satellite uplinks in Africa's interior. The next step is to lay fiber-optic cable.

The death of his mother was devastating to Wyler, who desperately began searching for some new meaning to his life. He found what he was looking for at a friend's wedding, in a chance conversation with a government official from Rwanda. The man complained to Wyler about the prohibitive cost of Internet access in his country, for which a state-owned monopoly called Rwandatel was charging about $1,000 a month. Wyler had suddenly found the challenge he needed. He raised capital from investors and simply acquired Rwandatel. He fired half of its employees, installed state-of-the-art technology and lowered the cost of Internet access to a small fraction of what it was under Rwandatel.

The move triggered an avalanche. Practically overnight, what had been a tiny group of 22 Internet users with broadband access turned into thousands. Almost a third of a million Rwandans now have mobile phone service, provided either by Terracom or its competitor, MTN.

Wyler's four-wheel-drive office is now cruising through downtown Kigali, where roadside vendors sell sweets, old shoes and prepaid telephone cards. Rattling motorcycle taxis weave their way through heavy traffic. Construction cranes tower over new office complexes, parking garages and shopping centers. After all but collapsing in the wake of the 1994 genocide, the Rwandan economy has now recovered to pre-genocide levels.

Terracom has installed large satellite dishes on the outskirts of Kigali. The dishes, he says, are currently a bottleneck for the wireless flow of data in Rwanda, which still lacks a high-speed fiberoptic cable line to neighboring countries. While northern, western and southern Africa are served by underwater fiberoptic cables, similar access is nonexistent for large swathes of the eastern part of the continent. Rwanda is essentially an Internet island, with Terracom linked to the World Wide Web through one central satellite connection. This makes connecting to the Internet slower and more expensive than it could be.

"Countries like Germany had more than a century to develop what we must create ten times as quickly," says Romain Murenzi, Rwanda's Minister of Education, Science, Technology and Scientific Research. "We have almost no natural resources and no seaports in Rwanda, which leaves us only with the knowledge-based society."

Like many Rwandan politicians, Murenzi takes his laptop with him wherever he goes. It's a symbol of power and modernity. "Rwanda is like a vacuum," he explains. "If you stimulate it, it can produce an astonishing amount of energy." Murenzi holds a doctorate in physics from a Belgian university.

The requisite flattering portrait of President Paul Kagame hangs on the wall in Murenzi's office. Many foreign observers hold a critical view of Kagame, the former military leader of the Tutsi rebels who, together with his army, put an end to the 1994 genocide. He is seen as a dictator of sorts, barring any political opposition, exploiting the mineral resources of neighboring Congo and maintaining an excessively large army. 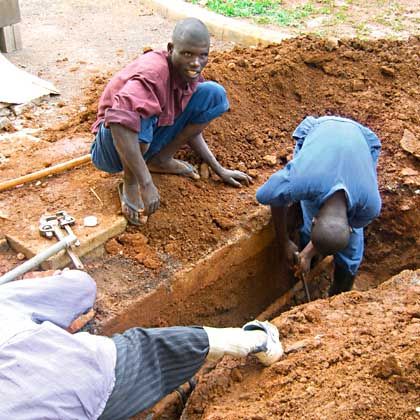 Rwanda's fiber-optic network needs to be buried by hand.

But even his critics agree that Kagame can be credited with stabilizing the country. He has also taken steps to stimulate the economy, mindful that unless he can create jobs his overpopulated country of eight million could descend into yet another wave of unrest. To further his goals, Kagame's cabinet is pursuing a master plan dubbed Vision 2020. "We intend to quadruple the average income by then, and communication networks can help us achieve that goal," says Murenzi, the science and technology minister.

The government already turns a profit from the wireless industry, says Murenzi, adding slyly: "Rwanda has a huge shadow economy for which no taxes are paid. But the state automatically earns 18 percent in value-added tax for each telephone call." Another advantage of the advent of mobile communication, according to Murenzi, is that "if people spend more time on the phone, they have less money left over to get drunk at night. This relieves pressures on the healthcare system."

Wyler is now sitting at the pool in the Hotel Mille Collines, made famous in the film "Hotel Rwanda." During the 1994 genocide, members of the Tutsi minority and their supporters sought refuge here from murderous Hutu bands, using the swimming pool as a source of drinking water. Wyler seems exhausted, finally feeling the effects of yesterday's late-night dinner with a group of cabinet ministers. For lunch, he drinks a Fanta.

His idealism constantly runs up against reality. The education minister has complained that Wyler's plan to connect all of Rwanda's secondary schools to the Internet by the end of November is behind schedule. The local press has been quick to criticize his program for what it perceives as excessively high prices and corruption.

Power outages are another recurring problem. They are so common in Rwanda that some supermarkets keep candles burning to be prepared for the next blackout. The country now plans to increase power production by more than 50 percent using methane gas deposits in Lake Kivu as an energy source.

Wyler is joined by Christopher Lundh, Terracom's CEO and a man with a reputation as an experienced troubleshooter. Wyler is convinced that Lundh is the right man to transform the business from a lofty vision into a solid company. "If Greg is the good cop, then I'm the bad one," says Lundh pleasantly.

Wyler seems relieved. He arrives at the airport an hour later to catch a flight home to his wife and family. When asked whether Rwanda will succeed in making the giant leap from an agrarian to a knowledge-based society, the new head of Terracom shrugs his shoulders. "We're developing a solid, profitable network. The region will have five or more Terracoms in a few years." Although the pioneering phase is gradually coming to a close, the toughest work still lies ahead for Wyler and his business.

Barefoot workers dig up the ground in front of the presidential palace. Freddy Kamuzinzi, a giant of a man, is supervising the work. Wyler's nickname for Kamuzinzi is "Freddy Fiber." A former fighter in the rebel army, he now manages up to 3,000 cable installers. "Machines are useless here. They require too much space, and we have to be extremely careful when we dig, because we're constantly running into power and water lines that were installed haphazardly in the past."

Kamuzinzi's men have already buried more than 300 kilometers (186 miles) of fiberoptic cable. In the coming weeks, his army of workers will install four times as much cable, finally providing Rwanda with a broadband connection to neighboring Tanzania and Uganda and eliminating the expensive satellite detour.

This is good news for Terracom. East Africa's Internet island is growing.