Geologist Dereje Ayalew and his colleagues from Addis Ababa University were amazed -- and frightened. They had only just stepped out of their helicopter onto the desert plains of central Ethiopia when the ground began to shake under their feet. The pilot shouted for the scientists to get back to the helicopter. And then it happened: the Earth split open. Crevices began racing toward the researchers like a zipper opening up. After a few seconds, the ground stopped moving, and after they had recovered from their shock, Ayalew and his colleagues realized they had just witnessed history. For the first time ever, human beings were able to witness the first stages in the birth of an ocean.

Normally changes to our geological environment take place almost imperceptibly. A life time is too short to see rivers changing course, mountains rising skywards or valleys opening up. In north-eastern Africa's Afar Triangle, though, recent months have seen hundreds of crevices splitting the desert floor and the ground has slumped by as much as 100 meters (328 feet). At the same time, scientists have observed magma rising from deep below as it begins to form what will eventually become a basalt ocean floor. Geologically speaking, it won't be long until the Red Sea floods the region. The ocean that will then be born will split Africa apart.

The Afar Triangle, which cuts across Ethiopia, Eritrea and Djibouti, is the largest construction site on the planet. Three tectonic plates meet there with the African and Arabian plates drifting apart along two separate fault lines by one centimeter a year. A team of scientists working with Christophe Vigny of the Paris Laboratory of Geology reported on the phenomenon in a 2006 issue of the Journal of Geophysical Research. While the two plates move apart, the ground sinks to make room for the Red Sea and the Gulf of Aden.

Bubbling magma and the smell of sulphur 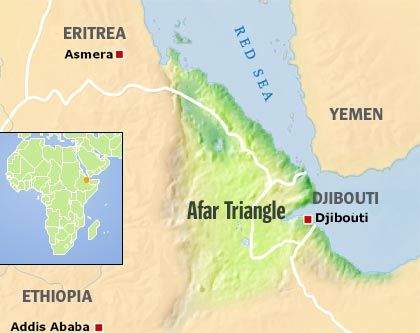 A third crevice cuts south, splitting not far from Lake Victoria. One branch of the rift runs to the east, the other to the west of the lake. The two branches of this third crevice are moving apart by about one millimeter a year.

The dramatic event that Ayalew and his colleagues witnessed in the Afar Desert on Sept. 26, 2005 was the first visual proof of this process -- and it was followed by a week-long series of earthquakes. During the months that followed, hundreds of further crevices opened up in the ground, spreading across an area of 345 square miles. "The earth has not stopped moving since," geophysicist Tim Wright of the University of Oxford says. The ground is still splitting open and sinking, he says; small earthquakes are constantly shaking the region.

Scientists have made repeated trips to the area since the drama of last September. Locals have reported a number of new cracks opening in the ground, says geologist Cynthia Ebinger from the University of London, and during each visit, new crevices are discovered. Fumes as hot as 400 degrees Celsius (752 degrees Fahrenheit) shoot up from some of them; the sound of bubbling magma and the smell of sulphur rise from others. The larger crevices are dozens of meters deep and several hundred meters long. Traces of recent volcanic eruptions are also visible.

In a number of places, cracks have opened up beneath the thin layer of volcanic ash that covers the region. As there is no ash in the fissures, it's clear that they opened up after the volcanic eruptions, most of which took place at the end of September or in October, 2005. A number of locals who fled the eruptions have reported that a black cloud of ash -- spewed out of the Dabbahu volcano -- darkened the sky for three days.

A new ocean floor on the Earth's surface

Basalt magma has risen into some of the crevices. For the moment, Ayalew explains, the lava seems not to be rising further. A number of recent eruptions, though, have left layers of new basalt lava on the Earth's surface. And it's the exact same kind of lava that spews out of volcanic ridges deep under the ocean -- a process which slowly pushes older lava sediments away on either side. The process has only just begun in the Afar Triangle -- and scientists for the first time can witness the birth of a new ocean floor.

The source of the African magma looks to be a gigantic stream of molten rock rising from beneath the Earth's crust and slicing through the African continental plate like a blow torch. It's a process that began thirty million years ago when lava broke through the continent for the first time, separating the Arabian Peninsula from Africa and creating the Red Sea.

Now, it's the Afar Triangle's turn and it's sinking rapidly. Large areas are already more than 100 meters (328 feet) below sea level. For now, the highlands surrounding the Denakil Depression prevent the Red Sea from flooding these areas, but erosion and tectonic plate movement are continually reducing the height of this natural barrier. The Denakil Depression, which lies to the east of Afar, is already prey to regular floods -- each flood leaving behind a crust of salt.

Africa to lose its horn

The chain of volcanoes that runs along the roughly 6,000 kilometer (3,730 mile) long East African Rift System offers further testimony to the breaking apart of the continent. In some areas around the outer edges of the Rift System, the Earth's crust has already cracked open, making room for the magma below. From the Red Sea to Mozambique in the south, dozens of volcanoes have formed, the best known being Mt. Kilimanjaro and Mt. Nyiragongo.

These fiery mountains too will one day sink into the sea. Geophysicists have calculated that in 10 million years the East African Rift System will be as large as the Red Sea. When that happens, Africa will lose its horn.