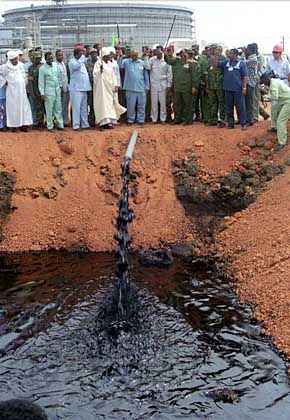 Sudan sits on rich oil reserves. With peace making inroads in the war-torn country, many would like access to it.

An illustrious group of people came together in Nairobi's sun-drenched soccer stadium 10 days ago. Ugandan President Yoweri Museveni was there, in a double-breasted suit and his signature straw hat. Rwanda's autocratic leader, Paul Kagame, wearing a dark blazer, showed up as did Ethiopian prime minister and former rebel leader Meles Zenawi. Kenyan President Mwai Kibki and his entourage were also there, as were throngs of half-naked tribal warriors, bystanders, and pickpockets. But at the center of attention were the protagonists themselves: Sudanese President Omar el-Bashir, Vice President Ali Osman Mohammed Taha, and their adversary, rebel commander John Garang, the leader of the Sudanese People's Liberation Army (SPLA).

On Sunday, Jan. 9, the once bitter opponents signed a 240-page peace treaty, marking the end of a two-decade civil war in Sudan that has claimed upwards of 2 million lives. The man who brokered the deal, United States Secretary of State Colin Powell, also made a brief appearance, although he didn't stay to celebrate the treaty with the assembled African leaders and their 10,000 invited guests.

Observers believe recent events in Sudan will mark a historic turning point for the country. Under the current peace treaty, there will be a six-year transitional period in which the country's current rulers, Muslim Arabs in the north, will essentially share power with the rebels, Christian and animist blacks from southern Sudan. However, the peace agreement has no effect on the ongoing bloodbath in the western region of Darfur. 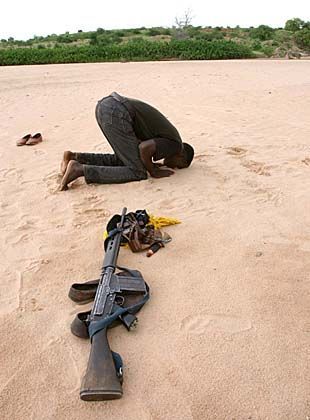 The SPLA rebel group won a large degree of autonomy for the southern part of Sudan. The region may secede completely in six years.

Initially, there will be two military forces in the country. SPLA leader Garang will become Sudan's vice president, and the two sides will split the country's future oil revenues. Elections will take place in three years, and a referendum will be held at the end of the six-year period to determine the fate of what are now essentially two states. It's considered likely that the southern Sudanese will then opt to part ways with the hated Muslims from the north, forming a southern state that could be called New Sudan, with Garang, a friend of the Americans, as its leader. That, at least, is the theory.

But while the north-south military clash has been stilled for now and signs that the Darfur slaughter may also be brought under control in the not-too-distant future, a new conflict is now threatening to unfold in Sudan. An economic one. Sudan, after all, has large oil reserves and China has, until now, been the country's biggest customer. With peace -- and a lifting of a US economic embargo -- on the way, American oil companies now have their eyes on the country.

Which is one reason the US government has been active in seeking a solution to the Sudan problem. There are others as well, of course, ranging from a desire to improve relations with a country long viewed as a potential breeding ground for terrorism (after all, Osama bin Laden was once a guest of the Bashir regime) to a need to appease influential Christian fundamentalists in the United States who insist on reducing the protracted Sudanese civil war to a simplistic war of faith.

But the biggest motivator is oil. The Americans, as part of the war on terror, long forbade US oil companies from any involvement in Sudan, long considered a rogue state. The result? While other western companies such as Talisman and OMV were forced to back out of the Sudan oil industry, China has quietly positioned itself to become the country's most important trading partner. 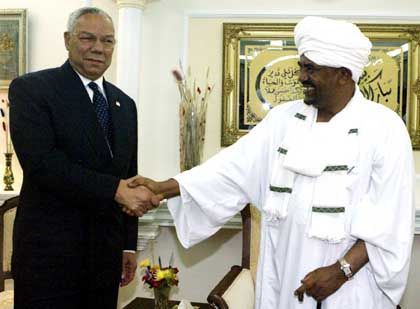 US Secretary of State Colin Powell and Sudan President Omar El-Beshir. The US helped broker the peace deal.

Today, China buys 60 percent of the oil produced in Sudan and Sudanese production covers six percent of China's crude oil needs, about as much as the country currently imports from Russia. The Chinese have built a 1,600-kilometer pipeline from the oil fields in southern Sudan to Port Sudan on the Red Sea, part of a reported $15 billion investment in the Sudanese oil industry. But trade relations between the two countries don't just go in one direction; China is also Sudan's biggest weapons supplier. Indeed, it was this tight economic bond that made China reluctant to agree last autumn to United Nations sanctions against Sudan stemming from the massacres in the western region of Darfur.

Sudan's oil reserves are estimated at 635 million barrels and the Sudanese currently produce 320,000 barrels a day, an amount they plan to increase to 500,000 barrels per day in the near future. Most of the country's oil is pumped from its "Unit 6" oil field, and the China National Petroleum Company happens to hold the concession for drilling in this field.

But Beijing's dominant position could now be in jeopardy. Now that the Nairobi peace treaty has been signed and a resolution of the Darfur conflict could be just over the horizon, US sanctions against Sudan could be lifted, paving the way for American oil giants ChevronTexaco and Exxon Mobil to enter the country. 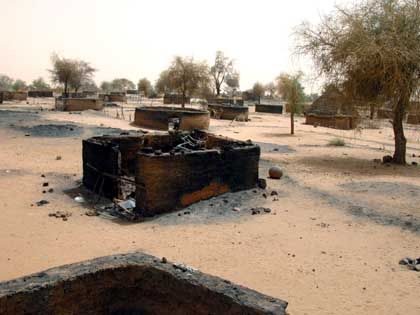 The Darfur region was hit hard by ethnic slaughter in 2004.

Newsweek already sees the beginnings of a figurative "Sino-American war" over future oil shipments, a conflict likely to be played out in Africa. With US plans to use African producers to satisfy a quarter of the country's oil needs, it's not surprising that Chinese dominance in Sudan is making people in Washington nervous.

But America's foreign policy has entered uncertain territory. Eritrea, established more than 11 years ago at the end of the Ethiopian civil war, is the only independent country formed since African borders were drawn by colonial powers at the Berlin Conference in the winter of 1884 to 1885.

It's a Pandora's Box that may have already been opened. Just as the secession of a portion of Sudan, Africa's largest country in terms of land area, seems to have become a possibility, rebels in the country's western Darfur region have taken to their weapons, setting a bloodbath in motion. The conflict there between Arab nomads and settled farmers has reportedly claimed 70,000 victims to date, a situation that could well lead to the Darfur region also demanding independence.

This could just be the beginning. Once the spark of secession jumps to more populous nations like Congo and Nigeria, Africa could be consumed by social and ethnic upheavals and military conflicts of unforeseeable proportions.