Looking out from the terrace, heaven and earth merge into a grey blur. Heavy rain pours so incessantly that one would expect Anne van der Molen to be getting just a little nervous. 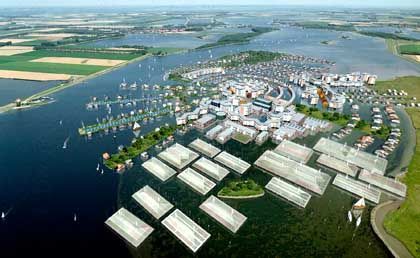 Model of a "swimming city." Could this be an answer for New Orleans, too?

"Tomorrow does not look any better, according to the weather forecast," she says, calmly sipping her coffee. She does so in spite of the fact that her house stands directly on the Maas dyke - on the side facing the river, to be exact. Yet the nurse, sitting on her garden chair under the awning, feels as cozy and safe as if she were "snowed in up in a mountain hut, with a log fire glowing and the pantry full." The Maas can go on rising as much as it likes, for all she cares. Her house can swim. As the water level climbs, the house itself can move up five meters, if necessary. "The elements don't bother me," she says.

There are 37 houses strung along this branch of the Maas like a row of beads. At first glance, they seem quite unremarkable. Two storeys high, semicircular metal roofs and yellow, green or blue facades - hardly any clues let on that these are The Netherlands' first amphibious houses. The cellar, in this case, is not built into the earth. Instead, it is on a platform - and is much more than a mere storage room. The hollow foundation of each house works in the same way as the hull of a ship, buoying the structure up above water. To prevent the swimming houses from floating away, they slide up two broad steel posts - and as the water level sinks, so they sink back down again. 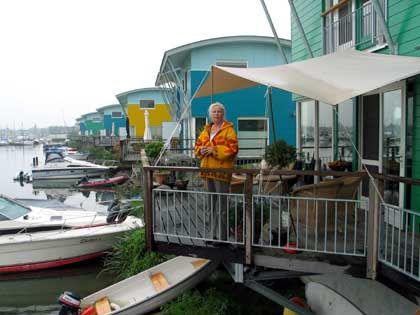 "The columns have been driven deep into solid ground," explains Dick van Gooswilligen from the Dura Vermeer construction company. "They are even strong enough to withstand currents you would find on the open seas." Gooswilligen is currently busy guiding dozens of journalists from the United States through the watertight settlement in the Maasbommel district, close to Nijmegen. "As global warming causes the sea level to rise, this is the solution," he explains into a microphone. "Housing of this type is the future for the delta regions of the world, the ones which face the greatest danger."

Soundbites like these are just what Americans want to hear these days. Hurricane Katrina and her lesser cousin Hurricane Rita have sparked interest in the low lying Netherlands. Hordes of hydraulic engineers from Louisiana or Texas are making the pilgrimage to the North Sea coastline to look at the fortifications. The inland river dykes are also considered exemplary models.

The Netherlands Sinks a little Lower Every Year

German catastrophe management teams are just as curious. Climate patterns today suggest that torrential rainfall is something we can expect plenty more of in the future. This year's floods in the Alps or those along the River Elbe three years ago could well be warning signs of what awaits us. Climatologists predict that precipitation in The Netherlands could increase as much as 25 percent. At the same time, because of the small kingdom's dense population, there is increasing pressure to build in areas prone to flooding. Already, though, the country defies the laws of physics simply by existing: More than a quarter of its land lies below sea level. And, year by year, the land is sinking a little bit lower. The Dutch protect themselves from going under through a network of canals and pumps. It is not only the sea which threatens the mighty barrage on the coast. On the other side lies the Rhine River, which branches out and forms a wide-reaching delta with the Maas. To prevent such huge swaths of land from flooding in summer and winter storms, the Dutch are designating more and more land along their rivers as flood zones. Within the next few decades, the area will compose close to 500,000 hectares -- or about twice the size of the German state of Saarland.

This will only be possible if people, industry and agriculture can be successfully relocated to safe territory - which is hard to imagine, given the resistance mounted by some of those affected. Officials have, therefore, decided to demonstrate first of all that it is possible to live in the so-called flood zones. In early October, 15 test areas were announced. A stringent ban on construction in these areas has now been lifted - provided buildings constructed are amphibious houses and nothing else. This means that, in a worst case scenario, excess water from flooded rivers can still be diverted this way.

"You cannot fight water, you have to learn how to live with it", states Sybilla Dekker, the minister in charge. Her department has arranged a competition for engineers, urban planners and architects to design living accommodation, greenhouses, parking lots and factories which would float and could grow into "waterproof" towns.

One of the leading architects in this relatively new discipline of maritime architecture is Koen Olthuis. His aptly named Waterstudio.nl office has already designed a number of contemporary houseboats with a parking deck for the car and lower deck storage for a motorboat. Now, his team is even coming up with plans for office buildings a hundred meters in height that "swim." The key to making this idea a reality is a patented technique whereby the foundation of the construction can be transformed into a float. A foam core is encased in concrete, with steel cables securing it against the pull of potential currents. Individual pontoons, whether for residential blocks or chicken coops, can be joined to one another like Lego blocks. As a result, a maritime settlement is born.

"This construction model is built to last at least one hundred years," Olthuis says. If anything should happen to the foundation, there is no need to call in the construction company. Instead, the whole thing can be taken to the dockyard.

Family "arks" of the future

The architect from Rijswijk hopes to tap into a worldwide trend. Increasing numbers of people are gravitating towards the water, out of necessity, for financial gain or, in some cases, quite simply for the wonderful view. "Thanks to watertight buildings, this impulse need not be fateful," he says. His bobbing buildings have not only found favor in the Polder lands, he has also prepared concepts for Dubai.

The first town based on this model, numbering 12,000 houses, might conceivably be built close to Amsterdam's Schiphol airport. The Netherlands are particularly low in this area. When planes come in for a landing here, one can see countless rectangular islets amid a picturesque, watery landscape. Canals weave their way like veins through the swaying reeds of green land which invariably opens out into ponds or lakes. By the year 2010, amphibious houses like those in Maasbommel may well form the first residential area here - or perhaps greenhouses will dominate the landscape, like the one opened earlier this month by the minister of agriculture in The Hague.

At this stage, such model houses cost more than conventional housing. The amphibious buildings in Maasbommel cost approximately 250,000 to 300,000 for a 120 square meter home. This is due in part to the flexible nature of the construction which also plays a role in creating feed lines for gas, electricity, drinking water and drainage. Like the foundation, they, too, have to be able to adapt to the changes in height of the premises.

But, when the floating construction model goes more mainstream, the price of a one family "ark" should drop dramatically. "At the end of the day, we will save on a lot of the costs conventional building methods incur doing things like securing foundations in soft ground. We won't have to contend with that," Olthuis points out. It remains an utter mystery to him why water-proofed construction is not yet common practice.

He can only watch and shake his head as his television broadcasts fresh pictures of floods in one part of the world or another. "Those people, breaking their backs piling sandbags on their doorsteps, I feel really sorry for them."

Translated from the German by Gareth Davies