Editor's Note: This is the second installment of a multi-part series. You can read the first part here.

It takes hours before John Ampan is able to speak again. As he sits in the back seat, staring out the window, the tears rolling down his face, our vehicle, a Nissan, travels eastward along the coastal roads from Ghana to Lagos.

It was a Ford Caravan back then, when he made the journey the first time, and four men sat on a bench in the back. Each had paid the equivalent of €10. They didn't know the driver, the man who was taking them into a future; nor did they know where that future might be.

When he manages to speak again, John says that little has changed. He feels the same emotions, the same inability to verbalize his feelings, the same physical rigidity he experienced on a morning 14 years ago, when his wife held him and wouldn't let go. In the end, he says, he simply turned around and got into the van. It's easy, he says -- you just go. But what you don't realize is that you are about to become the loneliest of human beings.

John stares out at the slums on the border between Togo and Benin, at the billboards that read: "God Loves You."

African border guards have a lot of power, and they routinely abuse it. They symbolize everything that is wrong with the continent. They use arrogant hand gestures to shoo away people as if they were pesky flies. At a typical border crossing -- a rope tied to a post at one end and held in the border guard's hand at the other -- they sit, their legs spread out in front of them, chewing on toothpicks and spitting on the ground.

When an attractive woman comes along, a bucket of water or a bale of cloth balanced on her head, the all-powerful border guards pull the rope taut, forcing the woman to stand there in the midday heat. "Turn around," they say. The woman turns around. "Again." She turns around again. "What do you have under your skirt?" they demand. She lifts her skirt. The powerful stand up, walk away, return with a bag of drinking water, bite off a corner, spit it into the dust, drink and stare at the woman's legs. Then they wave her away, telling her to get out of their sight.

They collect bribes from anyone who looks as though he might have some money. We pay the man standing on the trunk of our car €15, and for another €15 he agrees not to force us to empty our pockets. They want John to pay €30 before they'll even look at his passport. When he refuses, they place the passport on the table and allow the next person to cross the border. After an hour John pays the bribe, the guards wave us through and John tells us about his continent.

Corruption will destroy Africa. It would have been possible to fight corruption decades ago, but now it's too late. Everyone takes, everyone pays, every favor costs money. Corruption is part of our culture and our daily life. It eats away at us.

It will be dark in 20 minutes, and we have to be in our hotel by then, because this is Lagos. "This is Lagos!" John keeps repeating. What he means is that there are no more rules here, that nothing here is the way it is in other cities. 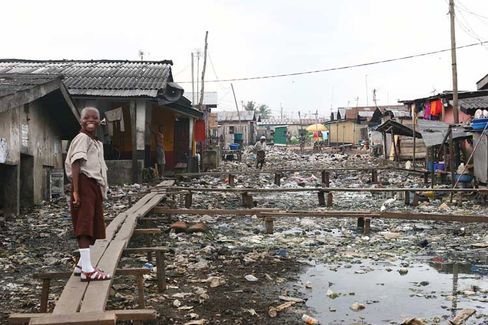 A slum in Lagos, Nigeria: "Center of Excellence"

Lagos is a miserable city, a city of filth and garbage and mud and paths consisting of nothing but a few boards thrown over sewage so you can at least stay halfway dry -- boards they call "major roads" here. Children sit in front of oil drums and play with sticks floating in the muck, as piles of garbage grow in front of huts.

Everyone here has empty eyes. The people are unloved, unneeded, not encouraged and unwanted. In fact, they are completely superfluous. They have no schools, no insurance policies and no books. They have no clean water and the stench they breathe can hardly be called air.

Lagos is a city of 15 million and its population is expected to jump to 25 million within the next 15 years. But this city will never point anyone in a better direction again. Its mountains of garbage will never shrink, and its people will never see a better life. It's too late for that.

Everyone here asks about Europe. How do I get there? White man, will you take me with you? Do you want to marry me? Will you take along my sister? My daughter?

Bribes are necessary every step of the way in Lagos. Nigerian police officers are nothing more than highway robbers. After all, outside of collecting money, there is little point to their jobs. There were 17 checkpoints along the 100-kilometer (62-mile) stretch of road from the border to Lagos, and every checkpoint was manned by policemen wielding batons. Two hundred naira here, 1,000 there -- everything here seems to revolve around extracting as much money as possible from anyone who can pay.

What it is, really, is legalized theft. They place tree trunks or planks covered with nails across the road, forcing drivers to stop, and when they want you to pay, you pay. The bribery process here is called, euphemistically, "to settle" -- to solve a problem. The Nigerian police's motto, displayed on every police car, is: "To serve and protect with integrity."

Dutch Architect Rem Koolhaas has called Lagos the "paradigm of the postmodern city," and Axel Harneit-Sievers, who heads the local office of the German Heinrich Böll Foundation, says that Lagos is "ultimately ungovernable."

The lack of personal barriers, the all-encompassing sense of being assaulted and the constant aggression, pitting everyone against everyone else -- this is Lagos.

When Ampan, born in 1959, left Ghana for the first time, he was 22 and had only recently married. There was no work in Accra, but it was 1981 and Nigeria was a country where everything seemed possible. New oil money meant new construction everywhere -- houses, office towers, palaces. Ampan stayed in Lagos for five months, where he worked for Osmat Construction, a local company under contract to Strabag, an Austrian construction company. He lived in the Ghanaian ghetto, where wooden huts were built on stilts over puddles and riverbeds, and where he shared a space of about 8 square meters with another man. The men would share the hut according to their shifts, with the man who worked the night shift spending his days in the hut, and vice-versa. Garbage was piled around and below the hut, rats were common, mosquitoes were everywhere and gangs would set fires to the huts of anyone who refused to pay protection money.

"I never had a peaceful night there," says John. He returned to Lagos a second time in 1992, at the beginning of his journey to Europe.

This time he found work at the oil company Mobil. John was a well-spoken man, and he soon became the chauffeur of Mobil's local manager, Bola Ahmed Tinubu. He was convinced that he had made it. His job consisted of driving his boss into the city, waiting in the Mercedes and occasionally driving the boss's wife when she went shopping. But one night Tinubu gave a large reception, during which thieves entered his villa. The thieves apparently knew the way and marched directly into the bedroom.

Every employee with access to the house was sent to jail.

Lagos's Ikoyi prison is a brown building with black marks on its walls. Wrecked cars stand in front of the building, where women sell moldy white bread and power lines suspended from poles drag in the mud. A Nike poster on a nearby building proclaims: "Don't fail!"

In the prison, 120 men were crowded together in a space measuring about 12 by 8 meters. The toilet was a hole in the floor in the middle of the cell. The 120 men formed gangs. They raped each other. They robbed each other. They listened to the screams of prisoners being tortured. John prayed. They called him "chaplain" because he read the Mass for the others, and at some point a brawny fellow from Benin City took John under his wing. The man's name was Bob Izoua. Life became easier for John. Bob Izoua's family would send minibuses filled with soap, clothing and bread, which Izoua would distribute among his supporters.

John was released after six months. He never saw an attorney, he was never given a court hearing, he was never accused of a crime. It was time to go. He missed his wife, and he hesitated for a moment before choosing the opposite direction -- north.

Are you going to Niger? Spain? Europe? North, at least to Morocco or Libya? Migrants are shy when it comes to asking questions, shy and quiet because what they're envisioning is a journey into a gray zone. Everyone knows the deal, but everyone also knows it's forbidden. Much depends on how much they're able to pay, and even if they can pay, their ability to continue the journey depends on the capriciousness of police officers, who could just as easily send them back, send them to prison or subject them to beatings. Young couples, families and young men sit by the sides of the major roads or at bus terminals, negotiating and waiting. The daily lives of migrants are made up of successive periods of waiting. They travel light, usually carrying no more than one bag so that they can remain flexible. Of course, they have few possessions because they have already sold as much as possible to raise money for the trip. No one carries books. Those who are fleeing to find a better life aren't people who read.

Most sit motionless under trees, dozing and expending as little energy as possible. Occasionally they wave off a few mosquitoes, and then they become rigid again.

There will be a truck tomorrow, someone says, or definitely the next day. This sort of information is a commodity in the world of migrants. But then the next day dawns and the middleman says: "No, not today, and not tomorrow. The truck will leave at the end of the week, definitely, but unfortunately the prices have changed. We need the extra money for your security." What this means is that policemen have to be bribed, and for the migrants it means renegotiating what has already been negotiated and agreed upon -- and spending a few more days sitting under a tree.

As we leave Lagos, we pass Prayer City. It's an area filled with stadiums and arenas, where hundreds of thousands come on the weekends to beg for God's blessing from preachers like Reinhard Bonnke, a German who claims he can heal diseases like leprosy.

The road takes us north in the direction of Europe. It's a four-lane highway peppered with potholes and interspersed with roadblocks, forcing vehicles to stop again and again.

A policeman knocks on the window. His eyes are bloodshot and he seems unsteady on his feet.

The three phrases -- "I love you," "what you got for me?" and "you can go" represent a typical Nigerian relationship in three sentences.

Africans are greedy and excessive. We lack the basic virtues to develop further. "Diligence" and "punctuality" are foreign words in Africa.