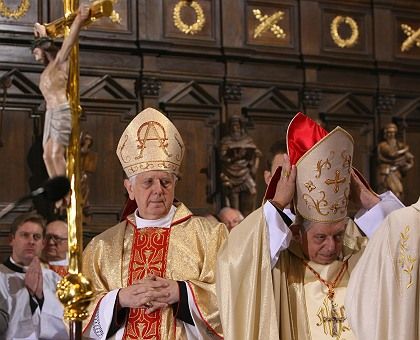 Father Tadeusz Isakowicz-Zaleski was fast asleep when there was a knock on the door of his presbytery in Wola Justowska near Krakow. Looking through a gap in the door, he saw a young woman in a white doctors coat and two men who looked like paramedics. But when the priest let them in, he was thrown to the ground and handcuffed. The three intruders wrecked the house, and hit and kicked the priest, before fleeing.

This attack, which took place on a December night in 1985, was the second suffered by the priest, an outspoken critic of the communist regime. Six months earlier, Zaleski was ambushed by unidentified assailants in front of his mothers house: They burnt a V on his chest with a cigarette -- the victory sign of the outlawed Solidarity trade union, which the priest supported. There is absolutely no doubt that these were people from the state security forces, says Zaleski. None of them have ever been arrested. I dont care about that, he says. Im not interested in vengeance.

But 20 years on, Zaleski has now finally been allowed to view the secret files compiled about him by the state. The shock was worse than the original attacks, he says. The yellowing pages reveal categorically that he was on the black list of the state security services (SB) and was constantly being watched -- by fellow priests, other brothers in the order, friends and acquaintances.

Zaleski continued his investigations and is about to publish a book in which he accuses 39 clergymen in the Krakow region of spying for the secret services. The Polish Church has committed a serious error, says Zaleski, by neglecting to deal with its secret service contacts since the end of the communist regime -- an error for which the Church will now pay dearly. This past cannot be covered up, he explains. It is like a serious, terminal disease that eventually catches up with you.

This was certainly the case when it came to the scandal of the archbishop of Warsaw, Stanislaw Wielgus, who was recently forced to resign. A man who for years was a willing informant for the secret services, was within a hairs breadth of becoming one of Polands highest ranking clergymen. And what is even worse, up until the very end, Wielgus denied all the allegations leveled against him. He deceived his flock, his colleagues and even the Pope himself. It was only thanks to a discreet, behind the scenes word from Pope Benedict XVI that Wielgus agreed to step down at the very last moment. The damage done to the Catholic Churchs reputation is enormous, believes Father Zaleski.

The end of the Round Table

The scandal has provoked a fresh nation-wide debate about the former secret police. The historical compromise between dissidents and communists appears to have finally disintegrated. In 1989 the regimes opponents gathered round a table with those in power to negotiate a peaceful transition to capitalism and democracy. This meant that the apparatchiks of communist Poland, along with their network of spies, remained largely untouched.

As a result the secret service files on one particular prominent theologian, called Stanislaw Wielgus (codenames Adam, Adam Wysocki or Grey), were covered up. Starting in 1967, when he was studying at the University of Lublin, the clergyman went on to meet with SB agents at least 50 times. They greatly valued their cassock-clad informant: According to the files, their trust grew in Wielgus, who talked increasingly openly about his colleagues views, about candidates in recruitment interviews and the mood in seminaries. In 1973 he even made a written commitment to cooperate with the Polish secret services -- and then promptly received a passport, allowing him to go abroad for two years on a grant to study at the Alexander von Humboldt Foundation in Munich. When the right-wing newspaper Gazeta Polska first reported the story in December -- at the time Wielgus was still bishop of Plock, but had already been nominated by the Pope to be archbishop of Warsaw -- the cleric denied everything. He had never worked with the communists, he said, and that was what he told the Pope.

He could count on the clergy to cover his back. For years influential church leaders, in particular Primate Józef Glemp, have vehemently opposed opening up the communist security service files -- known as "little bags" in Poland. Their argument was that this would sow hate and result in witch hunts.

But it soon became impossible to keep the sins of the pious Church leader covered up. A few days before the scheduled investiture ceremony was due to take place in Warsaw's John the Baptist Cathedral, journalists unearthed files categorically proving his secret service contacts. Wielgus made a pompus statement, admitting his transgressions.

By then, however, it was already too late. Liberal bishops had worked late into the night putting pressure on the Vatican to remove Wielgus. And the leaders of the Polish government are reported to have sent an 80-page fax directly to Benedict. It was only then that Wielgus gave in and declared his resignation during the enthronement mass on Sunday Jan. 7.

Up to 15 percent of priesthood collaborated

The affair is the high point of a whole series of secret service revelations which have rocked Poland in recent years: Konrad Hejmo, who for decades was responsible for looking after Polish pilgrims to the Vatican, spied for the communists; as did Mieczyslaw Malinski, who studied with, and was a friend of, the late Pope John Paul II. And Michal Czajkowski, who was given much credit for reconciling Catholics and Jews, even gave the secret service information about Jerzy Popieluszko, a priest who was abducted in 1984, beaten up and was later found dead in a reservoir. 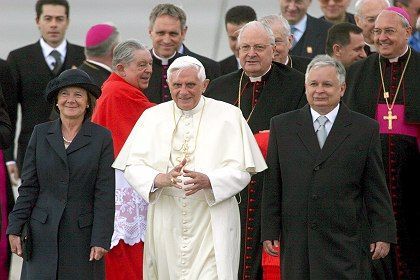 When the communists seized power in Poland in 1945, they realized that the Catholic Church would represent a mighty opponent: After the country was divided up between Prussia, Russia and Austria in the 18th century, the Church developed into a champion of Polish nationhood. And when Poland was occupied by the Nazis, much blood was shed by the Polish clergy, which helped increase the Churchs authority even more. After the war the communists closed seminaries, and imprisoned numerous clergymen. It wasnt until 1956 that the state and the clergy managed to achieve a half-way peaceful co-existence. Later the relationship deteriorated again when the Church sided with the independent Solidarity trade union. The Polish secret service now tried even harder to infiltrate the priesthood. They tempted priests with career opportunities and foreign trips, and intimidated them with threats of going public with stories of alcohol binges and affairs with women. Particularly stubborn clergymen were bullied by gangs of thugs.

SB agents were particularly active in the circles around the Krakow cardinal Karol Wojtyla. The future pope ordered his colleagues never to speak to the secret services. He himself kept to this rule, but others were less steadfast. Historians estimate that up to 15 percent of the priesthood, including many bishops, cooperated with the state.

The secret service kept files on almost every single priest, their apartments were bugged and their private conversations were transcribed. Those who signed a statement of commitment, as Wielgus did, were seen as particularly reliable.

But even in his case, it is difficult to judge how much damage his activities really caused those he spied upon. It is a problem that for years was used by the churchs leaders as an argument for almost completely avoiding dealing with its secret service past.

The Wielgus case can be seen as a symptom of a deeper crisis within the church, says the philosopher and ecclesiastical expert Tomasz Terlikowski. He believes that the institutions leaders are still "extremely sensitive" to criticism, which means they continue to resist allowing the Polish public to judge the churchs dignitaries by the same standards as secular politicians. They could not tolerate high-ranking church dignitaries simply being replaced like corrupt ministers if they did something wrong.

But it is especially the free press which acts as a thorn in the side of the conservative clergy. Primate Glemp still believes that the Wielgus affair was a plot cooked up by the media: I am convinced that this was an organized attack, and there will soon be another one, he told astonished journalists.

However it seems that the hardliners days are numbered. Józef Michalik, head of the Polish bishops conference, and after Glemp the Catholic Churchs main strongman, has welcomed Wielguss resignation. On Friday, Polands bishopric negotiated for hours about how to deal with its secret service past. One of their demands is that spies within the church shouldnt be the only ones to be punished: secular agents, censors and thugs also deserved their just deserts.

The president and prime minister of Poland, the twins Lech and Jaroslaw Kaczynski, view this task as their personal responsibility. During the mass, when Wielgus announced his resignation, Lech couldnt contain himself and clapped enthusiastically -- only to be shocked into submission by such dignified surroundings.

Back when they were in Lech Walesas opposition group, the brothers were already demanding that the communists get tough treatment when brought to account. Now they want to withold the pensions that former secret service agents get by introducing a special law. While a teacher gets a pension of maximum 1,200 Zloty (€310), ex-employees of the secret services get almost three times that amount. If the Kaczynskis get their way, former agents will in the future receive only 600 Zloty. We want to hit harder than we have so far, said Jaroslaw Kaczynski, because we now have the opportunity.