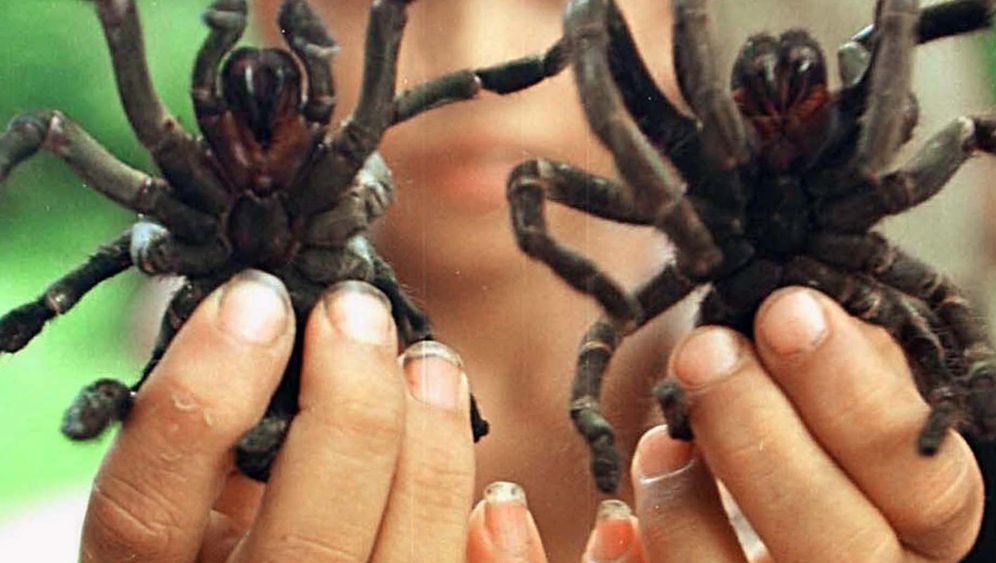 As the meal is served, 10 fearless gourmet diners turn their attention to the creations of celebrity English chef Thomasina "Tommi" Miers. It's a sunny Sunday in spring at a long table on the front lawn of the Museum of Natural History at the venerable University of Oxford.

Artist Angela Palmer sent out the invitations to this "Grand Banquet of Rainforest Insects" to garner support for rainforest protection by offering a meal with courses made up of insect dishes. Yes, eating ants, dragonflies and locusts is apparently good for the environment.

"Insect protein is not only nutritious," Palmer says, "it's also particularly environmental." Raising insects doesn't require grazing land, concentrated feed or septic tanks, she adds, yet they taste just as good as pork or beef. But, of course, that might take some convincing.

About 150 interested onlookers crowd around the tables, their expressions a mixture of curiosity and disgust. "I feel like I'm on the show 'I'm a Celebrity… Get Me Out of Here!'" says Martha Kearney, a broadcaster at the BBC chosen to attend the meal. "It's awful to imagine the insects might still be crawling around when you swallow them."

As Kearney sees it, the more processed the insects are, the better they taste. She helps herself to an appetizer of dried, salted mealworms that look like miniature pretzel sticks -- and taste about the same. "Very good," she says.

Film producer Peter Bennett-Jones, whose hits have included the "Mr. Bean" movies, is not quite as thrilled. "I think the most important spice here is the mescal," he says while pouring himself another shot, making sure not to let the plump larva at the bottom of the bottle slip into his glass.

"But you must admit, the leafcutter ants taste terrific!" says the Colombian ambassador standing next to him, as he takes another helping from the bowl full of little dark-brown balls that are actually the plump abdomens of Atta laevigata ants. "We call them 'hormigas culonas,'" the ambassador adds, meaning "fat-bottomed ants."

And then the ambassador really gets going. "When we were children, there was always a big celebration when the queen ants started their nuptial flight," he says. "We caught them with our hands, bags and hats." The ants were then coated in salt, grilled and eaten like peanuts. "Whenever I eat fat-bottomed ants, I feel like a little boy again," the ambassador says.

The ants also happen to be the undisputed favorite at the table -- crisp when bitten into, with a smoky flavor and a nutty finish.

Sir David is famous for shaping the discipline of surface science at Cambridge University together with Germany's Gerhard Ertl, a Nobel Prize laureate in chemistry. But now the slender gentleman is also reminiscing while munching on insects. As a schoolboy in South Africa, he says he used to eat live termites to impress the girls in his class. Now he praises insects as a delicacy that, unlike cattle, release very little greenhouse gas into the atmosphere.

"What's the difference between a prawn and a locust?" asks Miers, the chef. "Only the fact that one lives in water and the other on land." Miers runs four Mexican restaurants in London called "Wahaca." She has also written several cookbooks and hosted a number of cooking shows.

Christopher Gray, food critic for The Oxford Times, fearlessly bites off the head of a sautéed cricket. "I don't know," he says. "It tastes too earthy to me, almost a little barnyardy."

Oxford has a history of hosting odd meals featuring exotic dishes. Around 150 years ago, the well-known zoologist Francis Trevelyan Buckland caused a stir with his culinary flights of fancy. For example, he determined that earwigs taste "horribly bitter" and nearly as bad as moles and bluebottle flies.

This was an era that saw a great deal of fear over the so-called "population trap" outlined by Thomas Robert Malthus. The British economist predicted that agriculture would not be able to keep pace with population growth, leading to famine and human suffering. In 1860, Buckland founded the Acclimatization Society, which aimed to introduce organisms like silkworms, beavers and parrots into the British diet.

Though few followed Buckland's example, the idea survived. "Wood louse sauce is equal, if not superior, to shrimp," British entomologist Vincent Holt wrote in his 1885 book "Why Not Eat Insects?" He also wrote of the joy of "a fat month nicely baked," urging his readers: "Try them, ye epicures! What possible argument can there be against eating a creature beautiful without and sweet within; a creature nourished on nectar, the fabled food of the gods?"

Though Holt was no more successful than Buckland in turning Europeans into insect-eaters, this aversion is only widespread in the West. In fact, there's only one thing more uncommon than eating insects: not eating them. Two-thirds of all 1.5 million known animal species are insects. And for 2.5 billion people, especially those in tropical regions, insects have always been a standard element in the local diet.

In parts of the Central African Republic, insects satisfy one-third of the population's protein requirements during the rainy season. Dried caterpillars sell for $14 (€10) a kilogram. And high-end restaurants in Mexico City offer a pricy delicacy called escamoles, a sort of insect caviar made of ant larvae.

People in Thailand use sticks with adhesive on them to hunt dragonflies. In Nepal, they strain bee larvae through a cloth before frying the resulting gooey mass like an egg. And, in Africa, termite mounds are a carefully guarded resource because they have a higher protein content than chicken and their queens can grow to the size of a potato.

Butterflies are also popular fare. During the rainy season in southern Africa -- which is harvest time for the large, bristly caterpillars of the saturniid moth known as mopane worms -- beef prices collapse. In the early 1980s, 1,600 metric tons of mopane were sold in the region each year. And, in Italy, insects are also found in a delicacy called casu marzu, a cheese filled with live larvae.

Even the Bible (Leviticus 11:22) recommends eating locusts. The ancient scholars Herodotus and Pliny the Elder describe how to make flatbread out of mashed crickets. And one Roman gourmet -- Lucullus -- lovingly fatted stag beetles up with wine and bran before roasting them.

Back in Oxford, the chef proudly presents the main course: tacos with feta, fennel and avocado, seasoned with a spicy locust salsa. Fritz Vollrath, a muscular man seemingly well-versed in food matters, bravely digs in. "Delicious," he says, "because you're not crunching on the exoskeleton because it's already been ground up in a food processor."

Vollrath studied in the southwestern German city of Freiburg and now works as a zoologist at Oxford. He snacked on locusts for the first time during an expedition in Panama, where he plucked them directly off charred shrubs after they had been naturally grilled in a brush fire. "Insects are approximately 10 times more eco-friendly than beef," he says. Harvesting them doesn't require deforestation, he explains, but actually helps preserves forests. "Insects offer us an opportunity to rethink and move away from pork and beef," he says.

Indeed, experts believe putting more bugs on our plates could help solve some of humanity's worst problems. The global population increases by 6 million every month, food prices have nearly doubled in the last two years, and meat consumption is threatening forests and drinking water.

"The protein content (of insects) is comparable to that of conventional meat," according to the United Nations' Food and Agricultural Organization (FAO). It goes on to explain that insects are rich in vitamins, minerals and unsaturated fats as well as hardly contaminated by environmental pollutants in many places. "They are often harvested in areas … where no pesticides are used," one FAO report states.

Raising insects can also be seen as a type of development aid. In Thailand, more than 15,000 farmers earn up to $900 (€622) a month by farming locusts. A few hurdles remain, though, before they can be exported across the globe, says Dutch entomologist Arnold van Huis. Some insects do contain traces of pesticides, and some people could have an allergic reaction to their exoskeletons. Together with the FAO, van Huis is researching various possibilities for insect-related food hygiene. He's also planning an insect festival for May, complete with a tasting.

Still, it might be premature to say that "small food" is overtaking "slow food" on consumers' plates. "This is probably not an option for strict vegans," says Karen Duve, author of the bestselling book "Anständig essen" ("Eating Properly"). Even so, she personally finds the idea of insect-based dishes "far more appealing than eating calves, chickens and piglets."

Gourmet food sections in London shops such as Selfridges and Fortnum & Mason now offer tarantulas and scorpions alongside more mundane insects. And a wine shop in Berlin called Weinkeller recommends silkworms or rhinoceros beetles to accompany its Austrian pinot gris.

As the exotic banquet in Oxford comes to its close, chef Thomasina Miers presents her dessert: locusts dipped in salted caramel and dark chocolate. A gaggle of children jostle eagerly for their share.

Though it could have something to do with the mescal, the jury is also enthusiastic. Vollrath still has a cricket leg stuck between his teeth. "How practical," he quips. "The dental floss comes as part of the meal."