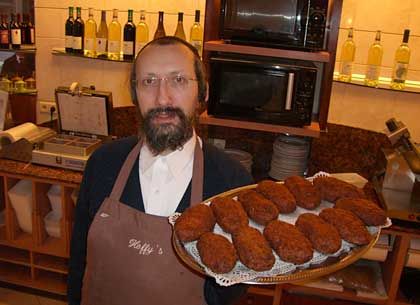 When Jumi Hoffmann, co-owner of "Hoffi's Take Away" in Antwerp's Lange Kievit street, thinks of the future the Belgian city's Jewish community is facing, he doesn't know whether to laugh or cry. He's glad his town is home to the largest orthodox Jewish community in Europe, but he's also worried sick that most of his 20,000 brethren could be drifting into poverty.

"The Yiddish mensch is losing his bread," Hoffmann says. What he means is that Jewish traders have lost their central position in Antwerp's diamond business. They control only a quarter of the turnover made; it used to be 70 percent. And the downward trend continues. Dealers from India now control the market. More than 500 years after the arrival of Spanish and Portuguese Sephardic Jews in Flanders, an era is drawing to a close.

Every year between 1,000 and 2,000 Jews leave Antwerp, due to a lack of jobs. Most leave for Israel and America, some go to Germany. The only reason the community isn't shrinking more quickly is that most families are bigger than others in Belgium.

Jumi Hoffmann has 11 children. Eight are still going to school. Two are being trained as pharmacists and one is studying to become a rabbi. None of them wants to become a diamond dealer. Twenty years ago, some 30,000 orthodox Jews made a living polishing diamonds near the exchange in Hovenier street -- 10 times as many as there are today.

Changing face of the city

The power shift on the city's great diamond market has even changed the menu in the local cafeteria. Most of the items on the menu used to be kosher. Nowaday Jews are as happy to eat curry as Indians are willing to try Pflaumenzimmes, a traditional Jewish dish. It's a bit like in the old Yiddish proverb: When the miller picks a fight with the chimney sweeper, the miller ends up black and the chimney sweeper white. 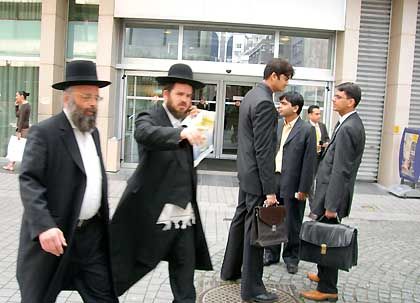 Jews and Indians near the diamond exchange.

The mood among the diamond dealers is not the best. They keep their voices low at work. Agreements are sealed with a handshake, accompanied by an old religious well-wish: masl un broche -- happiness and blessing. The South Asians use the expression too. But Yiddish is slowly losing its status as the main language of the exchange. English does the job just as well.

The High Diamond Council, the trade's main governing body, has only recently caught up with the times. Earlier this month Indians won five of the six elected seats on the 11-member board. Indians already account for €15 billion ($19 billion) of the annual diamond trade of a total of €23 billion.

While competition between them is harsh, the Jews and the Indians -- most of them belonging to the Jain faith -- have a friendly, neighborlike relationship. There are even some Jewish-Indian married couples in Antwerp. "Judaism and our Jainisim have a number of similarities," diamond dealer Ramesh Mehta explains. Like Jews, he says followers of Jainism are used to working hard and they reject every form of violence.

More importantly, both Jews and Indians are used to thinking and acting globally. They also know that they can rely on one another. Far be it from an Indian trader to ask for a receipt when he gives a Jewish colleague a bag of jewels for safekeeping overnight.

Most Indian traders are from the Gujarat region, the center of the Indian diamond trade. They're modest people, who mostly are vegetarian. But when the occasion demands it, they have no problem putting their wealth on show.

Last year, diamond dealer Vijay Shah organized a combined marriage feast for his son and his daughter -- it would have been worthy of a royal family. Insiders estimate he spent €14 million on the bast. And the cricket games arranged every year by one of the large Indian families see each clan trying to outdo the others in terms of pomp and luxury.

But take a look at the Jewish quarter behind Antwerp's Central Station and you can tell it's seen better days. The facades have gone grey, and patches of chewing gum tarnish the walls. Mezuzahs -- capsules featuring quotations from Jewish scripture -- hang from some doorposts and windows. The quotations are thought to guard against temptation, but the city administration prefers putting its faith in video surveillance.

There's some degree of low-key alarm in the basic psychological make-up of many Antwerp residents, even though the city is not particularly dangerous. Flemish Antwerp in many ways resembles Holland's Amsterdam, but it doesn't have the latter's cosmopolitan attitudes.

Fear of militant Islam and of political shifts in the world of diamond trading has had a bizarre effect on Antwerp's political scene. A growing minority of Antwerp Jews sympathizes with Vlaams Belang (or Flemish Interest and formerly known as Vlaams Blok), the most successful extreme right-wing party in Europe, which has held the largest number of seats in the regional parliament of Flanders ever since the 2004 elections. Despite being pro-Flemish and xenophobic, Vlaams Belang presents itself as markedly pro-Israel and demands stronger action be taken against those Moroccan immigrants in Belgium who openly display their contempt for Jews.

Prominent Jews are concerned about the way their Belgian brethren are flirting with the extreme right. Nobel prize winner and Auschwitz survivor Elie Wiesel has called on his Flemish brethren to be more careful in their choice of friends: "No Jew should turn to the extreme right."

Rabbi and lawyer Henri Rosenberg, whose parents also survived the Holocaust, takes a more pragmatic view. When times are hard, it's worth finding unusual allies to promote the interests of the Jewish community, he says. He adds that he can understand why some Jews are seeking ties to Vlaams Belang, whose party chairman Filip Dewinter will probably become Antwerp's new governor.

Antwerp's Jewish community has fiercely defended its monopoly on the actual craftsmanship involved in the diamond trade. The most precious diamonds are still polished in traditional Jewish workshops. "The reason isn't that we have good connections, as many people say," claims Moshe Weiss, the doyen of the trade. "It's that we're better than everyone else."

Weiss and his son Joseph employ 32 diamond polishers. The boss usually helps out with polishing the most expensive diamonds. Right now, Joseph is working on a 52 carat diamond, a rose-colored beauty. "When it comes to large jewels, we're number one. Big is beautiful." But size is relative too. Even large diamonds look tiny when Joseph Weiss holds them in his massive hands.

Thanks to computer technology, the diamond polisher can now make precious stones even more precious. Unpolished diamonds are scanned, weighed, measured and then displayed three-dimensionally on a computer monitor. Weiss can move the virtual diamond around and decide exactly where and how to polish it. It's a matter of extracting the light contained within the stone, he says, that's what makes a diamond come alive.

Staying ahead of the competition

The machine and the software come from Israel. The machine passes the coordinates fixed by Weiss on to the computer-guided diamond polishing machine. Thanks to the machine's precision, diamonds are much smoother today than they used to be. The computer also calculates which diamond shape will produce the least waste -- "drop," "heart," "princess" and "emerald."

Moshe Weiss and his son always have the newest machines. That's why theire diamonds shine more than those of their competitors, and that's why they've been able to defend their leading position on the market. Their customers include the rich and powerful -- kings, stars and companies like Tiffany and Van Cleef & Arpels. 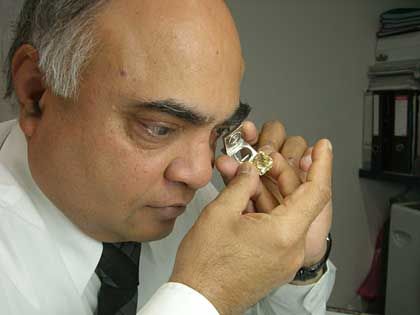 Many of the major Indian dealers also have their diamonds polished by Weiss. "The Jews are five or even ten times as expensive as our polishers in Bombay, but they're better too," says Ahwin Jahwery, president of the wholesale trader Diabelge. It's a simple calculation. High carat diamonds don't require as much labor as several small ones. A large stone can easily sell for €100,000 more just by investing an extra €5,000 into the polishing process rather than just €1,000.

Jahwery doesn't take as bleak a view of the Jewish diamond traders than they do themselves. He says they're always going to make a profit as long as their craftsmanship is superior to that of their Indian competitors. Of course, that's only a small part of the business here in Antwerp. Smaller stones, which require more polishing, are typically polished in India, where labor costs are much lower.

Putting up a fight

Jahwery says the Jewish traders need more fighting spirit. "They complain too much, and they forget that when the wind blows you have to build a windmill, not run for cover," he says.

Jahwery comes from the city of Palanpur in Gujarat, where his great grandfather still polished diamonds on a pedal-driven wheel. Many of the great diamond dealers of Antwerp have roots in Palanpur: the Mehtas, the Shahs, the Jahwerys. They came to Antwerp in the 1970s and 1980s, attracted by the enormous profits possible there, and also by Belgium's liberal immigration laws. Since diamond dealers tend to marry among each other, most of the 300 Indian families of Antwerp are related.

A business largely controlled by your own family is always far superior to competitors, Jahwery says. The other diamond dealers from Gujarat would probably agree. They rely on their worldwide family networks to build and maintain headquarters on every continent. That's what distinguishes them from the Jewish businesses that used to dominate the market. The Indian clans are true global players.

Ashwin Jahwery has branches in Taiwan, Thailand, China, Australia, Great Britain and Spain, all of them run by his nephews. His two sons are still studying at Antwerp University. One of them is studying business and the other diamond polishing. They already have positions waiting for them in their father's diamond trade empire.

And unlike the Jewish community, the Indians aren't sentimental about Antwerp. They lead a pleasant life there and earn well, but they could leave anytime.

A good businessman has to be flexible, Jahwery says -- and that flexibility has to be thought of in global terms. What he says amounts to a threat. "If the Belgian government creates problems for us," he says, "then Antwerp has no future as a business location. The things I need to get started somewhere else in the world fit inside two suitcases."

Some of his compatriots have already followed the call of one of the diamond trade's rising new locations and moved to Dubai. Diamond dealers in Antwerp feel harassed by a number of new regulations introduced by the Belgian government in order to combat the trade in so-called "blood diamonds." Antwerp not only has the largest regular market for diamonds in the world; it also has the largest black market. It's here that dictators and rebels sell the diamonds by which they finance their devastating civil wars.

The price of a diamond is determined on the basis of the four Cs: cut, color, clarity and carats. The High Diamond Council, which has also developed a code of conduct for its members, has added a fifth C: confidence.

It was a nice gesture, but it hasn't made a difference in practical terms. People at the jewelry shops near the Central Station don't ask for a certificate when someone offers them a bag of raw diamonds.

The High Council claims the problem is under control -- but that's wishful thinking, not a reality. There's no way to effectively control the import and export of diamonds -- for the simple reason that they're so small. And a pocketful of jewels is enough to allow an African warlord to buy enough Kalashnikovs for a whole army.

When Antwerp's diamond market was still controlled by Jewish families, the cartel relied on self-control. But those times are over.