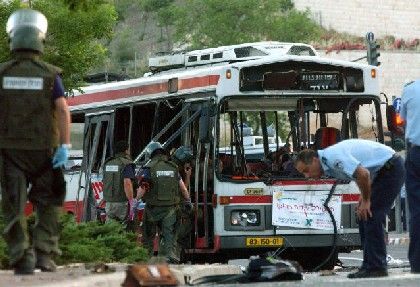 Palestinian suicide bomber Bassam Takruri killed seven people when he blew himself up on a Jersualem bus on May 18, 2003. His family then received $200 a month for over a year, after opening an Arab Bank account.

On the morning of the day before he planned to blow himself up, Bassam Takruri wore a freshly ironed shirt, a blazer and polished shoes. At 10 a.m., the student said goodbye to his father, who gave him ten shekels in pocket money. It was a beautiful Saturday in May in the Palestinian town of Hebron.

Everything seemed normal, at least for the rest of the family. The 18-year-old Bassam, a boy with dark, earnest eyes, was ambitious. He wanted to become an engineer. His father called him his best son. But he spent the last night of his life away from this family -- something many suicide bombers do so as not to lose their nerve at the last moment.

On the Sunday morning of the day Bassam picked for his terror attack, Steve Averbach strapped on his pistol in a Jerusalem suburb just as he had been doing for years. Averbach was a police officer. It was early, not even 6 a.m. and his two small sons Sean and Adam and his wife Julie were still sleeping. At a stop in the northern part of Jerusalem, he boarded the No. 6 bus, a green accordion-stretch model. At around 5:45 a.m. it reached the stop at French Hill.

Averbach scrutinized each new passenger. After serving in the anti-terrorist unit of the Jerusalem police department, he was now teaching the police, civilians and private security how to handle a weapon. His colleagues even called him "Weapon Steve."

As the bus began to pull away, a man ran up to the side and the bus driver stopped and opened the door. The man was wearing the black suit and skullcap of an observant Jew. But his beard was too thin. Seeing a bulge underneath the man's jacket, Averbach quickly stood up and headed toward the stranger. But Bassam, disguised as a devout Jew, was quicker than Averbach and he ignited his belt of explosives.

A few weeks after the suicide bombing, the phone at the home of Bassam Takruri's parents rang. On the other end of the line was a representative of Muassafat Usar al Shuhada, or "The Organization of Martyr Families." He told Bassam's mother that the family had received money, but that they would have to open an account at the Arab Bank in order to withdraw the first deposit. The Takruris were puzzled, but they did what the man said. Shortly thereafter money was transferred to the new account. From then on, Bassam's family received $200 (€152) each month for more than a year.

The Arab Bank is one of the largest and most important financial institutions in the Arab world. The Jordan-based private bank, of which 40 percent is still held by the founding Schuman family, is active in 28 countries. The Jordanian monarchy even awarded Abd al Hamid Schuman a medal for his achievements and services to the country.

But the bank has long been suspected of directing money used to finance terrorism in the Palestinian Territories. And accounts at its Palestinian branches are also supposedly used to pay a type of life insurance to the families of youthful suicide bombers, who blow themselves up with the aim of killing as many Israelis as possible. The blood money paid for a son turned murderer is 20,000 Saudi riyal -- roughly €4,000 or $5,000. The funds take a circuitous route to the accounts of those families that prove the death of their son by showing a death certificate at the Arab Bank branch in the Palestinian Territories. Then monthly deposits are made just like in Takruri's case.

Suicide bombers with foresight can take care of all the necessary paperwork before they blow themselves to smithereens. A so-called Martyr Kit includes everything from a death certificate from the Palestinian Authority to an account card at the Arab Bank.

The attack carried out by the student Bassam Takruri on May 18, 2003 was one of the worst at the time. He had several kilograms of explosives strapped around his waist and the power or the blast was so strong that the bus was catapulted from the street. Seven people died and 20 were injured.

As the police found Steve Averbach's body inside the bus, his finger was still on the trigger of his pistol. He told them they should be careful since the weapon's safety was off. Then he lost consciousness. He spent five weeks in intensive care. Shards of glass had punctured his lungs and a ball bearing had penetrated his neck to become lodged between his third and fourth vertebrae. Since that day, Averbach has been paralyzed from the neck down.

A year after the attack he got himself an attorney, an American named Gary Osen from New Jersey. He now wants to sue the Arab Bank on the basis of a 1996 anti-terrorism law making it illegal to support terrorists financially. The 37-year-old Osen has a neat haircut, a sonorous voice, a sober demeanor -- and plenty of experience in damage compensation cases. In Germany, he represented the heirs of the Wertheim family against major retailer KarstadtQuelle. "In our suit we accuse the Arab Bank of supporting the funding of extremist Palestinian groups," says Osen. "Our goal is to make it much more difficult for them to access the money."

His law office represents 200 US clients who lost relatives in Israel in terrorist attacks. The law firm of US star attorney Ron Motley, who led a class-action lawsuit for the families of the victims of the Sept. 11, 2001 attacks, is representing another 700 people seeking compensation. The lawyers are optimistic they can at least reduce the flow of money coming predominately from Saudi Arabia via Arab Bank accounts into the Palestinian Territories.

According to the lawsuit complaint, the blood money was often collected in Saudi Arabia and then sent via the Arab Bank's New York branch in US dollars to either the Gaza Strip or the West Bank. Much financial support is thought to come from the Saudi Committee for the Al-Quds Intifada, a charity headed by Saudi Interior Minster Prince Nayef. "This committee," says Osen, "is nothing more than a fundraising organization to support the Palestinian resistance." But a spokesman for the group in the Saudi capital Riyadh denies supporting the families of suicide bombers, claiming the committee only works with official Palestinian organizations and ministries.

But an ad published in the Palestinian daily newspaper Al Quds in November 2001 supports the theory of the US attorneys. The committee placed an advertisement listing the names of injured and imprisoned Palestinians, as well as the names of a few suicide bombers. Their families were instructed to go to a local branch of the Arab Bank in order to receive donations from the committee.

In February 2002, a similar ad was placed in another publication, Al Hayat Al Jadeeda, again asking families of "martyrs" to go to the Arab Bank in order "to receive the tenth payment, totaling $5,316 for each family, donated by the Saudi committee." The generous donors ended up giving $1,594,980 to some 300 families in the occupied territories via the Arab Bank.

Representatives of the financial institution deny that the bank knowingly takes part in such transactions. "Our bank has nothing to do with terror financing," says Bob Chlopak, the Arab Bank's spokesman in the United States. "But a bank isn't a law-enforcement agency. It can't google every single one of its clients before they make a transfer. And no bank is perfect."

Apparently not the Arab Bank either, which had its New York branch on Madison Avenue essentially shut down by the US banking authorities for not having sufficient internal controls on money transfers. In 2005, a unit of the US Treasury Department also slapped a $24 million fine on the bank, which can no longer carry out dollar-denominated transactions and international transfers.

The Israeli army also found documents during searches in the West Bank years ago that allegedly substantiate charges that the Arab Bank has been used by Saudi organizations to finance terrorism. Funds supposedly were transferred to both Hamas and Islamic Jihad. Confiscated Arab Bank documents from 2003 intimate that fund transfers via the New York branch ended up with the Tulkarm Charitable Society, which has ties to Hamas.

The 40-year-old bombing survivor Steve Averbach now lives in Ganei Tikva, "the garden of hope," in a quiet street in a quiet suburb of Tel Aviv. In front of his house is a silver van with a blue wheelchair sticker on the back window. Averbach now needs care 24 hours a day. He can't talk on the telephone without help, nor can he feed himself. He can speak, nod his head, laugh and cry. When he cries his caregiver has to wipe away his tears. Every day he has to swallow 40 different pills and his body slumps in his wheelchair.

"I'm not the victim of terrorism," says Averbach looking at his wife Julie. "The victims are my wife and my children." Julie quit her job as an accountant and the Averbachs are living on his meager police pension. If his lawsuit against the Arab Bank is successful he could end up getting a few million dollars in three or four years.

The father of the bomber lives in the Ras al Jura part of Hebron. Jamal Takruri sits on his yellow sofa, a small man with a friendly face. Behind him on the wall hangs a photograph of his son Bassam. The likeness is unmistakable -- the big eyes, the high forehead, the bushy eyebrows. Since their son blew himself up, the family has been living in a small apartment. Israeli bulldozers flattened their house a few weeks after the attack. The apartment that is now their home belongs to the Organization of Martyr Families -- the very group that suddenly offered them the generous financial payments.

Bassam's father has never questioned whether he should accept the funds sent to his Arab Bank account. "We needed the money," he says lighting up a smoke. "We suddenly no longer had a house."