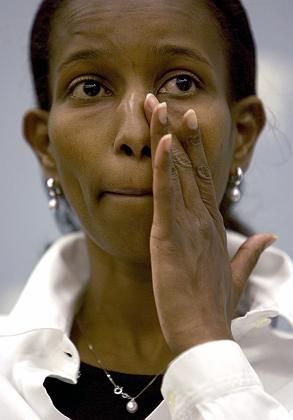 Ayaan Hirsi Ali is leaving the Netherlands for the United States.

She apologizes for the mess in her apartment. But it's a mess that says volumes about her life. Still to be unwrapped bouquets, complete with messages of support, are strewn everywhere. A treadmill stands in the center of the room -- running in the nearby park would be way too risky. Newspapers lie scattered across the glazed white desk, her portrait on the front pages. She looks spiteful, with a touch of fear and anger in her eyes.

"I never really got a chance to settle down," says Ayaan Hirsi Ali as she steps into the small kitchen, "and yet I felt very much at home here." Now, though, the luxury apartment high above the roofs of The Hague -- her refuge from the death threats of Islamic fundamentalists -- has become foreign to her. The neighbors have sued her out of the building because they were tired of dealing with the security detail assigned to protect Hirsi Ali from attack. Even worse, the Dutch Minister of Immigration and Integration, Rita Verdonk, stripped her of her citizenship early last week, citing minor lies on Ali's citizenship application. A chapter in Hirsi Ali's life -- and an era in Dutch politics -- has come to an end.

Before the controversy surrounding her citizenship application broke out, 36-year-old Hirsi Ali, whose real surname is Magan, had seemed strangely distracted. Her popularity had dwindled and many left-wing intellectuals, her former admirers, turned their backs on her.

But when the idiosyncratic and controversial young politician announced that she was leaving the Netherlands, her former resoluteness seemed to return immediately. Now the Somalian-born politician is leaving Holland for the United States.

She has accepted a fellowship from the neo-conservative American Enterprise Institute (AEI), the famous think tank which vociferously advocated regime change in Iraq and the exportation of democracy to the Middle East. She's planning on using the fellowship to write a book providing possible guidelines for the opening up of Islam. The book's working title is "Shortcut to Enlightenment" and she sent the proposal to Christopher DeMuth, president of the American Enterprise Institute months ago.

Hirsi Ali isn't intending to produce a dry, analytical work intended for experts. Rather, it's supposed to be readable -- gripping. "I'm going to resurrect the Prophet Muhammad in the New York Public Library," Hirsi Ali says with sparkling eyes. "There he's going to meet three great enlightenment thinkers" -- Karl Popper, the philosopher of open society, John Stuart Mill, the author of On Liberty, and Friedrich August von Hayek, the economist who argued against the welfare state and in favor of the free market.

In the book, the Prophet and the Western philosophers will engage in a struggle of ideas. Hirsi Ali wants to reach both Arab dissident intellectuals and scholars in other parts of the world who call for the modernization and liberalization of Islamic societies.

Hirsi Ali speaks quickly and self-assuredly, suddenly excited by the prospect of departure. "European intellectuals will hate me for accepting an AEI scholarship," she says. "But Europe's politicians of appeasement already hate me anyway."

Despite the American Enterprise's reputation, it is by no means the war-mongering, America first vanguard of the Republican Party people think it is, Hirsi Ali says. "The AEI brings together people with different viewpoints and allows them to openly discuss their opinions," she explains. "In Europe, on the other hand, intellectuals avoid those with different viewpoints." She says she told the AEI's selection committee that she has a "big mouth," likes to talk back, and is also an atheist. She even got permission to work on "Submission II" -- the sequel to the film directed by Theo Van Gogh, which got him murdered by an Islamic fundamentalist. "Submission II" will be about Islam's relationship to homosexuality, among other things. No problem, she was told.

Points of agreement between Ali and the AEI aren't hard to find, especially when it comes to questions such as that whether or not a preventive strike against Iran is justified. On this point, Ali accuses Europe of weakness. "We're faced with a simple choice," she says. "Either we go to war against (Iranian) President (Mahmoud) Ahmadinejad before he has the atom bomb, or we go to war with Ahmadinejad after he's obtained the bomb. But no one in Europe seems to understand that."

Sound simple enough, perhaps. But even the neo-cons -- and the American Enterprise Institute -- have been shying away from their pre-Iraq bellicosity. America's global mission is no longer quite so clear.

Hirsi Ali's secretary walks nervously into the kitchen. The lawyers have arrived, she says. Hirsi Ali seems upset -- she doesn't want to interrupt her survey of the world's political challenges in order to deal with the tedious details of Dutch immigration law.

Was she pleased to read the comparison to Anne Frank that some foreign newspapers suggested? She smiles, looking embarrassed and a little flattered. Then her voice takes on its characteristic toughness as she offers one of her feared rhetorical uppercuts: "This country still hasn't come to terms with World War II."

A moment later, she walks over to the lawyers, smiling and with an outstretched hand.