The three tourists, two men and one woman, looked inconspicuous enough as they boarded a Baltic steamship -- the "Adler-Dania" -- last Tuesday. They'd come looking for duty-free schnapps and cigarettes, apparently, just like the other passengers. But as the boat entered Polish territorial waters near the town of Swinoujscie, they revealed themselves to be Polish customs offices, and announced they would carry out a raid as soon as they reached the port.

Captain Heinz Arendt, 63, responded by turning the ship around and heading back for Germany. The customs officers called the Polish coast guard, and two speedboats tried to block the Adler Danias path. The Poles fired green flares; eyewitnesses even report that pistol shots were fired. But Captain Arendt held his course. The duty-free trip reached the German port of Heringsdorf with the customs officers still on board.

Smuggled goods, boat chases, shots fired -- it all sounds like a thriller set off the Horn of Africa rather than a day on the water within the European Union. But conditions between Germany and Poland deteriorated even further last week when Polish newspapers mentioned "machine-gun fire" and "kidnapping." Politicians in Berlin and Warsaw warned against giving the incident a political spin, saying that tense relations between the neighboring countries shouldnt be made worse because of a few cigarettes and a couple of bottles of vodka.

The caution was necessary. German-Polish relations are showing serious signs of strain, 16 years after the fall of Communism. Next week Polish Prime Minister Jaroslaw Kaczynski will visit Berlin, and his German hosts hope the visit will set things on a friendlier footing. But a lot is at stake.

A cold wind from the east

The last decade and a half has been one of the friendliest eras in the dark and often bitter relationship between Germans and Slavs, which stretches back over a thousand years. But Germany has started to feel a cold wind blowing from the East ever since the Kaczynski twins moved into office -- Lech in the presidential palace in Warsaw, and Jaroslaw as prime minister in government headquarters on Aleje Ujazdowski.

No other western European state did more to help Poland join the EU, but the new rulers on the Vistula seem intent on provoking Germany, using every historical reference available, no matter how absurd. Defense Minister Radoslaw Sikorski has compared an agreement to build a Russian-German pipeline through the Baltic Sea to the Hitler-Stalin pact; a recent summit meeting was cancelled by the Polish prime minister because he was ridiculed in a cheeky German daily. Most of all, the dark accusation of historical revisionism is regularly trundled out.

The year-old government in Warsaw finds it highly worrying when Germany's president, Horst Köhler, speaks before Germans who were expelled from former German territories after World War II -- something every one of his predecessors has done. Shortly after the head of the German Federation of Expellees, Erika Steinbach, opened an exhibition on displaced Europeans in Berlin last August, Prime Minister Kaczynski travelled to the former concentration camp of Stutthof near Gdansk. It had to be clear, he said, who were the "victims and who were the perpetrators" during the World War II -- as if this had ever been open to question.

There is no doubt that Lech and Jaroslaw Kaczynski, whose father fought the Nazis in the Warsaw uprising in August 1944, are on a national mission. They believe Poland has been too subservient to the West for too long -- in particular to Germans. Poland, of course, has been partitioned, attacked, cheated and ravaged; it has fought back invaders for centuries. The country has also saved Western Europe frequently from hordes from the East. Now the Kaczynskis want Poland's 38 million citizens to take their due place in the European community; they want to be treated with the respect their history deserves. These run-ins with a neighboring country bucks up Polish pride. Germans, after all, have brought it on themselves, according to the Kaczynskis. 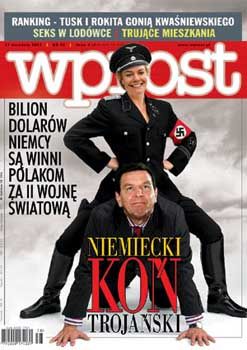 Erika Steinbach on the back of then-Chancellor Schröder, as depicted by a Polish magazine: "If she didnt exist, wed have to invent her."

In the Warsaw Uprising Museum, a pipe measuring barely 1.4 meters across is on display. Polish underground resistance fighters had to crawl through this pipe while they tried to reclaim their city in 1944. The memorial center was set up by Lech Kaczynski two years ago, when he was mayor of Warsaw.

It's the twins' most important politico-historical project. Visitors can choose whether to crawl through the 33-meter long reconstructed drain in subdued lighting, or, as in 1944, in complete darkness. The exhibit is impossible for those suffering from claustrophobia. The air is stuffy and visitors have to grope their way forward.

"We want to remind people of Polands heroic past in order to keep our society closely knit," says the museums deputy director Dariusz Gawin. Polish resistance fighters in Warsaw battled the Nazis for three months before they surrendered, having been abandoned by Stalin and the Western powers. Hitlers henchmen then depopulated the city and razed it almost completely.

Gawin, wearing jeans and a blazer jacket, is no fossilized nationalist, but a doctor of philosophy who enjoys a good argument. "We need the nation to stick together in order to build up a social state," he says. The time has come for a new spiritual and moral beginning, he says. And many conservatives in Poland believe the post-Communist era -- with its old networks and new profiteers -- needs to go. The Kaczynskis have set themselves up as the biggest proponents of this movement.

After the fall of Communism, former dissidents were the ones who steered the country toward capitalism and democracy. The Communists got off scot-free and the countrys new leadership developed a system based on corruption and paternalism, supported in part by the former dissidents. The corruption was typified by a scandal surrounding Lew Rywin, a movie producer famous for a recent World War II-era drama, "The Pianist." The revelations damaged almost all of Warsaw's political elite, including the editor and former dissident Adam Michnik. Michnik, for more than 10 years, had been an uncontested emblem of Poland's emergence from Communism -- like his newspaper Gazeta Wyborcza. He liked to campaign for reconciliation with Germany.

Lech and Jaroslaw Kaczynski, on the other hand, have made full use of the scandal. As early as the 1990s they started calling for Communists to be made accountable -- which is why they were isolated politically by Lech Walesa -- but a new generation of conservatives has managed to profit from the defeat of the Gazeta camp. The Warsaw magazine Wprost led the anti-German assault in the media with a sensational cover three years ago. The ordinarily liberal-minded publication showed a picture of Erika Steinbach dressed as a dominatrix in a Nazi uniform, riding on the back of then-Chancellor Gerhard Schröder.

Steinbach, if you believe the newspapers, remains Polands biggest enemy. "She serves as proof that the Germans are still evil," says the author Pawel Huelle from Gdansk. "If she didnt exist, wed have to invent her."

The new Polish right has dealt a blow to German-Polish relations after four decades of steady improvement. In 1965 Polish bishops wrote to the German bishopric with the words: "We forgive and ask for forgiveness." In 1970 Willy Brandt knelt in front a Warsaw memorial to the uprising in the Jewish ghetto. Nineteen years later, in Kreisau, chancellor Helmut Kohl and Tadeusz Mazowiecki, Polands first non-Communist prime minister, embraced each other. Since then, the network of economic relations has been growing and private and official contacts have grown closer all the time.

But Polands old inferiority complexes haven't vanished with a return to the West. "We Poles are of the opinion that we have always fought on the side of freedom but that we have never been rewarded for it," says philosopher Dariusz Gawin. But things will have to change, he believes. "Poland is too big to play in the second league, and too small to keep up with the first league."

There are doubts both in Berlin and Brussels whether the Kaczynski twins will really manage to pull off such a balancing act. Kai-Olaf Lang, Poland specialist at the German Institute for International and Security Affairs in Berlin, believes that the conservative government is showing an astonishing lack of direction in foreign policy. He doubts the Kaczynskis have actively decided to clash with their western EU partners. He describes Polands foreign policy as "more of a will o the wisp European policy with nationalist rhetoric."

Warsaw would do well to improve relations with Berlin. Germany, after all, will soon take over the chairmanship of the EU Council. "Im afraid we are missing our chance," says one high-ranking official in Kaczynskis party, the PiS.

Until now, though, the Kaczynskis have been so taken up with coalition strife and internal rows that they havent had time to develop a well-thought-out foreign policy. In the meantime, not even friends of the twins will dare to come up with a constructive policy of reform, which is why picking on Germany as a common enemy will be popular for a while to come. "Unstable governments need an internal or external enemy in order to stay united," says one Warsaw government insider.

Keeping up the anti-German rhetoric could well turn out to be risky: Surveys have show again and again that Germans have a surprisingly positive image in Poland. The vast majority of Poles still believe that Germany is Polands most important partner. In June, four out of five of those asked said they believed reconciliation between the two peoples was still possible -- while in 1990 fewer than 50 percent of Poles held the same opinion.