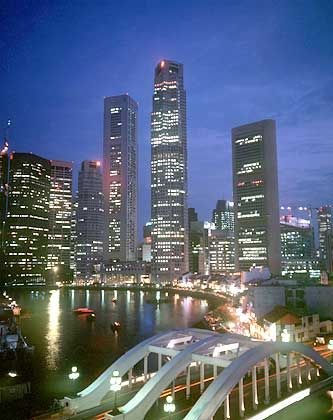 Singapore is an up and coming hotspot for scientists

Philip Yeo would prefer to be surrounded by glass walls all day long. "Then I could just write any idea that happens to pop into my head straight onto the wall," says the short, slim Asian, as he scribbles his most recent thoughts onto a glass panel with a magic marker.

"As far as I'm concerned, they should have these panels everywhere," says Yeo, head of A*Star, Singapore's national scientific research agency. "We can always use more creativity here."

A few years ago, Yeo drew up a bold plan on one of his glass panels: a giant biotech center. The design envisaged a network of buildings connected by pedestrian bridges -- double lines on Yeo's drawing. Construction began only a few months later.

Building on the center, which is called Biopolis, started last year. "A one-of-a-kind project worldwide," says Yeo, clearly pleased with himself and his creation.

Meanwhile, about 2,000 molecular biologists, geneticists, nano-researchers, bioinformatics experts and medical researchers work in the center. Its sharply angled buildings were designed by the Britain-based Iraqi star architect Zaha Hadid. In actual fact, the buildings' angular shapes clash with the principles of traditional Chinese spirit worship. But the people Yeo is looking to attract have little concern for such superstitions. With state-of-the-art laboratory technology, an environment devoid of ethical watchdogs and, most importantly, plenty of research funding, he is attracting some of the West's leading biotechnology experts to this authoritarian island nation.

Yeo is constantly on the lookout for new talent. His office is filled with stacks of articles from Nature, Science and other leading scientific journals. The authors' names are highlighted, clearly an indication that he has already picked out his next ideal candidates. "Some people collect butterflies. I collect scientists," says Yeo, who likes to walk around his carpeted office without shoes.

One of his biggest catches is the German-born Axel Ullrich, a cancer researcher from the Max Planck Institute for Biochemistry, a man seemingly tailor-made for Yeo's needs. Ullrich is well-known among molecular biologists because he was one of the first to translate some of his profession's grand promises into medical practice.

He discovered a certain type of receptor on the outer shell of breast cancer cells. This fundamental discovery led to the development of the drug Herceptin, now a standard medication used to treat this form of cancer. And soon the world's largest pharmaceutical group, Pfizer, will launch a substance -- currently known under its laboratory name, SU11248 -- for treatment of renal and stomach cancer. The substance was developed by a firm founded by Ullrich.

Yeo has nothing but praise for Ullrich, calling him "a first-class guy who can translate basic research into marketable applications."

This is precisely what Yeo's superiors want him to do. Singapore's government hopes to use biotechnology to give the island state the kind of boost in prosperity it experienced in the seventies and eighties with its electronics and computer industry. For decades, mass-produced products were manufactured in Singapore and sold throughout the rest of the world.

Meanwhile, however, these products are being produced more cheaply in China and Malaysia. For this reason, Singapore's latest export wonder will be the product of brainpower, not manual labor. "We are developing biotech into the next pillar of our prosperity," says Yeo. The relationship between the international scientific jet-set and Singapore's ambitious leaders is perfectly symbiotic, with each side giving the other something it could not achieve on its own. Axel Ullrich, for example, received at least 5 million in funding for his Singapore Onco Genome Laboratory, as well as fast machines and well-trained employees. After all, intellect and instinct alone are not enough to keep his research afloat; he also needs hard-working employees and the right facilities. "We analyze in particular the genetic information in cancer cells and search for activated genes that are somehow related to uncontrolled growth," says the 61-year-old German researcher.

His research also requires detailed analyses of genetic material, a task handled in part by robots. Ullrich is excited about the possibilities in Singapore where, he says, "we were suddenly given ten times as much capacity as we have at home." But he also needs highly skilled workers to prepare samples for analysis. "It's really hard work," says Ullrich, who took a one-year sabbatical from his position at the Max Planck Institute to head up the Singapore outfit.

Ullrich has already learned a thing or two about hard work from his slim Asian employees. But because he has a few more pounds on his frame to move around, as he rushes from a downtown conference to Biopolis, he quickly begins to sweat in Singapore's humid tropical climate. He's visibly relieved when he finally arrives. Biopolis' air-conditioned environment is the perfect place to allow clear thoughts to develop and flourish. From his office on the eighth floor, Ullrich has a view of the busy commercial center's skyline. 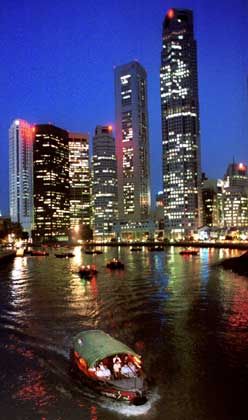 "This city is run like a company," says Ullrich, who already sensed what he calls an "unconditional will to succeed" during his first meetings with the senior government officials in charge of the project. Singapore has set up a nirvana for researchers on a small hill not far from the national university. The site's landscaping includes pool after pool filled with tens of thousands of zebra fish, as well as a basement level, under the underground parking garage, devoted entirely to plastic cages containing some 250,000 laboratory mice.

There are few legal restrictions. For example, researchers in Singapore have already obtained six stem cell lines from human embryos, something that would be prohibited in Germany. "We just happen to be more pragmatic here," says Yeo. He says that Singapore is a multitheistic state where Buddhists, Taoists, Christians and Muslims are able to live in harmony because no one insists that his religious convictions are absolute.

Yeo sounds almost reverent when he talks about Alan Colman, whose firm, ES Cell International, may be interested in moving into Biopolis. Colman, together with "Dolly" creator Ian Wilmut, produces genetically manipulated cloned sheep, and finds the research climate at Biopolis "exceptionally pleasant."

But there is one rare species in Singapore: local scientists. That's because Singaporean students have traditionally seen engineering subjects, like computer engineering and electrical engineering, as the most likely to lead to promising careers. As a result, the country's research organizations are forced to use financial incentives to attract foreign researchers. The incentives are so appealing that Ullrich brought along four German colleagues to work with him on this treasure island for elite researchers.

The Singaporeans were also successful with Anne Bendt. Her short blonde hair really stands out among a sea of black-haired heads milling about in Biopolis' cafeteria section at lunchtime. The walls of the modern, self-service cafeteria for researchers are stylishly paneled in dark wenge wood. One counter offers steaming Chinese noodle soup, while Malaysian-style fish steamed in banana leaves can be ordered at another.

"Asian researchers are still too conformist"

Bendt selects a lunch of fresh vegetables in hot broth. "I like to eat light meals, so that the heat doesn't take too much of a toll on me," she explains. After lunch, she'll have to sprint to Novartis' research center in the Chromos building to pick up tuberculosis pathogen and quickly take it to her laboratory at the University of Singapore, where she is analyzing the pathogen's lipid shell. The protective shell is so thick that it prevents the immune system's carrier cells from killing the pathogen. This allows the pathogen to penetrate into the cell, where it can remain dormant for years.

Bendt is what's called a "post-doc," someone who has just received her doctorate and is now spending time in a contract position after having completed her thesis. "I could also have gone to the United States, but I decided to go to Asia instead," she says, vigorously adding: "Things are really happening here right now."

Her sponsor, Swiss biophysicist Markus Wenk, is a leading authority in the field of lipid research. He came to the island from prestigious Yale University. "In the West", he says, "the structures are set in stone and the professors established. But here there is a sense of dynamics and change." Wenk is clearly a convert: "From a global perspective, everything in science is shifting to the East."

US and European government officials who deal with the scientific world have reached the same conclusion. A study completed last year by the National Science Foundation, for example, came as a wake-up call to the US academic community. The New York Times wrote that "the United States is losing its dominant position in the sciences", citing as evidence the decline in scientific publications originating in the United States -- as opposed to a steady increase in publications authored by Asian researchers.

In September 2004, a delegation of British scientists returned, deeply impressed, from what they called a "consciousness-expanding" tour of Asia's stem cell laboratories. "The researchers in China, Singapore and South Korea are just as talented as their counterparts in Great Britain. However, they are also better equipped financially and technically," the Britons wrote in their final report.

However, the British researchers faulted Singapore for its high percentage of scientists imported from the West, noting that "it remains to be seen whether the country's investments will pay off."

To address this problem, local officials plan to attract more local talent to the University of Singapore, hoping that the Western guest researchers' more open-minded approach to research will rub off on local youth.

This intellectual approach is not especially surprising in a country that almost exclusively expects unconditional performance. As an example of the local mindset, the future salary of a Singaporean worker depends in part on his or her grades in school.

Daily life is also colored by an authoritarian way of thinking. Granted, chewing gum is now available for sale in Singapore, albeit in pharmacies only. But even at Biopolis, there are large signs posted at each exit to remind people that consuming beverages outside is prohibited.

The grounds, like many parts of the city, fit the Singaporean cliché and seem almost antiseptic, especially when compared with other Asian cities. Even a fluttering handkerchief is enough to attract attention.

When she's not at work, Anne Bendt has already learned to adapt her behavior to local customs. During the weekends, she goes out on Dragon Boat with other Germans. And instead of hanging out in trendy Cologne clubs, she now spends her evenings lounging on the deck at the Indochine Bar.

One thing Bendt can really appreciate is the Asian fascination for German culture. Although the Indochine Bar doesn't serve Kölsch, a type of beer brewed in her native Cologne, at least it has Paulaner Beer on tap. "They brew it in their own brewery here in Singapore, and they even deliver it in kegs," she says.