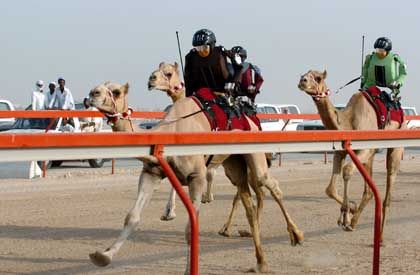 Spectators cheer on robot camel jockeys during a race at Al Shahaniyya Camel Racecourse on the outskirts of Doha.

It's 45 degrees Celsius (113 degrees Fahrenheit) here in the desert outside Doha, Qatar's capital, and the air shimmers above the over-heated sand. From a distance, the city looks like a futuristic Fata Morgana. Far away, a dromedary camel gallops at full-speed across the racetrack. Today, though, instead of a human jockey, the beast is being driven by a robot, a whip-wielding, rein-pulling and horn-honking mechanical jockey.

"Three kilometers in five minutes thirteen seconds -- not bad," says Rashid Ali Ibrahim, adjusting his Gutra head scarf, as the camel crosses the finish line, foam streaming from its mouth. Camel owners and tourists alike stand on the sidelines, gaping at this new-fangled contraption and taking pictures with their cell phones.

Rashid Ali Ibrahim is pleased. As the technical manager of the experiment, he has the blessing of the King of Qatar, who sees the steel-and-plastic jockey as a harbinger of the future of his country. 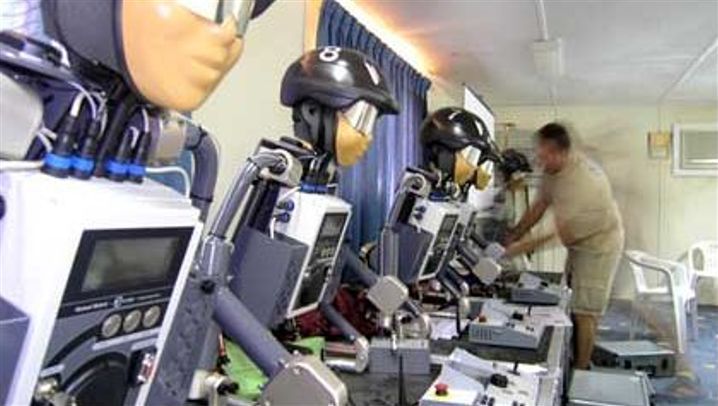 Camel Racing: Robots Jockey for Position in the Desert

For years, human rights organizations have been critical of the abusive practice of using child slaves as jockeys in these camel races. Of course, the kids have built in advantages here: they're light, cheap and have shrill voices that are ideal for driving the camels. They have been so useful that children -- some as young as four -- have been smuggled into Qatar from Sudan or Pakistan and perilously strapped to the backs of camels. In protest of this practice, US Secretary of State Condoleezza Rice threatened the tiny gulf state with sanctions if it didn't stop this form of child slavery.

As such, Sheikh Hamad, the small country's ruler, suddenly found himself under pressure to act. The sheikh came into power in 1995, after overthrowing his father while the older man was vacationing in Europe. He took a similarly surprising and decisive approach to the camel jockey problem by enacting "Law Number 22" this May. Under the new law, anyone caught using underage jockeys can face between three and 10 years in prison.

But doing away with child labor is only half of his plan. "Qatar will need more than oil and natural gas in the future," says Ibrahim, sitting at his desk in an office building adjacent to the track, where four air-conditioners work to keep the room a manageable 30°C (86°F). "The robot jockey is a symbol of our future."

Riding a camel with a joystick

Ibrahim plans to have 50 robot jockeys ready for action by the start of the camel racing season on October 6, and expects to up that number to 120 by the end of the year. The foundation for a new "Robot Jockey Center" is just being poured behind the office building. "Our robots are also suitable for export," says Ibrahim.

"Rashid?" someone calls from behind a sliding door. "Are we ready to do your test?" He steps into his research team's inner sanctum, where three Swiss engineers wearing shorts and polo shirts sit in front of their creations.

Developing these robot jockeys cost more than a million euros -- a modest sum for the state of Qatar, which has close to the world's highest per capita income levels. Before the robot project reaches its final inspection stage, Ibrahim, the man in charge of the operation, wants to learn how to ride a camel via remote control.

Ibrahim takes a small grey box that looks like the remote control unit for a model airplane onto his lap. The box has a few control knobs, buttons and a joystick. "What do you do before you start?" the camel driving instructor asks. Ibrahim turns the ignition key. The wireless connection is established and the steel camel jockey crackles quietly. "Whip the camel in the back," says one of the Swiss engineers. As Ibrahim pulls on the joystick with his thumb and index finger, the robot's right arm moves backward and cracks a whip against the box on which it is mounted. Then the trainee rotates the whip one more time, honks, and restarts the computer. Two minutes later he is awarded with his "Robotic Camel Jockey Trainer Certificate."

There are seven more tests before lunch, when the trainees -- buoyant after the morning's successful activities -- wolf down their meals with their hands. The three Swiss engineers prefer to take their lunch -- Coke and candy bars -- in the next room.

"The differences in mentality are tremendous," says Alexandre Colot in French. The powerfully-built, sunburned engineer comes from a town near Geneva, in a part of Switzerland especially known for its sense of order. Colot, 27, runs the Swiss end of the robot development project. To write his doctoral thesis, he placed miniature robots into a colony of cockroaches to see how they would interact. Then he worked for the upscale watch manufacturer Rolex before joining K-Team, a small robot company. And now, he's sitting in the desert, handing out camel jockey licenses.

The emergence of robot jockeys

The unusual joint venture began in September 2003, with an e-mail message from Qatar, asking about the possibility of developing a jockey-bot. Homegrown engineers working for Qatar's air force had been playing around with a camel jockey robot since 2002. The fruit of their efforts was a 27 kilogram (about 60 lbs.) monstrosity guided by a model airplane remote control unit. When the steel Frankenstein was strapped to a camel and cracked its whip for the first time, the animal went berserk, fell and broke a leg. (Or at least, those are the rumors, which are as persistent as the government's attempts to deny them.) One thing is clear, however, and that is the air force major in charge of the project, Rashid Ali Ibrahim, sought -- and found -- help abroad.

Ibrahim quickly reached an agreement with K-Team and Colot took over the project. Soon, he traveled to the desert kingdom, where he filmed camel races, and -- along with a 10-member team that included two biologists -- studied the animals' behavior patterns. It took the team less than two years to build KAMEL. Today, Colot raves about the creation, calling it "the first mobile robot that can replace humans in complex activities."

The device seems inconspicuous at first glance: A steel frame surrounding a plastic box that contains a Linux computer. The left steel arm holds the reins and the right arm wields the whip. The plastic head even wears a helmet -- to help the camel believe that it's carrying a real human jockey.

Despite the fact that camels, as opposed to horses, for example, are famously obstinate and even aggressive, the prototype works astonishingly well -- aside from the occasional transmission error or loose rein.

But the robot isn't just a technical experiment. It's also a cultural test -- and this is probably where the greatest perils lurk. Cultural differences between the Swiss and the Qataris, for example, become apparent when the Swiss robotics experts try to teach precision to the camel drivers. That includes having them measure the saddle position -- which has to sit exactly horizontal on the camel's back -- with a level. Instead of taking them three minutes to learn, as it rightfully should, the exercise took over 40 minutes to accomplish. Finally, however, they are awarded a license for saddling up the beasts, a document that bears the wordy title, "Robotic Camel Jockey Saddle Fitter Certificate."

Although the actual tests are relatively short, the ensuing discussion goes on for hours, as wildly gesticulating camel owners offer the engineers their suggestions for improvement: the whip should whip harder, the horn should honk louder and the robots should be lighter. Money, it seems, is no object. The motto of the day is clear: "Pimp my camel." They laugh at the Swiss engineers for voicing technical reservations or concerns about the camels' welfare.

"Camel's aren't stupid," and will soon figure the robot's out 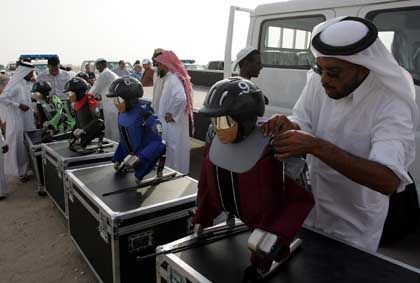 Despite their initial kinks, the robot jockeys won't exactly be facing stiff competition. The country's 22 legal 18-year-old jockeys each weigh about 45 kilograms (100 lbs.), or about three times the amount of the robots. As such, they offer little competition.

But the real culture clash is the one that bisects the community of camel owners. Most of the robotic camel jockey candidates are in their mid-20s, just like the engineers. For older camel-racing fans, these camel console kids represent something akin to the demise of the East.

"This is nonsense," complains Salih Ali al-Marri. "Camels aren't stupid. You can fool them with a robot a few times, but as soon as they figure out what's going on, they'll do what they want." At dusk, he and other camel owners sit barefoot on a carpet in a hut between the camel pens, drinking sweetened camel milk from teacups and watching soccer on TV. "At least Sheikh Hamad could have allowed a grace period for introducing the new law," he says.

Part of his gripe is that the robots have caused the market value of his camels to plummet, says Marri. "These robots are far too great a risk to use on real racing camels, which often cost well over a million dollars." And if the child jockeys become unemployed, their families in the Sudan will starve to death, insists another owner. Others in the group nod in agreement. They refuse to accept that human rights organizations consider this argument a cynical distortion of reality. But most of all, they're upset about what they see as a devaluation of the camel, a male status symbol. "These robots are nothing but children's toys!"

"Exactly," says Jassim al-Ali the next morning, grinning boyishly. "These robots are as easy to operate as kids' toys. That's what's so cool about them!" He grabs a camel remote control unit and jumps into a friend's air-conditioned SUV. He tilts the joystick with two fingers. Ten meters away, a mechanical rider on top of a camel gets ready to crack its whip and the camel twitches and starts galloping. The SUV engine hums, too, and a caravan of 30 SUV's rips across the desert alongside three camels and their mechanical riders. "Jalla, jalla!" shrieks Ali, just like a hysterical teen-ager, "move, move!"

8 Bilder Camel Racing: Robots Jockey for Position in the Desert