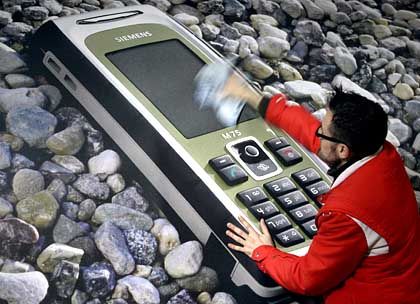 Siemens' cell phone division is in a world of hurt and losing 1 million per day.

In the year 2000, then Siemens CEO Heinrich von Pierer issued the following uncharacteristically combative statement: "We will take over the world of cell phones." Indeed, the otherwise diplomatically reserved Pierer even took his newfound bravado a step further and threw down the gauntlet to Siemens' competition, saying that he was "confident that we will be able to capture the lead from Nokia, Motorola and Ericsson."

Now, however, such bold statements are a thing of the past. For months, Siemens' share of the cell phone industry, once hovering around ten percent, has been plummeting. And it gets worse: The Munich-based high-tech giant has been losing about a million euros a day on its small cell phones. Pierer's successor, Klaus Kleinfeld, is desperately searching for a partner, or even a buyer, for the struggling division.

Although a number of Siemens delegations are currently in talks with companies in Asia and the United States, the company's negotiators have yet to find a taker. This lack of success has led to growing concerns among employees in the cell phone division that Kleinfeld, responding to pressure from the markets, could decide to shutter the once-acclaimed division.

Rarely has a mass-market product lost its allure so quickly within the vast Siemens realm as the cell phone. Even analysts and industry experts are puzzled by the rapid decline of the business. "In fact," says Roland Pitz, an analyst at HypoVereinsbank, "Siemens really didn't make any major mistakes." A German Nokia executive believes that, "in the end, it was probably the combination of mishaps, arrogance, miscalculations and omissions." Indeed, there were many such minor transgressions.

To begin with, Siemens got a late start entering the booming business in the 1990s. Only in 1993, after US wireless pioneer Motorola and Finnish cell phone specialist Nokia had already divided up large portions of the global market, did Siemens begin its own production, manufacturing 300,000 devices in the first year. 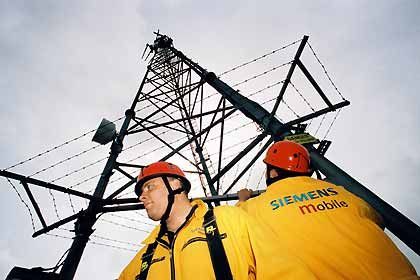 At one time, Siemens hoped to be the market leader in cell phones. Now, they have just 7.2 percent.

As demand for cell phones skyrocketed, even late starters were able to achieve impressive growth figures. A gold-digger mentality soon took hold among Siemens executives in Munich, leading them to predict sales of 60 million units in 2000 -- a figure the company has yet to reach today.

In addition, Siemens executives appear to have overlooked the fact that the roots of their success lay primarily in Germany, where the company has traditionally enjoyed excellent relations with Deutsche Telekom and other network operators. These important relationships are not nearly as well-established in Asia and the United States, causing problems for the company in its non-European markets.

Moreover, consumers' tastes have changed in recent years. Instead of technologically advanced products, consumers have increasingly become interested in cheaper cell phones that are quickly replaced by new models in ever-shortening product life cycles, transforming the cell phone into a fashion accessory.

Siemens quickly caught on to the new trend, creating its "Xelibri" cell phones, which were designed to be sold in boutiques, like jewelry. But the effort turned out to be a costly flop. The extravagant devices offered too little convenience for normal customers, while more affluent consumers were turned off by the phones' plastic housings. 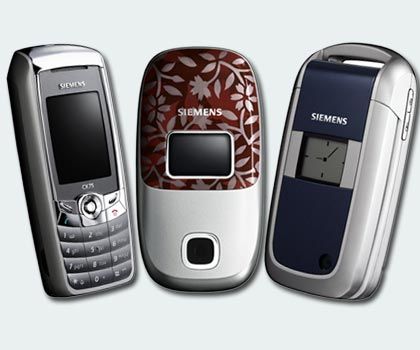 Siemens phones: The company took too long to integrate cameras into the phone housing.

In the fast-moving cell phone business, in which manufacturers like Samsung and Nokia launch up to 80 new models a year into the global market, a delay of three to four months is more than just a minor eternity. Left-over, outdated products also adversely affect prices, and Siemens' unimpressive balance sheet has reflected this price dilution.

To make matters worse, software errors forced Siemens to temporarily recall a new line of cell phones, driving away even its most loyal customers, the network operators. In addition to major customer Deutsche Telekom, Vodafone and the Dutch company KPN, the parent company of E-Plus, began curtailing their orders with Siemens.

As a result, the company was overtaken by LG and Sony Ericsson, a joint venture that has experienced its own share of problems, in the first quarter of 2005. With its current market share of 5.4 percent, the former challenger has dropped to the number six position. For now.

To stop the decline, Siemens is not even shrinking from taking the most extreme of steps -- the sale of miniature cell phones through German coffee giant Tschibo. During the first week of May, Siemens was selling its entry-level model, the MC 60, for just under 60 in Tschibo stores. The price includes a prepaid phone card worth 10. The approach seems to be working. The camera phone, normally twice as expensive, was sold out within a few days.