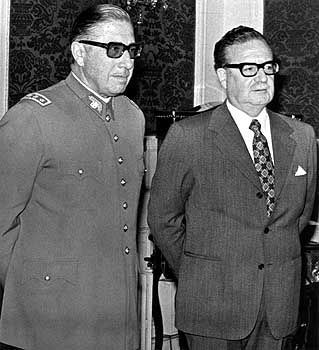 Less than a month before the fatal coup, Chilean President Salvador Allende stands next to General Augusto Pinochet, who overthrew him and set up a military dictatorship that lasted until 1990.

The medical department's library at the university in Santiago de Chile is a spooky place. Located behind the reading room, a tiny elevator leads through several deserted floors. Tucked between shelves -- packed with yellowed anatomy booklets and an x-ray machine that looks like it could be from the Stone Age -- is a glass cabinet holding bottles of liquid. But of what sort? Impossible to say.

Next to this poison cabinet, there's a door, secured with a padlock. Stored there is a yellowed and tattered book collection, which contains the 1933 dissertation of the medical doctor and future president of Chile Salvador Allende Gossens. The work is "public and open to everyone."

But apparently the scientist Victor Farias, 65, was the first person ever to closely read the dissertation. In his newly published book, Farias claims that Allende, known as an icon of the left in South America and Europe, was actually quite different than the legend. The proof, Farias writes, is all right here, in Allende's own dissertation. The scientist says the dissertation exposes Allende as a racist and anti-Semite, and as a proponent of eugenics and forced sterilizations.

By raising these accusations, the philosopher -- who's been teaching at the Latin America Institute at Berlin's Free University since 1974 -- has caused quite a stir. It isn't the first time he's done so: Farias has a track record of raising controversial issues. In his book "Heidegger und Nationalisozialismus" (Heidegger and National Socialism), Farias uncovered embarrassing and previously unknown information on the most German of the German philosophers, Martin Heidegger.

After that, Farias upset half of Chile when he outlined in "Die Nazis in Chile" (The Nazis in Chile) how strongly his home country had once been influenced by the Nazi way of thinking and by Nazi emigrants. His newest book is titled: "Salvador Allende: Antisemitismus und Euthanasie" (Salvador Allende: Anti-Semitism and Euthanasia). So far, the book has only been published in Chile and Spain, but still, Farias has managed to press a rough finger on the delicate culture of memory. 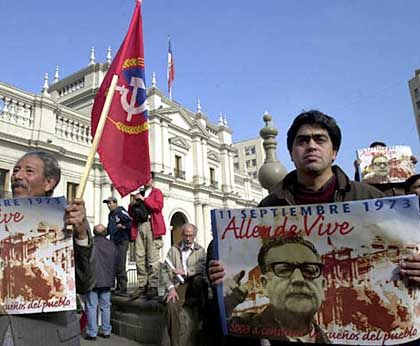 Allende has achieved almost legendary status in Chile. Here, marchers remember him on what would have been his 95th birthday in 2003.

Since his death in the 1973 military coup, Salvador Allende has had the reputation of a victim among left-leaning middle classes the world over. Even in Germany, high schools, streets and squares are named after him. It remains a permanent annoyance for conservatives that the "revolutionary in a tailor-made suit," as Germany's daily Frankfurter Allgemeine Zeitung called him, is still so omnipresent.

But now comes this latest revelation. The intellectual with the soft eyes, the man who killed himself during the bombing of the government palace during the overthrow -- was he really a closet Nazi?

In many ways, the young Dr. Allende was, indeed, in line with the Fascism-infected streams that were so prevalent during the first half of the last century. For example, he argued that mental illnesses, criminal behavior, and alcoholism were hereditary. Or further, he argued that homosexuality is an illness curable by implanting testicle tissue into the abdomen. Another example: Allende proclaimed that the hot climate prevented people in southern regions from acting morally. Referring to other studies, Allende wrote ominously about Jews in his dissertation saying, "The Hebrews are well-known committers of certain types of crimes including: fraud, deceit, defamation, but most notably usury."

While these views may be reflections of the era in which they were written, they certainly do not indicate a future as a well-respected Socialist for Allende -- and Farias deserves credit for discovering them. But typical of his abrasive style, Farias takes things a step further: The dissertation, he writes, wasn't merely a temporary phase for Allende. Instead, Farias accuses Allende of remaining loyal to racism and anti-Semitism for years -- at least until the days of the Popular Front government under President Pedro Aguirre Cerda (1939 to 1942). Allende served as health minister in that administration and promoted a law on the forced sterilization of the mentally ill. The law was never passed.

Eugenics in Europe and the USA

But is it fair to single out Allende? After all, eugenics and racism were part of the mainstream at European and American universities long before the Nazis rose to power. In the United States, scientists of the early 20th century initiated full-fledged breeding projects tolerated by the government. The projects' aims were to protect society from "unwanted" individuals. About 60,000 Americans -- in most cases epileptics, alcoholics, and people with alleged social disorders, all from the lower classes -- had to undergo forced sterilization, even into the 1970s. 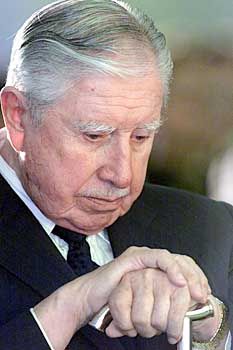 Former Chilean dictator Augusto Pinochet took over from Allende in a violent overthrow.

American authors such as Edwin Black ("War against the Weak") describe how the "global US export of eugenics" increasingly gained approval. Brazilian social scientists saw an opportunity to "lighten up" the skin color of the population. In Sweden, people had no qualms about discussing whether eugenics could be used to promote public health. Indeed, given the historical context, Chile's leading daily, the conservative El Mercurio of all papers, published a defense of Allende against his biographer: "Farias omits the historical context," the paper writes.

The Berlin-based philosopher remains unfazed, however. At one point, Farias was a great admirer of Allende. In fact, he fled Chile just after the 1973 military coup out of fear he would be prosecuted. In exile, he started despising the playful and in many ways euphemistic romanticism of the revolution. Farias is a scholar, but is also skilful at shaping his arguments to reach -- and convince -- the general public.

An example can be seen in his book: He writes that the new revelations about Allende give more meaning to Allende's refusal to turn Nazi criminal Walter Rauff over to Germany in 1972, after Rauff had found refuge in Chile. Even attempts by the Nazi hunter Simon Wiesenthal to intervene with the president failed at the time. In a letter, Allende responded that the president was not allowed to get involved in judicial matters. Formally speaking, Allende was right. Chile's Supreme Court had previously ruled that Rauff -- who had been a senior official in the SS and headed the development of portable death chambers -- could not be handed over because the statute of limitations on his case had expired.

Good sleuthing or just picking over the bones?

In Chile, the response to Farias's revelations has been fairly low-key. By now, Allende has emerged as an important historical personality in Chile -- despite efforts by the Christian-Democratic-led governments of the post-Pinochet era to diminish his reputation. By contrast, the Socialist President Ricardo Lagos has honored Allende as a humanist and a statesman. His rehabilitation is almost complete. 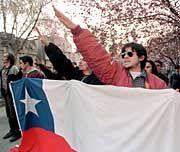 Right extremism is still a problem in Chile. But was Allende one of them?

On the 30th anniversary of his death, an Allende museum opened in Chile, and an Allende foundation has since managed his estate. A summary of the now infamous dissertation -- lacking, however, the compromising passages -- is also on display there.

Needless to say, Allende's old friends feel that Farias is picking over the bones. "Farias is committing a gigantic fraud of history," says Victor Pey, 89, an old companion of Allende. The still-agile man is a native of Spain, but fled to Chile after the Spanish Civil War in the 1930s. Pey defends his old friend on behalf of his family and the Socialist party. He says Farias attributes quotes to Allende that "in fact stemmed from other scientists. Allende was no racist and no anti-Semite. His mother was Jewish."

One of Allende's daughters, Isabelle -- a member of congress for the Socialist Party and a cousin of the world-famous author with the same name -- is curt in her response to Farias's allegations: "I will not comment personally on this pathetic effort."

Farias, meanwhile, calls the accusations from the Allende camp "rubbish" and points to the clear words taken from Allende's dissertation.

For the record, the young Allende received a mediocre grade for his dissertation. For many years, the tattered copy weathered away on a shelf, unread. Now, all of a sudden, there is great interest in the work. In response, library officials quickly installed some protective measures: These days, the original dissertation can only be read under supervision.