On the wooded hills outside the city of Harbin in the northeastern province of Heilongjiang, Chinese developers are building towering wind turbines that will spin day and night to generate clean electricity. The project represents the hope that China, which recently surpassed the US as the world's largest source of greenhouse gases, has truly embraced environmentalism.

The planned 29 turbines near Harbin represent something else as well: the widely accepted notion that market forces can be harnessed to aid the fight against climate change. Under the international treaty known as the Kyoto Protocol, Chinese wind-power developers are selling "carbon credits" reflecting their reductions in emissions of carbon dioxide and other heat-trapping gases.

Corporate and government buyers from industrialized countries pay for the credits as a way of complying with the Kyoto climate-change rules. The funds generated are supposed to encourage additional green-energy projects without forcing owners of older factories and power plants to close down their facilities or undertake expensive renovations. Credits sold under the Kyoto pact generated nearly $7 billion worldwide last year. Beijing has collected almost two-thirds of the total carbon revenue flow since 2002.

Unfortunately, wherever they have been used, carbon credits have been subject to manipulation. On Dec. 4 the UN committee that oversees the international credit trade refused to approve 10 Chinese wind farms, including the Harbin complex. The UN's concern is that the Chinese projects would have been built even without the proceeds from credits.

If that's correct, the sale of credits would not stimulate production of any additional clean energy. Credit purchasers would receive empty environmental bragging rights, and the Chinese developers would obtain an undeserved windfall. "This is 21st century climate-policy snake oil," says Michael Dorsey, a professor of environmental studies at Dartmouth College.

Despite the potential for exploitation of the carbon market, representatives of 192 nations are discussing ways to expand it at the UN climate summit in Copenhagen, which runs through Dec. 18. The US Senate, meanwhile, is poised to consider sweeping environmental legislation early next year that includes provisions allowing corporations to avoid certain pollution-reduction mandates by purchasing carbon credits.

Since the Kyoto Protocol was signed in 1997, many economists, environmentalists, and politicians have endorsed the idea that selling various types of carbon credits (also known as offsets) provides an efficient means of directing funds to the most feasible clean energy projects around the world. A number of credit-trading systems now exist; the UN supervises those that operate under the Kyoto accord.

Their success, however, is predicated on the credits stimulating activity that would not have occurred without special financial incentives. David G. Victor, a professor at the School of International Relations & Pacific Studies at the University of California at San Diego, estimates that between one-third and two-thirds of all carbon credits awarded to developing countries under the Kyoto agreement have rewarded developers whose projects would have been built without the carbon funding. "Carbon offsets offer this promise of letting you have your cake and eat it, too," says Michael W. Wara, a Stanford University law professor specializing in environmental policy. "The problem is they don't work very well."

The 10 Chinese wind farms were rejected, in part, because UN officials fear Beijing is actually reducing its financial support for wind power as a gambit to help the country's clean-energy projects qualify for carbon payments from abroad. The Chinese government may be doing this by cutting the rates the wind farms will be paid for electricity, according to the UN officials.

The Harbin wind farm's developers initially estimated the project would earn an annual profit of 8.76 percent. That would have made the wind farm ineligible for carbon funds, since the cutoff to benefit from credit sales is 8 percent. The Chinese government apparently responded to the situation by reducing what it had been expected to pay for Harbin's electricity, pulling the project's profit margin below 8 percent.

On Dec. 4, the UN announced that it would stop what appears to be China's attempt to game the system. Lex de Jonge, chairman of the UN committee overseeing carbon credits, said in a statement that his panel "must safeguard the environmental integrity of the (carbon market)." He added: "This means registering only projects that would produce emission reductions that are additional to those that would take place without the project."

Some wind-power financiers who stand to benefit from a robust carbon market dispute the UN's rationale. Rejecting carbon credits for the Chinese projects, they say, will scare off investors in renewable energy. "Without those revenues (from credit sales), a lot of investors would pull out," says Steve Lyons, general counsel for China Wind & Energy, a Hong Kong company that helps develop wind farms in China. "For international developers, the return absolutely would not be high enough without the carbon credits."

Beijing may not be the only government retreating from a pro-environment position out of a desire to generate lucrative carbon credits.

Nigeria is encouraging the government-owned Nigerian National Petroleum Corp. and other oil companies to seek credits for reducing the flaring of natural gas, a by-product of oil drilling. The flaring generates large amounts of heat-trapping gases that contribute to climate change.

But gas flaring is already banned in Nigeria. Now the national oil company is lobbying against new legislation that would reinforce the prohibition so that the country can cash in on carbon credit sales. Nigerian National Petroleum's general managing director, Mohammed S. Barkindo, defended the strategy at a November conference in Abuja on climate change. "Any act or law introduced to stop gas flaring," he said, "will erode thecriterion of getting any project registered" with the UN to sell credits, according to the Nigerian publication NEXT.

Levi Ajuonuma, a spokesman for the national petroleum company, says it is looking for the best way to reduce flaring. "The primary motives for pursuing [carbon credits] are not financial," he says. "They are environmental."

University of California professor Victor warns, however, that the distorting effects of trading carbon credits are only beginning. "We shouldn't be surprised," he says. "The incentives to do this are worth billions of dollars." 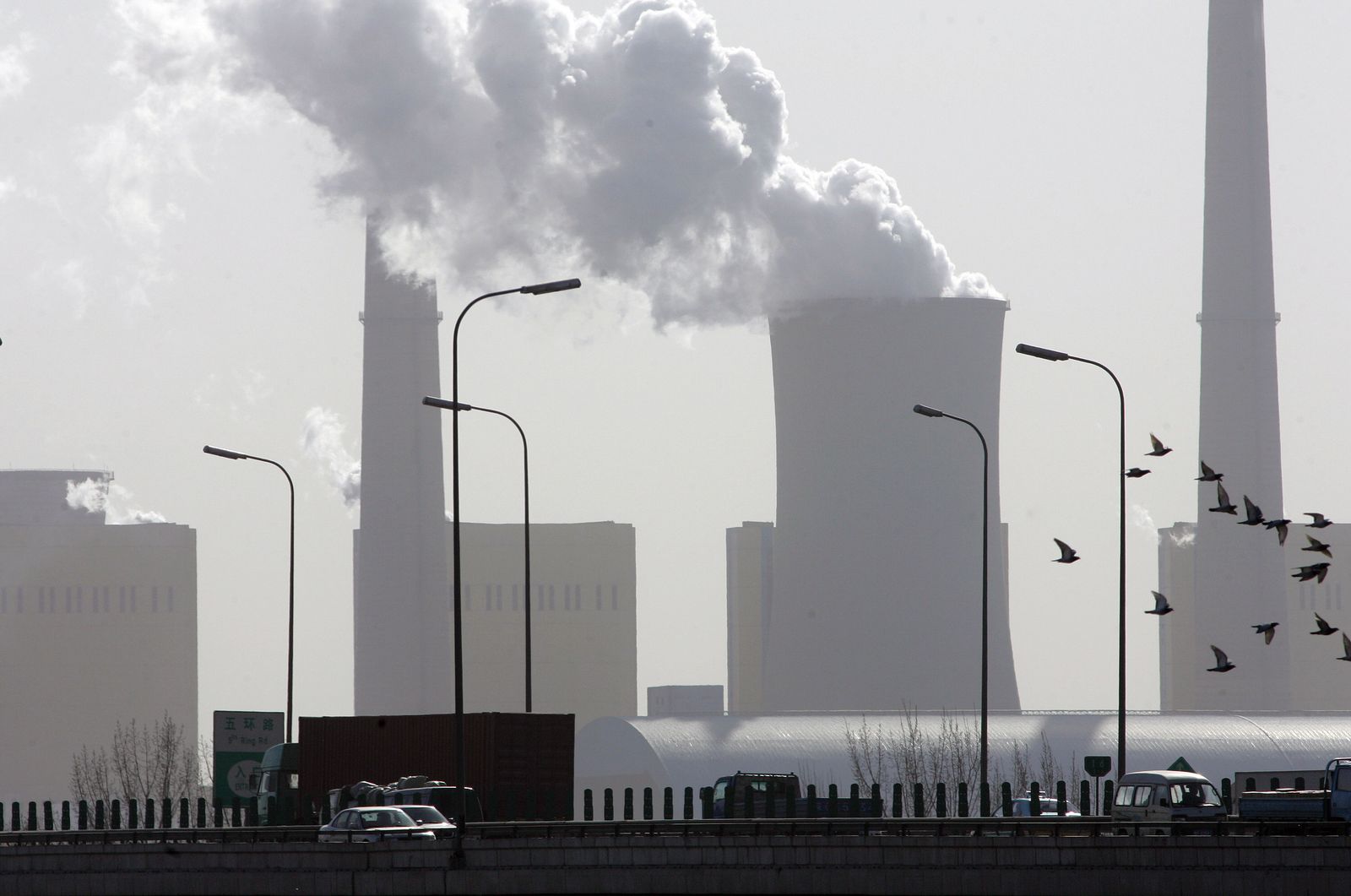 A power plant in Beijing: China recently surpassed the US as the world's largest source of greenhouse gases.