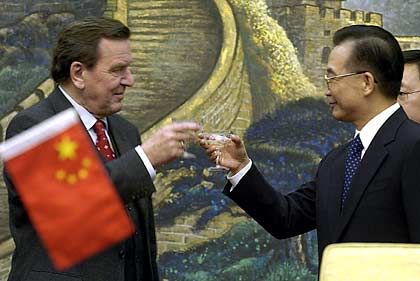 Prost, Wen, we'll get that embargo lifted in no time! Wen: Oh Gerhard, you're the man!

Not even the vehement criticism from inside his Social Democratic Party and its junior government coalition partner, the Greens, could change Gerhard Schroeder's opinion. Inside Beijing's Great Hall of the People, the German chancellor proclaimed: The EU weapons embargo should be lifted and relegated to the dustbin of EU history as quickly as possible.

Chinese Prime Minister Wen Jiabao listened to the strident words of his guest and offered a subtle smile. After all, his guest was saying exactly what he wanted to here: The ban on selling weapons to China no longer reflects reality. China, Schroeder said, has become a "different country" since the bloody events of Tiananmen Square 15 years ago -- the event that triggered the embargo in the first place.

Wen, who is the head of China's government, considers the embargo a "result of the Cold War," that no longer fits into the partnership between China and the EU. Beijing's foreign ministry even threatened "political consequences" at the coming EU-China summit in The Hague if Brussels didn't send a "positive signal."

The main reason Beijing is so confident in placing demands on the EU is that it knows the Europeans have become dependent on trade with China, home to 1.3 billion people. The prospects for lucrative contracts is another reason Schroeder has so vehemently pushed for the lifting of the embargo. Opportunistically, he expects the Chinese will reward him for his lobby work.

And it does appear to be working. Beijing is supporting a stronger roll for Germany in the United Nations Security Council and German firms have inked deals worth hundreds of millions of euros during Schroeder's China trip.

Germans and Chinese alike are seeking to quiet the critics. Currently, Beijing isn't even interested in purchasing weapons from Europe, Wen has assured. At the same time, the Chinese are keen to shred their image as a pariah in the international community. And to that end, dropping the embargo could help.

Meanwhile, Schroeder assures that Germany isn't even considering selling any weapons to China. Germany's stringent export regulations already prohibit the delivering of submarines, aircraft or battle ships to flashpoints. It's a category China falls squarely into because of its threat that it will go to war if Taiwain seeks to declare its independence.

To defend his anti-embargo position, the chancellor has called for a "code of conduct" that would be hammered out by the EU and would serve as a future safety valve: a conduct catalogue that would regulate any weapons exports.

So is this much ado about nothing? Is the lifting of the embargo merely a symbolic act that will help people more than it will hurt them?

Hardly. Schroeder is creating a false impression when he asserts that China is a different country in 2004 than it was in 1989. That may be true economically, but politically the China of today is, as it was then, rigid and authoritarian. Human rights have little meaning, and no one can talk of freedom of the press or freedom of expression or even of free labor unions.

The Communist Party leadership persistently refuses to admit the Tiananmen massacre was a mistake. Some of the activists responsible for the uprising are still in prison -- and families of the many victims continue to be harassed.

And that EU "code of conduct"? Don't pop open the champagne just yet -- it's not even clear yet to what degree EU member states will be forced to follow it, and that, of course, is assuming they are even able to agree to a common position in the first place.

That's why Schroeder's arguments sound half-hearted. The truth is that he's just trying to make a deal with Beijing. But the actual scandal is this: The chancellor has failed to provide the Chinese with serious conditions for getting the arms embargo lifted. Among the demands he could have made would have been the vindication of those who have been politically persecuted for their participation in the 1989 pro-democracy movement. Or he could have demanded the closure of the scandalous work and re-education camps where any person can be sent without even a court hearing.

Instead, the Chinese get to pat each other on the backs: They know that weapons exports are a delicate matter between the United States and Europe. Washington and Tokyo want to preserve the ban. Indeed, if it is lifted, then strife between Washington and Brussels is pre-programmed. And in a trans-Atlantic rift, it's China that stands to gain.

But most importantly: Even if the EU attaches strict conditions to the sale of weapons to China from now on, Beijing would still have its foot in the door, and it could use economic incentives to push it open even further over time.