The Skagerrak strait is a gray body of water in March. But under the waves, at a depth of 100 meters (328 feet), an underwater Garden of Eden is growing.

Whitish hard corals glint in the beam of the headlights of the Jago, a research submersible. Rosefish and bibs flit by. The coral reefs are home to sea stars, sea urchins, sea squirts, long-legged crabs and yellowish sponges. 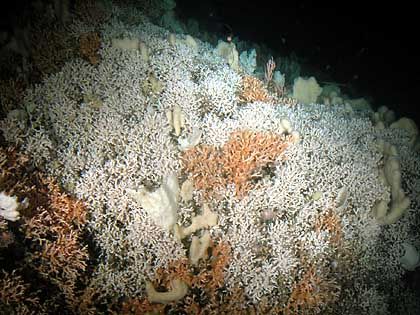 The effect of carbon dioxide on cold-water corals is much like osteoporosis in humans.

Ulf Riebesell sits directly within the Jago's viewing dome, in front of pilot Jürgen Schauer, so that he can study the reef more closely. After a three-hour dive, Riebesell, a researcher at the Leibniz Institute of Marine Sciences (IFM-Geomar) at the University of Kiel in the German Baltic Sea city, is completely captivated. "Some of the underground mountains down there are completely covered with magnificent coral branches," raves Riebesell. "The view is simply overwhelming."

Riebesell and his fellow researchers have spent the last few weeks visiting this fairytale-like coral garden in the region where the North Sea and the Baltic Sea meet, only a few nautical miles off the coast of Norway. The reason for their expedition on board the Alkor, a research ship, is that the habitat on the sea floor, which has hardly been studied, is deeply imperilled.

"Cold-water corals could be the first organisms to fall victim to the acidification of the oceans," says Riebesell, whose dire prediction is supported by a study that appeared earlier this week in the professional journal Frontiers in Ecology and the Environment -- a publication of the Ecological Society of America. In the study (link is in PDF format), experts working with John Guinotte at the Marine Conservation Biology Institute in Bellevue, Washington report that 70 percent of the current habitat of coral branches may no longer be suitable for these organisms by as early as the end of this century.

"Imagine dripping hydrochloric acid onto chalk," says André Freiwald of the University of Erlangen-Nuremberg, one of the co-authors of the study. "The chalk would disintegrate immediately; the corals could face a similar fate."

Freiwald's concerns are supported by a gradual change that has gripped the oceans, a change researchers blame on the greenhouse gas carbon dioxide (CO2). As concentrations of CO2 in the atmosphere continue to rise -- a consequence of the burning of fossil fuels like coal and oil -- a third of the gas is returned to the oceans, where it dissolves as carbon dioxide. The result is that the oceans are becoming more acidic.

"If greenhouse gas emissions continue unabated," says Freiwald, "we could see the highest level of ocean acidification in the last 300 million years." Indeed, there has already been a noticeable change in the pH level of sea water -- a measure of its degree of acidity -- an effect researchers believe will only worsen between now and 2100. 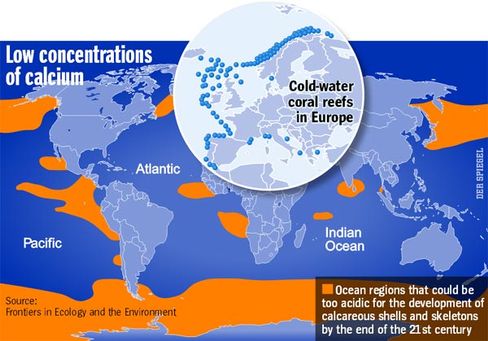 "For many mussels, snails or corals, it could become very difficult in the future to form or maintain their shells and skeletons," Freiwald explains. This is because the dissolved carbon dioxide reduces the availability of carbonate in seawater, a raw material animals need to develop their calcareous skeletons. This makes the animals more fragile and causes them to grow at a considerably slower rate. If the concentration of carbon dioxide in the atmosphere doubles, tropical corals will presumably only be capable of forming skeletons with half their normal thickness. But researchers fear that cold-water corals could be even more susceptible to the disintegrative effects of acidification.

Contrary to popular belief, the light-flooded waters of the tropics aren't the only habitats for corals. Some members of this family also thrive in cold, pitch-black bodies of water. Unlike their warm-water cousins, cold-water corals do not live together with symbiotic algae, and therefore do not require sunlight to grow. The crucial factor for cold-water corals is water temperature, which must range from 4-13°C (39-55°F) for the millimeter-sized coral polyps to survive.

In the North Atlantic, samples of the especially widespread stone coral Lophelia pertusa have been spotted at depths of more than 3,000 meters (9,840 feet). In Norwegian fjords, the animals, which snatch plankton from ocean currents with their tiny tentacles, live at depths of as little as 40 meters (131 feet) below sea level. Stone corals have also conquered the depths of the Gulf of Mexico and the waters around the Philippines, where an especially diverse range of coral species is found.

"We assume that cold water reefs extend along the shelf edges of all continents. In fact, they may even cover a larger area worldwide than their tropical cousins," says Freiwald. A band of reefs extending loosely from the arctic Barents Sea down to West Africa is especially impressive. Part of this structure is the Røst reef southwest of Norway's Lofoten Islands, discovered in 2002 and, at a length of 40 kilometers (25 miles), the longest known cold-water coral reef on Earth. Another part is the Porcupine Seabight reef off the coast of Ireland. According to Freiwald, the reef features "carbonate hills formed by corals which are more than 100 meters (328 feet) tall and up to 2 million years old."

Cold water reefs increase in height by no more than 25 millimeters a year. Once destroyed, they take centuries to regenerate. These reefs are currently threatened by fishermen who, with bottom trawling nets that weigh up to six tons, are cutting swaths of devastation into the reefs. Freiwald estimates that "the fishing industry has already destroyed or damaged 50 to 60 percent of the reefs in Scandinavian waters." As bad as this seems, the consequences of rising carbon dioxide concentrations could be even worse in the future. As the oceans become more acidic, corals simply dissolve.

"The trawling nets are destroying the corals," says John Guinotte. But he agrees that ocean acidification poses an even greater danger because it leads to poor skeletal development, a gradual process that he likens to osteoporosis in humans.

Lophelia and its relatives form their skeletons from aragonite, a mineral form of calcium carbonate. But aragonite is highly soluble and very sensitive to changes in pH levels. The problem for cold-water corals is that it is precisely in their habitat -- deep, cold seawater -- where high pressure and low temperatures already make the water more acidic than it is closer to the surface. 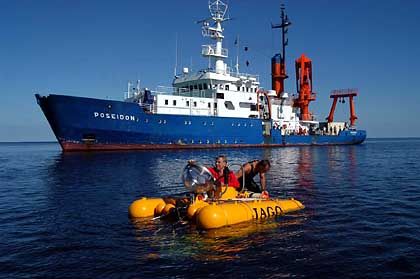 The research submersible Jago off the Baltic Sea coast.

Because of these conditions, cold-water corals will presumably be the first to suffer from acidification if the situation continues to deteriorate and if carbon dioxide emissions are not drastically reduced. The waters around the Antarctic and in the northern Pacific are especially at risk. Last September, a team working with oceanographer James Orr of France's Laboratory of Science of Climate and the Environment (LSCE)wrote a study in which they concluded that the ocean in these regions will have become so acidified by the end of the century that calcium structures will even dissolve at the surface. The current study being conducted by Guinotte's team supports this conclusion.

Scientists are especially worried about armored plankton organisms such as single-cell algaes, coccolithophorids and tiny marine winged snails. These organisms play an especially critical role in the marine ecosystem, because they form the base of the entire food chain. Researchers are granting the algaes a somewhat longer reprieve because their shells are made of calcite, a somewhat more resilient form of calcium carbonate. But winged snails, which have argonite shells, could disappear completely from some parts of the oceans within a few decades. The fishing industry would suffer as a result because economically important fish species such as salmon, cod and mackerel are at the top of the marine food chain.

The loss of cold-water corals could also have drastic consequences. "Although only about ten reef-forming types of these organisms have been discovered worldwide," says Freiwald, "they form the basis of a highly diverse symbiotic community." In the northeastern Atlantic alone, researchers have already discovered more than 1,300 different types of animals that live in coral reefs. Besides, many species of fish use the underwater structures as nesting places. According to Freiwald, "the variety is presumably comparable with that of tropical coral reefs."

"If the reefs dissolve, the entire specialized reef community of deepwater fish, crabs and mollusks could go down with them," warns Kiel-based researcher Riebesell. During the past week, the marine biologist and his colleagues have collected 28 coral branches from the Skagerrak with the Jago submersible's manipulator arm. Last Thursday, the fragile cargo safely reached IFM-Geomar's research aquarium in Kiel, where Riebesell now hopes to be able to study the detailed consequences of acidification in a laboratory environment.

"We want to simulate the ocean of the future," says the researcher. The delicate coral polyps will soon be immersed in water that has been artificially enriched with carbon dioxide. But first the sensitive creatures must become accustomed to their new environment. To make things easier for the corals, Riebesell ordered 24 tons of deep-sea water to be delivered from the Skagerrak reef area to Kiel -- "so that the corals can get used to living here in our laboratory."