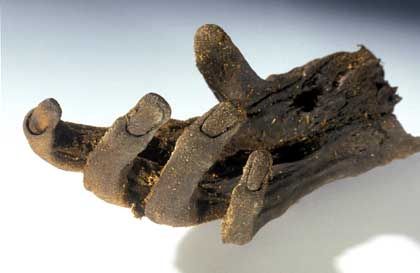 The hand of the corpse discovered in the Uchter Moor in northern Germany.

Its blade plunging into the earth, the peat-cutting machine crept slowly through the Grosses Uchter Moor (Great Uchte Moor) in the northern German state of Lower Saxony. A worker stacked the sections of turf sliced free by the guillotine-like blade. Suddenly he paused, something having caught his eye. "What's this? An old leather jacket?"

It wasn't. In fact, what the worker had dredged from the moor was a large piece of human skin. It was followed by long bones, a foot, fingernails, an open ribcage and more and more hair, everything colored rust-red by acids in the bog.

The gruesome find was made in Sept. 2000, but it was only last week that the press got wind of it -- and hailed it as a sensation. It was, after all, the first time in 20 years that an ancient corpse had been pulled out of the German moors. "We're overjoyed," says Henning Hassmann of the State Office of Historic Preservation in Hanover.

The corpse found in the bogs is that of a teenage girl, between 16 and 19 years old -- and with perfect teeth. According to the radiocarbon dating method, the corpse is from 650 B.C., meaning she was likely part of an early Germanic tribe. But that wasn't immediately obvious. Because the well-preserved corpse was nude, the criminal investigation department concluded the girl had been the victim of a sex crime and sent the corpse to the forensic medicine department in Hamburg. But the forensic experts were unable to find any evidence of violence. The file was soon forgotten and began to gather dust. Only when peat-cutters -- working at the same location again in January 2005 --happened across more bones embedded in the moor did the officials begin questioning their earlier assessment.

The case has now been turned over to the State Office for the Conservation of Monuments and Archaeology, which says that the body has been "excellently" preserved -- indeed, comparisons have been made to Oetzi, the perfectly preserved, 5,000-year-old mummy pulled from an Alpine glacier in 1991. The newspaper Frankfurter Allgemeine was also enthusiastic. The "delicate hand" of the dead girl, the paper wrote, is "curved, as if it had been drawn in prayer by Albrecht Duerer."

But the truth isn't quite so poetic. During the harvesting of peat for nurseries, the machine's blades sliced up the ancient Germanic tribeswoman like a salami. "We have 100 parts," Hassmann admits. One scapula and two ribs are missing entirely.

The 2,650-year-old corpse was shredded by peat harvesting machinery.

Out in Uchte Moor, dig supervisor Alf Metzler is busy searching for more bones and says that 90 percent of the skeleton has so far been recovered. Endoscopes and computer tomographs will soon examine the insides of the corpse -- the researchers will be looking for worms and pollen and scanning the skeleton for growth disorders and other anomalies.

Their initial findings are already perplexing. The girl had ventured deep into the bogs, which surprises the researchers. "The next hard-surface path was two kilometers away," says Metzler. The woman had nimbly hopped from hump to hump -- dry islands that were covered with heather and stunted trees, offering a person walking through the bogs solid ground.

The moor covered an area of several square kilometers and -- like many highland moors -- was often covered in fog. And it was dangerous -- anyone unlucky enough to slip into the hollows between the dry humps was a goner.

Did the woman commit suicide? Or was she fleeing from something? Perhaps she was just gathering birds' eggs. Metzler introduces another idea: He imagines that the woman may have been some sort of a witch who used herbs to practice her art and had ventured into the bogs to gather bilberries. The blue fruits have an intoxicating effect, and were used as a drug by the early Germanic tribes. But at this point, explanations are premature and nothing more than conjecture.

Beaten to death and buried in the moors

Around the time of Christ's birth, vast, foreboding highland moors covered the hinterlands along the North Sea coast. According to ancient sources, the farmers built their huts along the edges of these grassy swamps, and plank paths led through them. But despite precautions, people were constantly falling into the swamps. About a thousand moor corpses have reportedly been discovered, mainly in the Netherlands, northern Germany and Denmark. In some cases, the skin is well-preserved while the skeleton has decomposed -- leaving the corpses look like empty hoses.

These naturally preserved bodies keep revealing new details. The Danish "Tollund Man" was found wearing a leather cap. Others wore fine shoes or luxurious woven coats. Some mummies are tattooed, and some were found with apple seeds in their stomachs and round worms in their intestines.

Signs of violence are common among the moor corpses. Many were strangled or beaten to death before falling into their wet graves. Others had puncture wounds in their chests. The famous "Red Franz" was killed by a knife wound to his throat.

Part Two: Atrocities on the Moor. 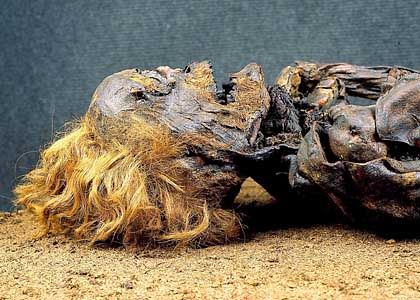 Red Franz was killed by a knife jab to the throat.

But why? It's known that the Germanic tribes offered human sacrifices to their supreme deity, Wotan. They also buried weapons and other spoils of war in the swamps. It is likely that they believed the gods were especially nearby in the lonely and barren moors.

But most of the dead in the peat bogs are apparently victims of the ancient Nordic justice system. The historian Tacitus reports that among the Germanic tribes ordinary criminals were publicly hanged on tree branches. But anyone who had committed "shameful acts," or violations of the moral decency laws, was secretly executed in the moor. This torture, Tacitus continues, was suffered by "cowards in battle" and, more importantly, the "lewd." This is probably a reference to homosexual men, and perhaps those accused of perverse crimes and adulterers. The "Girl of Windeby" ended up in the moor with her head shaved, and her thumb is obscenely placed between her index and middle fingers.

But the disabled also apparently ended up in the clutches of the secret courts. "A noticeably large number of moor corpses had a physical disability," explains Dusseldorf forensics expert Peter Pieper. The 16-year-old "Girl of Yde" suffered from abnormal curvature of the spine. The "Boy of Kayhausen," the moor corpse of a six-year-old boy discovered in 1922 and now on display in the northern German city of Oldenburg -- had last eaten millet and sorrel, and his abdominal wall is torn, the result, researchers believe, of a blow. The hip is crooked, the result of a condition known as ankylotic hip and the boy apparently had a heavy limp.

Sentenced to die by the "moral courts"

He was attacked at some point around 200 A.D. -- stabbed twice in the neck below the left ear, then a third time from the front, just missing the throat. The boy appears to have tried to defend himself, because the blade also penetrated his raised upper arm. Then the murderers elaborately tied up the boy with a noose.

Such signs of brutality are typical. Many moor corpses were essentially killed more than once; the experts call it "overkill." The true scope of these atrocities has only recently come to light. A few weeks ago, Canadian forensic doctor Heather Gill-Robinson examined the "Moor Corpse of Daetgen," concluding that the man (between 40 and 60 years old) was beheaded. He was also stabbed in the chest and his penis was cut off. 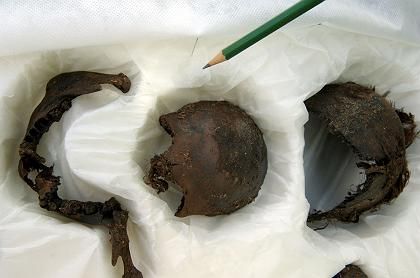 Parts of the skeleton from the new find in the Uchte Moor.

Researchers believe that there was an irrational reason for this overkill. The "lewd" had violated taboos and the holy moral decency laws. They were considered impure and shameful, tainted by the stench of what was considered evil sexual passion (because it was forbidden). It was believed they would return to the world of the living to exact revenge.

"The Germanic tribes were afraid of vampires," explains Hassmann. To render them harmless, they were ritually mutilated. Archeologist Michael Gebuehr, who will unveil a moor corpse exhibit titled "Paths into the Afterlife" in the northern German city of Schleswig this week, calls this superstition "fear of demons." According to Gebuehr, the wooden huts of the Germanic tribes were filled with tall tales and horror stories about living corpses, zombies and "Nachzehrern" -- demons that would plunge their teeth into the flesh of innocent sleepers at night.

To prevent all of this, the condemned had to be kept far away from this life. Some moor corpses were impaled. Others were covered with stones or weighed down with fencing material made of branches and twigs. These were all precautions intended to prevent them from leaving the moor as the undead.

Burning the unholy corpses -- a normal burial custom at the time -- was out of the question. "The evil spirits would have risen into the air with the smoke," Gebuehr explains, "and would then have been everywhere."

Instead, they were chained and banished. The mechanism that was used to kill the "Man from Juehrdenerfeld," discovered in 1934, was especially elaborate. His body was placed into a moor hole and weighed down with a grid of stakes. To prevent him from lifting the grid, the undertakers had pulled the man's two arms from his shoulders.

High-tech tests being performed on the most recent find, the Girl from Uchte, could reveal whether she ended up in the bogs as one of these victims of the court of morals.

It's possible, of course, that the girl simply lost her footing while gathering eggs. But perhaps she was tied up by court thugs, taken into the highland moor, executed and locked away in a vampire grave, a peat-encased tomb from which they believed she could never escape. "Anything is possible," says Hassmann.

In the region near Uchte, on a peat meadow and surrounded by the clamor of crows, archeologist Metzler keeps digging away. He plans to continue searching for body parts until the end of this week. He hopes to find broaches used to tie robes or bits of clothing.

"The police may have been barking up the wrong tree back then," he says, "but the episode remains a criminal case."