SPIEGEL: Do you know who killed your son?

Gemayel: Everything points to Syria.

SPIEGEL: Do you really believe that Syrian President Bashar Assad would burden himself with such a crime, at a time when he is seeking to improve relations with the United States? 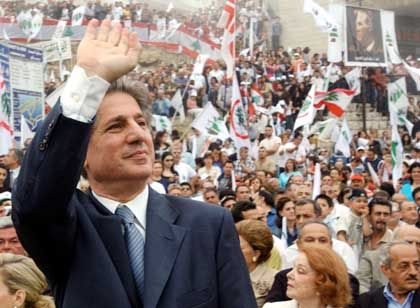 Gemayel: We have decades-long experience with the Syrians. Their behavior here is still fresh in the memory of the Lebanese. The list of our countrymen who were killed is long. It began in 1982 with the murder of my brother Bashir, his younger daughter, the newly elected President René Mauwwad and many others. It continued to Rafik al-Hariri and now my son Pierre.

SPIEGEL: Do you have any evidence?

Gemayel: I am convinced that the murderers and their sponsors are going to be found and brought to justice.

SPIEGEL: With the help of the international tribunal that the United Nations Security Council has established?

SPIEGEL: The Shiite militia Hezbollah and the opposition in Lebanon are resisting the alleged judicial intervention.

Gemayel: There is going to be a tribunal: its opponents' fear of exposing the backers impresses no one any more. The murder of my son has outraged the world.

SPIEGEL: Do you fear that the series of murders will continue?

Gemayel: I hope that the assassination of my son Pierre signifies the end of the long trail of blood. The determination of the Lebanese and the worldwide public to expose the perpetrators has never been so strong.

SPIEGEL: Yet the opposition is fighting the UN court so vehemently that Western diplomats here in Beirut are already concerned about the breakout of a new civil war.

Gemayel: All Lebanese have had enough of war and murder. Nobody wants a new civil war.

SPIEGEL: Many of your supporters, especially in your own party, want you to become President of the Cedar Republic for a second time. Will you run for office again?

Gemayel: It is still much too early to be thinking about that.