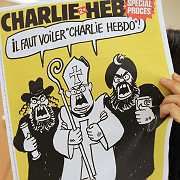 France's satirical weekly Charlie Hebdo was taken to court by Islamic groups in France for reprinting the controversial cartoons of the Prophet Muhammad. Sales shot from 60,000 to 400,000.

The style of debate was intellectually on a par with that of any literary salon; the legal arguments will be sure to enter the canon of every lawyer's professional training; and the appearances made by high-ranking representatives of science and politics were often reminiscent of high theater. When Muslim organizations sued French satirical magazine Charlie Hebdo, everyone posed -- in unexpected ways -- as defenders of this or that French tradition.

Dalil Boubakeur, rector of the Grand Mosque of Paris, invoked the secular principles of the French constitution while Philippe Val, editor-in-chief of the intransigent (and often anti-clerical) Charlie Hebdo, quoted John Paul II. Meanwhile, Interior Minister Nicolas Sarkozy -- not exactly famous for being gentle with journalists -- used the trial to present himself as a champion of a free press.

Charlie Hebdo directs its satire every week against France's right-wing establishment as well as the country's self-contented "caviar left." It reprinted cartoons of the Prophet Muhammad in February of 2006 -- cartoons that provoked a wave of anti-Western hysteria in the Muslim world after they first appeared in the Danish newspaper Jyllands-Posten. Protesters attacked the offices of Danish companies; churches and embassies went up in flames.

But the attacks also led the western media to close ranks in a remarkable way. As a gesture of solidarity, 150 newspapers in 60 countries reprinted the cartoons. The decision to do so was risky, even in Voltaire's hometown. The editor-in-chief of France Soir was fired after the popular daily published the cartoons. That of course was reason enough for Charlie Hebdo to publish them, too.

But the paper went one step further and added its own cartoon on the cover, showing Muhammad in a state of exasperation. "It's tough being loved by idiots," he complains, face buried in hands -- an allusion to suicide bombers who blow themselves up in the name of Allah and his prophet. French Muslim preachers smelled an outbreak of Islamophobia, and felt pious believers had been equated with brutal killers. Boubakeur, who directs the Paris Great Mosque, spearheaded a new movement against "fomentation of racial hatred."

Boubakeur has a scholarly, respectable-bohemian image in France. In 2003 he created the Muslim Council at the suggestion of Interior Minister Nicolas Sarkozy, who hoped the moderate umbrella association would weaken the influence of extremists. But the cartoon controversy ended this coziness between the Muslim Council and the Interior Ministry. Pressured by radical Council members, Boubakeur began a legal counter-attack. The main charge pressed by various Muslim groups and the Muslim World League was over "public insults against a group of people because they belong to a religion."

But Boubakeur and the Muslim Council badly miscalculated the outcome. The trial against Charlie Hebdo became a tribunal against religious intolerance. Le Monde called it a "trial from another time." Charlie Hebdo editor Val said the "limits of liberty must be verified daily," and then quoted John Paul II: "Be not afraid!"

It wasn't just Islam specialists, philosophers and intellectual gliterati who rushed to defend the paper. Political celebrities also worked visits to the courtroom into the French 2007 presidential campaign. Francois Hollande, first secretary of the French Socialist Party (PS), appeared as a witness and gave an impassioned speech in "defense of freedom of opinion." Francois Bayrou, presidential candidate from the liberal UDF party, underpinned his defense of the paper on the stand by stressing his double identity as a Christian and a French citizen.

Even Sarkozy defended Charlie Hebdo, which typically portrays him as a nightstick-swinging policeman or a rabid pitbull terrier. But Sarkozy -- stumping this year as a candidate for president from the conservative UMP party -- characterized himself as a critic of "every form of censorship" in a written statement to the court. Sarkozy argued it was better to have "too many cartoons" than "no cartoons" and defended the "right to smile."

After he declared his solidarity with Charlie Hebdo, the Muslim Council gave in. An emergency session was held, and Boubakeur demanded a "calming" of the situation and lamented its "politicization."

The moderate language came too late. Last Thursday, the prosecution requested Charlie Hebdo be cleared of all charges. A verdict hearing on March 15 will be a formality.

This historic trial reviewed some founding principles of the French Fifth Republic. But even before the dust had settled, the French had cast their vote for in the old debate between satire and religion -- at the newsstand.Charlie Hebdo, average circulation 60,000, sold 400,000 copies of its Muhammad issue.