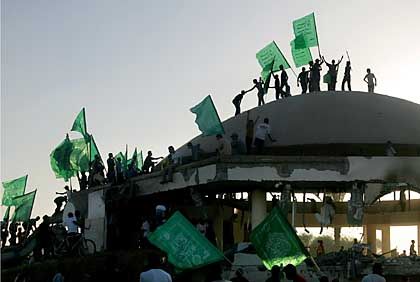 Hamas supporters: No one in Europe wants to be accused of supporting terrorists.

One of the exclusive official duties of a head of state is the act of congratulating other statesmen when they have won an election or been inaugurated into office. There are fine gradations to the act: A phone call is preferable to a letter and the more important the statesman is, the faster the call should be made.

Seen in this light, German Chancellor Angela Merkel must hold Israeli Prime Minister Ehud Ohlert in high regard. The two leaders spent ten minutes speaking to each other last Wednesday, the same day it was announced that Olmert had won the election in Israel. In her conversation with Olmert, Merkel voiced the standard sentiments a head of state would express in this situation -- that she was pleased about his success at the polls, and that she wished him all the best.

After hanging up with Ohlert, the chancellor could easily have had an aide put her through to another recent winner of an election in the region. On that same day, in Gaza City, only 80 kilometers (50 miles) from Jerusalem, another head of state was inaugurated into office. Palestinian President Mahmoud Abbas swore Hamas leader Ismail Haniyeh in as the new prime minister of the Palestinian Autonomous Authority. But Haniyeh will be waiting in vain if he expects to see Berlin sending even a few friendly words his way anytime soon.

The members of the new Palestinian government are personae non gratae in Germany. Even after its victory at the polls two months ago, Hamas is still considered a terrorist organization by Berlin, and Germany refuses to maintain diplomatic relations. According to an official at the German Foreign Ministry, the official policy toward Hamas is clear: "no face-to-face talks, no writing, no contact by telephone. Our point of contact with the Palestinians is President Abbas."

If only it were that easy.

In reality, the shift in the Palestinian government has presented Germany and other European countries with a delicate problem. The European Union has a bigger financial stake in the Gaza Strip and the West Bank than anywhere else in the world, and no other ethnic group receives as much international aid on a per capita basis than the 3.5 million Palestinians.

That's why European foreign policy experts are so intensely interested in -- and deeply divided over -- how, exactly, Europe should deal with the Hamas administration. No one wants to be accused of supporting terrorism, but many believe that Hamas, now that it's running the Palestinian government, must be treated differently than in the past.

Chancellor Merkel and Foreign Minister Frank-Walter Steinmeier established their positions early on, naming three conditions for German recognition of the new Palestinian government and, along with recognition, the continuation of direct financial assistance: a comprehensive renunciation of violence, acknowledgement of Israel's right to exist and adherence to existing treaties.

At a recent informal meeting of European foreign ministers in Salzburg, Steinmeier was confronted with just how unpopular these stipulations are with Haniyeh and his supporters, as well as among many EU partners. Although Iran's nuclear ambitions constituted the main item on the meeting's agenda, the attendees unexpectedly began discussing Hamas at a group lunch.

A number of ministers, led by those from Sweden, Finland and Spain, promptly declared that the EU should give Hamas a chance, and that isolating the new regime would be futile. Then Swedish Foreign Minister Laila Freivalds (who resigned a short time later for unrelated reasons) even suggested inviting the two election winners, Haniyeh and Olmert, to join the EU foreign ministers at a meeting in Brussels immediately following the Israeli elections.

Faced with the possibility of what began as an exchange of views turning into an informal resolution, Steinmeier advised moderation and urged his counterparts to wait until the Palestinians had formed their government before reaching any conclusions. But he found little support for his viewpoint, with only the foreign ministers of Denmark and the Czech Republic backing up the German position. "That was a huge effort," said an associate of Steinmeier.

Nevertheless, the Palestinians aren't self-sufficient and they couldn't stay afloat without international aid. More than half of the Palestinian Authority's 2005 budget of €1.6 billion came from abroad. The Europeans are the most generous donors, sending €500 million in development aid to the Palestinian Authority in 2005. The EU pays the salaries of police officers and government bureaucrats. It builds roads, maintains schools and hospitals, and it helps provide clean water.

This aid money, however, has been frozen since Hamas's victory at the polls. In February, the EU approved a special payment of €120 million to prevent the administration from collapsing. And although foreign donors continue to agree that humanitarian aid must continue, it amounts to only about 20 percent of the EU funds funneled to the Palestinians each year. Until now, the lion's share of the money has reached the Authority through development organizations or the United Nations Relief and Works Agency for Palestine Refugees in the Near East (UNRWA), or it was approved as direct budget assistance. EU officials who coordinate the organization's Middle East policies in Brussels are considering significantly expanding humanitarian aid by moving efforts like road construction and education under the humanitarian umbrella. "We have to become more creative in this respect," says Marc Otte, the Special Representative to the Middle East for the EU and foreign policy chief Javier Solana.  "We cannot possibly have an interest in everything falling apart, but we also shouldn't betray our principles. Our money is what gives us influence in the region."

In the opinion of people like Otte, there is no question that Hamas should not be given direct access to financial assistance. However, the more generously they define the types of aid that qualify as humanitarian assistance, the more difficult it will become to ensure that the funds are not misappropriated for uses such as training new fighters. 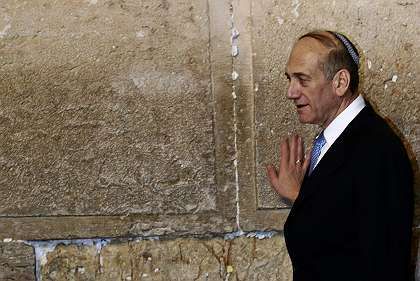 Even in the past, there were recurring signs that funds didn't always arrive at their intended destinations. In fact, abuse of the system was so rampant that a group of EU members of parliament demanded an investigation three years ago. The EU's internal anti-corruption agency ultimately concluded that there was no evidence of a relationship between suicide bombings and EU funds. However, the investigators also had to admit that they themselves had no real knowledge of the movement of funds, and were forced to rely on information provided by the Palestinian Finance Ministry.

Still, it is highly unlikely that Hamas leaders would embezzle EU funds. Unlike the officials of the former ruling Fatah movement, Hamas's devout Islamists are considered largely immune to corruption. Instead, they are more likely to misappropriate the EU funds to further their religious cause. The Palestinian Islamists have never made a secret of their goals. In fact, the destruction of Israel and the transformation of all of the Palestinian-controlled areas into a theocracy are goals set forth in Hamas's founding charter. Until recently, now Prime Minister Haniyeh was fond of posing for photos with children dressed as suicide bombers.

A visit to the Islamic University in Gaza City, which relies on funding from a number of Western donors, including European sponsors, the American development agency USAID and chip manufacturer Intel, shows just how fluid the boundaries are between intentional and unintentional development aid.

The university is one of the most important educational training grounds for Hamas, and includes Haniyeh as one of its alumni. Students and staff are called to prayer five times a day, and women may only enter the grounds through a special entrance, and only when wearing veils. Classes are separated by gender, with guards enforcing dress and behavior codes.

A few weeks ago, a group of EU specialists began studying the maze of projects and money trails in an attempt to shed light on relationships with Hamas and its officials. According to the internal analysis, about half of the €500 million European countries contribute each year to the Palestinians should remain frozen because the money "is either distributed by the Palestinian Autonomous Authority (PA) or is processed through agreements with the PA."

Experts also believe that the other half of the funding could also prove problematic. Last year alone, €65 million flowed into the PA through various UN agencies. The money was intended primarily for education, healthcare and social services, but even these funds are accessible to the PA's new rulers. "Many NGOs in the Palestinian Territories have direct or indirect connections to Hamas," the report soberly concludes.

In fact, local experience shows that foreign aid organizations would have trouble getting by without Hamas. This also applies to German projects that were arranged directly with the PA. In 2005, Berlin invested €46 million more than its EU contribution, most going to sewage and waste disposal projects. In total Germany's aid commitments to the Palestinians between 1995 and 2009 are expected to total €250 million.

"There is always a political sponsor on the other side, and it's usually governmental," says Joachim Prey, director of the General Society for Technical Cooperation (GTZ) in the Palestinian Territories, which monitors projects for Berlin's Ministry for Economic Cooperation and Development. "We Germans cannot simply build three schools on a corner in Gaza," says Erich Stather, a state secretary at the ministry who oversees its Palestinian projects. 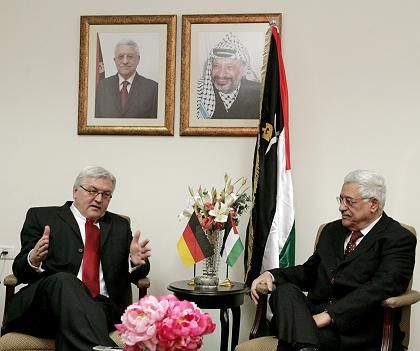 In Bira, a town near Ramallah, the GTZ is building a wastewater treatment system, with the German government investing about €15 million in the project. GTZ employees routinely find themselves having to negotiate with local officials over construction segments and plans. The local powers-that-be have a vested interest in seeing construction progress smoothly because it enables them to take at least some of the credit. After all, no one asks where the money comes from.

At their next scheduled summit meeting on April 10, EU foreign ministers are expected to vote on a resolution on the organization's future dealings with Hamas. But success is far from certain. In fact, some EU officials are already predicting that the foreign ministers will be unable to reach an agreement, which would force each member state to set its own criteria for providing aid to and establishing contact with Hamas.