SPIEGEL: Minister, an increasing number of voices in the EU are calling for euro bonds to be used to end the crisis in the euro zone. Are you among these advocates?

De Jager: No, absolutely not. Euro bonds are not the solution. You cannot end a debt crisis by introducing a new form of debt. Instead, the countries concerned have to tighten up their budgets and introduce reforms to get their economies back on track. Euro bonds are no alternative -- on the contrary, they would have a perverse effect.

De Jager: Euro bonds remove every incentive for ailing countries to return to sensible fiscal and economic policies. Since they offer lower interest rates than their previous government bonds, they induce governments to run up more debt instead of saving. I call that perverse.

SPIEGEL: Even billionaire investor George Soros is calling for euro bonds. Are you saying he doesn't know what he's talking about?

De Jager: He is at least not considering the long-term repercussions of his proposal. Over the short term, euro bonds might calm the markets. But if we don't change the general conditions, five years from now we will have the next crisis, which could be even worse than the present one because even healthy countries like Germany and the Netherlands would be much more in debt.

SPIEGEL: The German government also opposes euro bonds. How long do you think it will be able to maintain this position?

De Jager: I expect the German government to stick to this position. Euro bonds may be an option over the long term, but only if all member countries of the monetary union pursue the same financial policies. We still have a long way to go before we achieve that.

SPIEGEL: The only remaining source of short-term aid is the European Financial Stability Facility (EFSF) bailout fund, which the heads of state and government gave new powers to in late July, yet did not provide with more money. Shouldn't it be increased to remain credible?

De Jager: I'm not generally opposed to bolstering the EFSF, but even that is not a panacea. €440 billion ($632 billion) is not sparse. But if necessary, we're open to talking about it.

SPIEGEL: Wouldn't it make sense to go ahead and double the financial framework right now?

De Jager: That's easy to say, but such an operation has an impact on the creditworthiness of the donor countries. Germany and the Netherlands have a solid AAA rating from the rating agencies. That's not true for all countries with the highest rating …

De Jager: I'm not alluding to any particular country. Such countries are in danger of losing their top rating if they have to extend even more guarantees to the EFSF. Ultimately, we are all threatened by contagion. We cannot simply say that the last member of the currency union that still retains an AAA rating will guarantee the debt of all the remaining countries. The solution to the debt crisis is not to create more debt, but less.

SPIEGEL: Won't it be necessary to bolster the EFSF if Italy needs aid?

De Jager: Italy is a large country with debts of nearly €2 trillion. The sheer size of this figure shows that Italy must never be bailed out by the rescue fund. I am also firmly convinced that it won't come to that. The country's government has approved an austerity program and the budget deficit has not developed nearly as alarmingly as in some other countries.

SPIEGEL: What happens if Greece is not in a position to meet the requirements of the second bailout package -- will there be a third one?

De Jager: Should the Greek government not be in a position to fulfill the terms of the bailout program, then the Netherlands will refuse to provide any further aid. Then we will also block the next installment of the bailout package. The country has no choice but to continue to save and reform.

SPIEGEL: Finland wants collateral from the Greeks in return for additional aid. Isn't this unfair to the other donor countries?

De Jager: As far as we are concerned, no deal has been made. This is an issue that will have to be addressed by all the countries in the euro zone. Throughout the negotiations we have indicated that if Finland receives collateral, the Netherlands also wants the same treatment.

SPIEGEL: Do you think it's possible that the Greeks will leave the euro zone?

De Jager: No, I don't think so. This would make things even harder for the Greek population than they already are now. Failure is not an option for Greece.

SPIEGEL: Will there be a point where the rich and powerful countries say: We've had enough, we're opting out?

De Jager: No, such a step would lead to enormous turmoil, which would also cause more suffering to countries with stable finances than they face from the consequences of the bailout packages.

SPIEGEL: In addition to embattled fringe countries in the euro zone, now even France and Italy are introducing austerity programs. Aren't you afraid that this will stifle growth?

De Jager: It may be that the consolidation will cost us a bit of growth. But that is the lesser evil. If the debt crisis were to deepen and spark another financial crisis, this would be much worse because we would certainly slide into a recession.

SPIEGEL: The reason for the most recent turmoil is that the decisions made during the crisis summit were already being questioned after two weeks. What can be done about this cacophony in Europe?

De Jager: The only thing that helps is for everyone involved to practice verbal discipline. I would give the representatives of the 17 national governments a little more leeway since they have to justify their actions to their parliaments and their people. As for the representatives of European institutions like the Commission, I would recommend thinking very carefully about what impact their comments may have on the markets. A bit more restraint would sometimes be appropriate.

SPIEGEL: You are referring to Commission President José Manuel Barroso who, only two weeks after the summit, sent an open letter to EU leaders voicing his deep dissatisfaction with the effectiveness of the decisions.

De Jager: I'm not mentioning any names, but the guilty parties know who they are.

SPIEGEL: Doesn't the euro zone need institutional reforms to become more credible in the eyes of the markets?

De Jager: You are absolutely right. Tightening the Stability Pact has put us on the right track, but that's not enough. What we need above all are credible sanctioning mechanisms that take effect when rules are broken. We need more teamwork, more cooperation on economic policies, in short: more Europe to implement the agreed rules.

SPIEGEL: Who should impose the sanctions -- the member countries or the Commission?

De Jager: What I envision is an autonomous, independent institution that calls countries to order and imposes penalties. This could be affiliated with an existing institution. Independence is the most important aspect here. German Economy Minister Philipp Rösler proposed something similar under the name of a European Stability Council. I like the idea very much.

SPIEGEL: Who should make the decisions in this body?

De Jager: Academics and experts -- but no politicians. 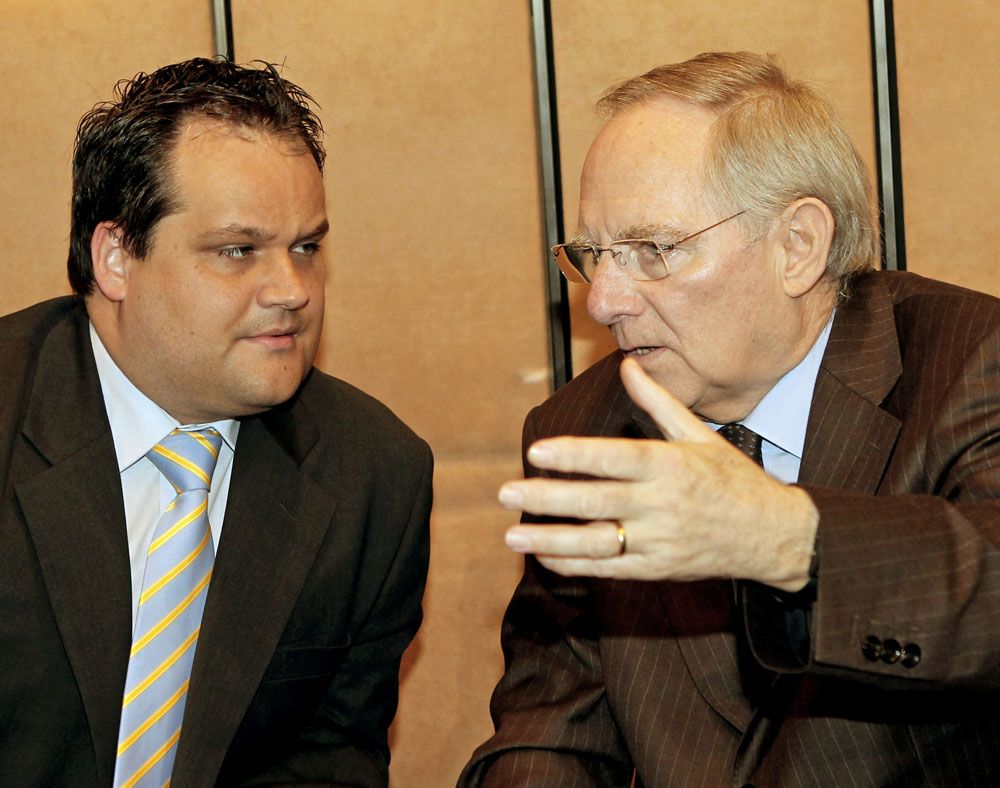