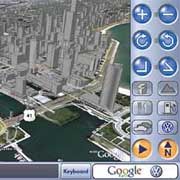 A beta version of the coming 3D version of "Google Earth," which allows Internet users to travel the world without leaving their desks.

Early in his life, John Hanke was fond of running his finger across the pages of his National Geographic atlas, escaping the dreariness of his backwoods town in Texas by going on virtual journeys. "Whoever is born here wants to leave soon," the 40-year-old man says today.

Hanke has remained faithful to virtual tourism. Today, all his hobby involves is typing the name of a place into his computer. After that, it's a lot like piloting a space ship: The globe on his monitor races closer and closer, to the point where he can examine the exact location he requested, down to a radius of 10 meters (33 feet). In this case, he's opted for the Met Life Building in New York. A few more mouse clicks, and his gaze roams around the building at an altitude of 200 meters (656 feet). It looks as if Hanke -- who now lives and works in California -- were hovering over Grand Central Station.

No other computer is more suited to long-distance traveling of this variety than Hanke's. As the creator of "Google Earth," he's the man who put the planet on a hard drive.

Similar flights will be possible on every computer "in the near future," the software expert predicts. A new version of Google Earth will soon hit the market that allows users to admire a whole gamut of cities in largely photorealistic detail. New York is one of them. Last week Google announced a deal with NASA to capture the moon and Mars in 3D as well.

Google, a multibillion dollar corporation based in California, is at war with its powerful rival Microsoft, which has pressed ahead with a three-dimensional version of its own Internet atlas, "Virtual Earth." Bill Gates's corporation is spending millions to compete with Google.

Gates and Google founders Sergej Brin and Larry Page know perfectly well that their digital maps represent the key to a future market potentially worth billions. The 3D Web, as Internet experts call it, could be a platform for new forms of advertising, social networking and online trading. Google Earth and Virtual Earth are like "a seed being sown," according to Internet analyst Greg Sterling, who adds that he has "no idea" today what exactly will grow from that seed.

Much is at stake for the two IT giants, no matter how ostentatiously relaxed the atmosphere in the open-plan offices of the Google campus in Mountain View, California may be. Everything here suggests the creative casualness of an academic research institute. Electric carts lean near the entrance to the building; there are couches and pool tables everywhere; silver marbles roll down a metal track above the partitioning walls.

This kind of relaxed and wealthy style was a trademark of Silicon Valley in the days of the New Economy. Now it's become an exclusive feature of Google's research headquarters, where the new Internet technologies dubbed "Web 2.0" are being developed. Hanke is one of the new Internet era's first winners. In 2004 he sold his mapping software company, Keyhole, to Google.

Clash of the titans

Keyhole combined satellite photographs to create a radically new view of the planet. Now anyone can enjoy aerial views of any corner of the world from their home computer. The software has so far been downloaded more than 100 million times.

An entire "geoculture" has arisen around the new Keyhole technology. Google Earth fans have created a blog listing the coordinates of the Seven Wonders of the World. Others have created sites where famous expeditions like that of Antarctic pioneer Ernest Shackleton can be followed precisely. And huge archives with city views linked to Google Earth maps are being built on the photo website "Flickr." "When I recently traveled to Berlin for a conference," says Hanke, "I planned my walks on the basis of the images on Flickr."

Hanke, a family man, is proud of what he has initiated. The United Nations Environment Program (UNEP) no longer publishes its reports on the hot spots of environmental damage in book form, he points out. UNEP has opted for an electronic format based on cartography provided by Google Earth.

The Internet community will help expand Google Earth to provide three-dimensional images. Anyone interested in participating will be provided with a program known as "Sketch-Up," which makes views of houses and streets look three-dimensional.

To show how this works, Hanke uses the cursor on his screen to stretch a 3-D box on his screen upward. "That's supposed to be the outline of a skyscraper," he explains. Now all the user has to do is download or scan an image of that skyscraper -- the Met Life Building, say -- and the computer can add the façade from the image to the appropriate side of the virtual skyscraper, which can then be admired from all sides.

Google's strategy is fundamentally different from Microsoft's. Microsoft will invest tremendous resources into a top-down effort to photograph the cities of the world. Gates has specially purchased a company for this purpose. It's called Vexcel and is owned by former NASA researcher John Curlander. During the 1990s, Curlander began creating three-dimensional city views for mobile phone providers, allowing them to better identify possible locations for their antennae.

His collaborators took pictures from a plane. The camera saved the exact position from which each picture was taken. Computers can assemble such pictures like puzzle pieces, creating three-dimensional maps. Helped by Curlander, Microsoft wants to add 100 new cities to Virtual Earth by next summer. That will make it possible to experience each of those cities from within. Virtual Earth already allows a user to float into San Francisco from above hills near the Golden Gate Bridge, as if in a helicopter. As the user approaches skyscrapers in the city's financial district, the program can suggest shortcuts between the towering buildings.

No one knows which system will win in the end. The approach chosen by Microsoft still has weaknesses, for example when it tries to render overlapping buildings as seen from above. Google Earth, of course, has to make sure its users survey their cities as completely as possible, rather than focusing on landmark sites like the Eiffel Tower.

Hanke, at Google Earth, is optimistic. He knows the appeal of his software. He points out that administrative authorities in Gran Canaria -- one of the Canary Islands in Spain -- have already provided three-dimensional images of all their towns. "They just want their island to look good," Hanke says.