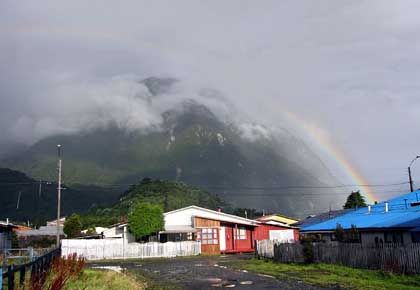 The Chilean village of Chaiten at the entrance of Douglas Tompkins's Pumalin Park in Patagonia.

Douglas Tompkins marches double quick through the rain forest. Unusual cypress growths and moss-covered rocks line the path, as old as though created by God himself. Yet Tompkins barely deems them worthy of a look. He's pressed for time; landscape planners, biologists and forest experts are waiting.

Tompkins is a manager through and through and he manages his forest in the same way he once managed the Esprit clothes company which he founded. The American registers every irritating little detail with his digital camera: slipped lava stones which workers have left on the path, foreign plants which don't go with the vegetation. In a clearing, he marks the grass: "Cattle trampled down this ground." A meadow will flourish here now, a new living space for thousands of animals and plants.

Tompkins is restoring wilderness here in the same way that an architect restores historic buildings. This is why he has bought this spot on earth -- with the volcano, the snow-covered tip of which glistens in the sun; the glacier, the lakes, the forests, the entire magnificent landscape right up to the horizon.

The former clothes tycoon is the most colorful of the multi-millionaires who have bought a piece of Patagonia's natural paradise. George Soros, Ted Turner and Sylvester Stallone have all bought land in South America's southernmost tip. They come here to ski and ride or they breed sheep, like Luciano Benetton. Land is cheap in Patagonia and the nature still seems intact.

Halting the degradation of Chile's nature

The idyll, though, is deceptive. Timber companies, cattle breeders and salmon farmers are busily harvesting the forests and the lakes and fjords in the region are steadily becoming polluted. South America's last non-tropical rain forests are being chopped up in huge sawmills for chips for the cellulose industry, and Chile's environmental laws are not strong enough to protect the trees -- some of which are hundreds of years old.

A case for 62-year-old Douglas Tompkins -- the most controversial conservationist on the continent. Through a convoluted system of foundations, the multi-millionaire has acquired dozens of farms which he is now piecing together like a puzzle to form a huge nature park. "If you want to preserve an eco-system, then the reserve cannot be big enough," assures Tompkins who is, meanwhile, Chile's biggest private landowner.

When he first came to this area during the late 1980s, the farmers thought the gringo was a friendly enough oddball. Many owners of large areas of land, often also with big debts, offered him their estates. Tompkins paid well and promptly and the land prices in the region increased. Yet the seemingly affable nature fan soon revealed himself as a "troublemaker." He took on the salmon farmers because they polluted the fjords with their food waste and he fought against the paving of the Pan-American road which went through his Pumalin National Park. 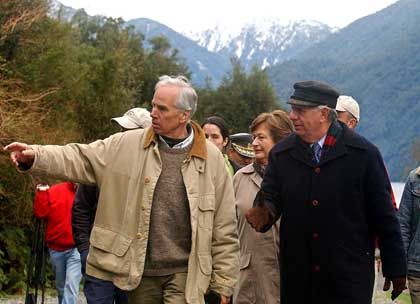 President of Chile Ricardo Lagos (left) has been friendlier to Tompkins than his predecessor.

The park stretches from the Pacific Ocean right through Chile to the Argentinean border and has already given pause to many who worry about Chile's sovereignty. "Tompkins has divided our narrow country," says the dismayed Conservative senator, Antonio Horvath. He senses the scheming of an international green cartel which wants to prevent, "Chile developing." Anti-Semitic military are even saying that the American is acquiring land in "the name of world Judaism" for the founding of a "new Israel", even though Tompkins isn't even Jewish. "In Santiago I was assured that Doug Tompkins is a CIA agent," says astounded Peruvian writer Mario Vargas Llosa, who visited him recently.

Giving the wilderness back

The conspiracy theories mainly have their roots in the governing period of President Eduardo Frei at the end of the 1990s. According to Tompkins, the Christian Democrat added fuel to the prejudices against the eco-millionaire while the lobby of timber companies and cellulose producers found Frei willing to listen to their concerns. Frei's successor however, the Socialist Ricardo Lagos, has shown himself to be much more sympathetic to Tompkins.

Tompkins himself has done much to take the wind out of the sails of the conspiracy theorists. At the end of 2004 he gave a huge reserve in Patagonia -- which he had transformed into wilderness -- back to the state. At some point, he also wants to sign over Pumalin, the heart of his kingdom, but only on the condition that the protection of the nature park is guaranteed. Without such a guarantee, he says, he "would not hand over the control."

As it currently stands, Pumalin has become something like Tompkins's very own eco-empire. He makes his own honey and marmalade, he has planted a tree nursery and plants organic vegetables. He lives with his second wife, Kristine McDivitt, in a restored farm building by a fjord which belongs to the park. Tompkins, also a pilot in his free-time, collects visitors with his own plane or motor boat as the property cannot be reached via land.

The multi-millionaire wears a faded woolen jumper and felt slippers, a beret sits on his snow-white hair. "Bienvenidos" he says, welcoming his guests in Spanish. With his broad grin, lanky frame and furrowed, weather-beaten face, he resembles Hollywood star James Coburn. Yet Tompkins hates being at the center of things and he shuns showy status symbols. The walls of his country house are adorned with photos by the Brazilian star photographer, Sebastião Salgado, a friend of his and on the coffee table there is an illustrated book on the Californian Yosemite National Park, the founder of which, John Muir, was his great role model.

Tompkins grew up in New York yet his heart has always been with the spectacular natural landscapes of the west. He worked as a mountain guide and trekking specialist in California before founding North Face, one of the very first companies dedicated to leisure wear, in the 1960s with $5,000 in capital. When he sold it after only a few years, his initial investment had multiplied considerably allowing him to found Esprit soon thereafter.

The socially liberal San Francisco celebrated Tompkins as the golden boy. His company made hundreds of millions of dollars in the mid '80s, yet he was rarely in the office. Instead, the passionate mountaineer would spend months on end in the Himalayas and other remote areas of the world. At the same time, he was also dedicated to the US civil rights movement and worked his way through huge piles of eco literature in search of a solid theoretical foundation for the movement.

He eventually found what he was looking for in the person of Arne Naess, the Norwegian founder of "Deep Ecology", a fundamental branch of the ecology movement. Like Naess, Tompkins viewed all things living as equal and dismisses the domination of humans over everything. "We must accept our place in nature," he says. "This means that the earth's population must shrink if we want to survive."

You didn't win many friends in conservative Chile with such statements. The Catholic Church condemns the millionaire as someone who scorns human life because he is in favor of strict birth control. Tompkins has also fallen out with the country's environmental protection movement which believes in the concept of sustained development. He doubts whether nature and economic growth can be reconciled because the ruling economic model is based on "the exploitation of natural resources." That he himself is a beneficiary of capitalism doesn't seem to bother him. He did, after all, put his fortune "into the service of conservation," says Tompkins.

The sale of Esprit in 1990 made him over $150 million. With this money he has since financed a worldwide crusade against what he calls the "eco-social crisis" of our civilization. He paid for costly environmental studies and the publishing of books on the ruthless exploitation of nature. But, above all, Tompkins bought land. In 1992 he founded the Conservation Land Trust, a foundation for the conservation of the last natural paradise regions of the earth. He flew over the whole continent with his first wife in his Cessna. At first, he had his eye on estates in Canada and Alaska and then friends invited him to Patagonia.

Tompkins fell in love with the landscape in this remote corner of the earth immediately. He bought a 25,000 hectare farm for $600,000 -- the heart of the Pumalin Park and a "real bargain" as he enthuses, even today. Pumalin is, meanwhile, now considered the best managed national park in South America. But this restless spirit already has his mind set on new goals. He has acquired around 280,000 hectares (almost 700,000 acres) in neighboring Argentina, in the province of Corrientes where he's joining twelve former cattle ranches and rice plantations to form a national park. A sawmill was thrown in as a bonus.

Tompkins made his money by founding, and then selling, Esprit.

Tompkins's estates lie in the Esteros del Ibera, a sub-tropical wetland region which feeds off the Rio Parana and is Argentina's most important freshwater reservoir. For this reason, conspiracy theories are already rife in Buenos Aires which say the millionaire is, in reality, acting as an undercover agent of the US government and their attentions are on the strategically important freshwater supplies. This is, in any case, what politicians from the nationalist left are claiming.

The reality, though, is that the greatest threat to the water supply in the region comes from the local agricultural industry. Cattle herds are trampling down the meadows, eucalyptus plantations for the cellulose industry are exhausting the soil and farmers with large farms are tapping into the rivers for watering their rice fields. Tompkins has employed 400 people on his Estancia "El Socorro" who are to help in his attempt to the effects of such exploitation of nature. They clear the eucalyptus groves, steer rivers and streams back to their original beds and transform pasture land back into their natural state.

He sees himself as a midwife to nature. "If I was king, I would make sure that evolution could develop freely in my kingdom," he says. The master plan is set out for 20 years by which time he wants to have transformed his estates back into wilderness.

Flying low over the swamps you get an idea of his life work. Swarms of flamingos fly up in front of the plane, alligator's glide into the water and an anteater trundles along the meadows. Tompkins lands on an island in a river. Here he wants to build an exclusive lodge for eco tourists. Several workers gather at the runway to welcome "Don Doug". They hand around hot mate tea with "bambilla" and complain about the months-long drought. Many swamps have dried up and marsh areas have transformed into steppe. "These are the effects of climate change," explains Tompkins to the perplexed gauchos. "The 21st century is lost. But I am confident in the 22nd century."

Translated from the German by Andrea Edwards