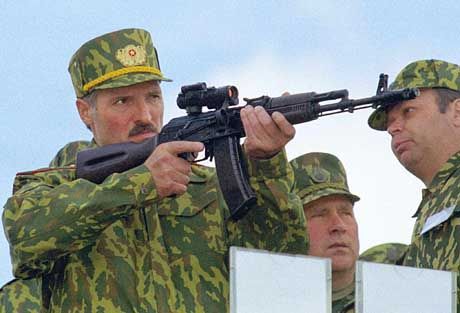 The future of Belarus now has a face. It is gaunt, and views the world through watchful eyes under a high forehead. Valeri Zepkalo, a career diplomat who was deputy foreign minister by the time he was 29 and ambassador to the United States at 32, has now been entrusted to chart the develop a high-tech industry for the backward country.

Now 41, Zepkalo is an advisor to President Alexander Lukashenko. The high-tech park he is building on the outskirts of the capital Minsk is meant to become a "Belarusian Silicon Valley" that attracts future-oriented industries and helps Europe's only remaining state with a socialist-style government develop a market economy. Surrounded by three Soviet-era telephones and a modern flat-screen computer, Zepkalo talks about his plans for venture capital funds, reformed banking laws and special economic zones that will eventually extend from Minsk across the entire country.

He sounds determined, like someone who is more than enthusiastic about taking on what has got to be the most difficult job in the country. The idea, like most in Belarus, stems directly from Lukashenko. From his offices two floors above Zepkalo's office, the president is busy preparing himself for reelection this coming Sunday. The mustachioed strongman expects to capture at least 76 percent of the vote. In office since 1994, Lukashenko has established what US Secretary of State Condoleezza Rice calls the "last dictatorship in Central Europe."

Belarus is under immense scrutiny. Wedged among the European Union members Poland and the Baltic States to the West and North, powerful Russia to the East and Ukraine's orange revolutionaries in the South, Lukashenko keeps tight control over his country's population of ten million. His campaign posters depict happy citizens under a banner that simply read "For Belarus." Unemployment in the country, kept artificially low by the government, is officially at 1.5 percent, while the average monthly wage is the equivalent of €219. The economy supposedly grew by a torrid 9.2 percent in 2005, although even the president's supporters admit that three-quarters of the country's factories, still controlled by the state, are on the brink of ruin.

On the other hand, projects like the high-tech park and the almost complete national library, which cost €160 million to build, indicate a willingness to bring about change. Minsk's philharmonic concert hall has been renovated, its central train station completely rebuilt and the city's subway system now extends all the way out to its far suburbs. The Palace of the Republic, begun during the Soviet era and completed by Lukashenko's construction brigades, now stands as a shining monument to totalitarian architecture.

A deceptive, fragile peace pervades the country. Supported by a Soviet-style intelligence service that even kept the name KGB, tightly controlled youth organizations and trade unions, as well as a parliament purged of any opposition, Lukashenko's rule is seemingly unchallenged. The state-controlled television untiringly reports on the regime's "successes and accomplishments" and trumpets as such events as the official opening of children's clinics and apartment buildings.

Minsk's strongman has shown plenty of nerve in the run-up to the election. In December, his parliament enacted legislation that calls for up to three years' imprisonment for the crime of harming the reputation of Belarus. And the postal service stopped delivering opposition publications to subscribers beginning in January. Many public servants are also only being given one-year contracts -- a not-so-subtle attempt to encourage political cooperation.

A number of regime opponents, including the former Belarusian ambassador to Latvia, have already been detained. Activists with the youth group "Subr" routinely find themselves spending time in jail for agitating against the government. And the former director of the state-run broadcasting system is currently serving an 11-year sentence in a work camp, allegedly for corruption. "Any attempt to destabilize the situation with produce a drastic response," Lukashenko announced on state television in late January. "We will straighten out the perpetrators and those behind the scenes. The embassies of certain countries should be aware of this."

The embassies in question, as Lukashenko's intelligence service chief explained five weeks later, were planning a coup in Belarus, as they had done in other countries in the past. Supposedly on the evening of March 19 -- election day -- a bomb was to be detonated in the midst of demonstrators in an effort to tip public sentiment in Minsk against the government. The suspected behind-the-scenes manipulators are former Yugoslav, Ukrainian and Georgian democratic mercenaries, financed by western non-governmental organizations, the most prominent being the US-based National Democratic Institute (NDI).

Washington has disclosed what funds have been flowing into the heart of Europe to do battle with the Lukashenko regime -- dubbed an "outpost of tyranny" by Secretary Rice. The US Congress approved almost $12 million last year and again for 2006 for the "development of democracy" in Belarus. But because Lukashenko expelled the American democracy advocates and their European counterparts, the NDI, which has ties to the Democratic Party, currently conducts its activities from the Kiev in Ukraine. The organization's Republican counterpart, the International Republican Institute, uses the Lithuanian capital Vilnius, as its Eastern European base. 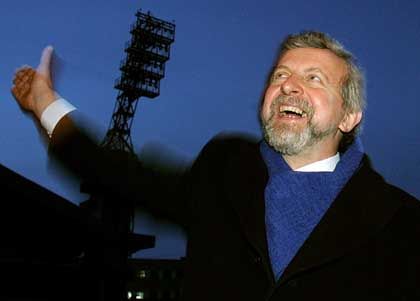 When the representatives of what the US State Department's coordinator for Europe and Asia calls the "Belarusian freedom industry" meet in Vilnius, men like Terry Nelson are on hand to advise them. Nelson made a name for himself as a strategist for US President George W. Bush in the 2004 election campaign, and he is also closely tied to Bush advisor Karl Rove. The group's goal is to bring down a seemingly unshakeable regime in the heart of Europe and transform a previously unknown representative of the Belarusian opposition into a candidate the people can identify with. So far the 58-year-old Alexander Milinkevich, leading candidate of a colorful alliance of ten parties and various organizations, has not presented a true threat to the hard-boiled Lukashenko, nicknamed "Batko" (father) by his supporters. In his public appearances, Milinkevich, an amiable physicist, talks a great deal about freedom, truth and justice -- and that the elections will most likely be rigged.

But for the majority of Belarusians, concerns over wages and food outweigh the issue of the country's moral standards. Milinkevich's chances are also reduced by the fact that one of the parties with which he has aligned himself is the nationalistic Belarusian People's Front and that he also has shown a penchant for condemning the "Russification" of his country.

Although they have suffered under Russian and later Soviet dominance since 1795, the Belarusians remain highly dependent upon peaceful coexistence with Moscow. Lukashenko's state derives 95 percent of its energy supply from Russian sources. And the man in charge at the Kremlin, Russian President Vladimir Putin, continues to supply his Belarusian "brothers" with oil and natural gas at what he calls friendship prices. This means that Belarus is charged less than half the price neighboring Ukraine pays for Russian natural gas. And when it comes to oil, Belarus even manages to turn a profit with the inexpensive crude oil it imports from Russia, processes in its own large refineries and then sells to the West at global market prices. Indeed, Lukashenko uses such energy savings and revenues to help balance his budget.
Belarusian military officials and intelligence agents also still receive their training in Russia -- this despite the fact that Putin has shown little more than muted support for his opinionated Soviet-style counterpart in Minsk. A project aimed at developing a common unified state has been dragging on for the past decade, because Lukashenko refuses to introduce the Russian ruble as his country's official currency and, more importantly, has no intention of relinquishing his position as head of state.

But as the "sole remaining ally" from the former circle of Soviet republics, the autocratic Lukashenko still knows how to keep himself in Moscow's good graces. In the global political chess game, his thinly-populated country represents a space Putin is intent on keeping out of the Western sphere of influence.  Much is at stake for Moscow, including Russian military bases and the "Volga" missile defense radar station at Baranovichi, 125 kilometers (78 miles) southwest of Minsk.

Confident of the Kremlin's continuing support, Lukashenko has even taken the bold step of purging his administration and intelligence service of high-ranking officials loyal to Moscow. In doing so, he has managed to defuse accusations by political opponents that he is a pawn of the Kremlin and that the Russians continue to control Minsk to this day.

Belarus, shaken by centuries of foreign rule and the devastations of the 20th century, is still searching for its place in the world. Lukashenko bills himself as a fearless leader who has taken his country through a labyrinth of the country's difficult history. He is familiar with and takes advantage of prejudices in the western part of Belarus against former Polish landowners and colonists, who oppressed the people in the region when the country was carved up in 1921. Indeed, Polish rule was so brutal that many Belarusians greeted the Red Army's troops as liberators when they marched into the country in 1939 following the signing of the Hitler-Stalin pact. 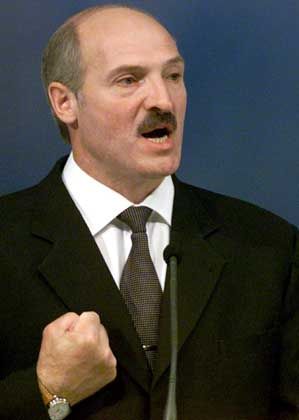 But Lukashenko is also familiar with the skepticism against the Russians, who imposed forced collectivization and Stalinist purges on rural Belarus. The Belarusians also have their share of bad memories of the Germans, whose SS troops murdered entire villages during World War II, a conflict that claimed the lives of about 3.4 million people, or a third of the population. They starved under Stalin, watched Hitler's executioners string up the innocent and finally had enough to eat under Soviet leader Leonid Brezhnev, says pensioner Sofya Gatalskaya, adding that her appetite for change has been sated in this life. What is important, she says, is that Lukashenko makes sure that retirees get their pension checks on time and that arrogant officials are disciplined.

According to a survey conducted last July by the pro-American Pontis Foundation, most Belarusians are "satisfied with their quality of life" and say that they feel a "general sense of stability." And when it comes to improving their economic situation, Belarusians apparently have more confidence in Lukashenko than in his political adversaries.

Despite such ample popular support, the president continues to rail against "brain-damaged types" from the opposition and against "the West's intervention in our internal affairs." Despite the rosy predictions of his sycophants, whose opinion polls see him being reelected by a wide margin, Lukashenko faces election day on Sunday with the typical wariness of a tyrant.

Lukashenko says a question his son Victor recently asked him as the two were walking to the sauna in the presidential residence has been on mind ever since: "Papa, what will happen if you aren't reelected? Where will we live?"