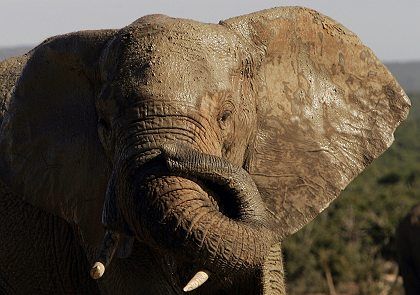 African elephants are once again being hunted in large numbers for their tusks.

Four hours before the freighter was scheduled to arrive in Singapore, customs officials received a tip; and sure enough, when they examined a container from Malawi, they discovered 532 gleaming elephant tusks.

The tusks were accompanied by a shipment of 42,120 hankos, carved ivory seals used in Japan to notarize documents. By the time they had finished their inspection, Singapore harbor officials had seized more than 6.5 tons of gleaming ivory. The Hankos alone were worth around $8.4 million. That 2002 Singapore smuggling bust has generally been considered the biggest blow against the illegal ivory trade since the late 1980s.

With a recent article in the Proceedings of the National Academy of Sciences, the case has gained even greater significance. In the article, Samuel Wasser, conservation biologist at the University of Washington, describes the results of DNA analysis he conducted on the Singapore ivory shipment. By isolating genetic material from the smuggled cargo, he was able to trace the tusks back to the southern African nation of Zambia. Wasser's new tracing method presents itself as a highly promising tool in the fight against the illegal ivory trade.

And it arrives at a crucial time. According to wildlife conservation groups, poachers in Africa are now killing more elephants than they have at anytime in the past 20 years. An estimated 23,000 elephants were illegally slaughtered in 2006 simply so the ivory can be ripped from their jaws and sold on the black market. Since October 2004, customs officials have seized 41 tons of "white gold" -- a total that, according to experts, amounts to only one-tenth of the illegal ivory trade.

The surge in elephant poaching coincides with a revival of talk on legalizing the ivory trade. When the signatory states to the Convention on International Trade in Endangered Species (CITES) meet in The Hague in June, "the ivory trade will be one of the most controversial issues" on the agenda, predicts Jochen Flasbarth, the German chief negotiator and Director of the Department of Conservation at Germany's Ministry of the Environment (BMU).

Botswana and Namibia have submitted petitions to establish annual export quotas for ivory. Tanzania wants permission to sell 100 tons of elephant tusks. Kenya and Mali, on the other hand, are demanding a 20-year moratorium on the ivory trade be continued so that they can increase efforts to bring poaching and smuggling under control.

Daniel Freyer of Pro Wildlife, a Munich-based conservation group, warns against softening the ban. "If Botswana's and Namibia's petition is successful, the trade would spin out of control once and for all," she says.

Bill Clark, the co-author of the University of Washington DNA study and an advisor to the International Fund for Animal Welfare (IFAW), agrees: "The situation for Africa's elephants has never been as serious as it is today. The ivory trade, legal or illegal, is devastating for these animals."

In 1989, the CITES signatory states enacted a total ban on trading in ivory. The move was spurred by a sustained massacre of elephants on an unprecedented scale: in the 1980s, poachers were killing up to 100,000 animals a year.

The comprehensive ban on the ivory trade managed to put an end to the massacres -- but only temporarily. Experts have noted for some time that poaching is again on the rise. In fact, many fear that the current situation is not far from the disaster of the 1980s. "The illegal trade has never increased to the extent that it did in 2006," reports IFAW advisor Clark, who also works for Interpol and was involved in the Singapore investigation.

According to Clark, the increased demand for ivory is especially strong in China and Japan. "Carved ivory tusks are sold for up to $130,000 in Tokyo," says Clark. Although plastic hankos are readily available, authentic ivory hankos are a status symbol "comparable to a Rolex." "Prices on the black market have almost quadrupled since 2004," Clark adds. A kilogram of ivory, which sold for $200 in 2004, is now being traded at $750. 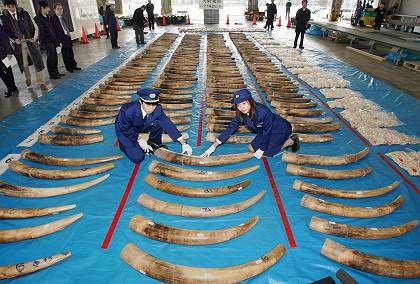 An illegal shipment of ivory was nabbed in Japan on March 1. The country is one of the top destinations for poached ivory.

The market has also been stimulated by a number of provisions for legal trading. In 1997, Zimbabwe, Botswana and Namibia were given permission to sell ivory from government stocks. In 2002, the CITES signatory states further agreed to allow Botswana, Namibia and South Africa to sell a further 60 tons of ivory -- permission that was eventually revoked because the countries failed to sufficiently document how they had acquired their tusks.

The fickleness of the international community reflects the complex considerations it is being asked to make. While the populations of African elephants -- Loxodonta africana -- are declining in countries like Cameroon and the Central African Republic, they are significantly increasing once again in southern Africa. The resulting conflicts between newly neighboring elephant and human populations have occasionally been violent, as marauding herds of elephants have devastated crops and trampled farmers to death.

There are at least 134,000 elephants living in Botswana, and at least 18,000 in South Africa, of which 12,500 live in the country's Kruger National Park. Experts fear that other animal species could suffer if elephant populations continue to grow, especially in nature reserves. Just last week, South African Minister of Environmental Affairs Marthinus van Schalkwyk presented a proposal to control the explosion in the elephant population. The plan includes measures like birth control, resettlement and the hunting of a limited number of elephants. But, given the burgeoning elephant population, many African countries are also seeking to derive some economic benefit from the animals.

"Germany supports elephant protection. However, we must acknowledge that growing elephant populations in southern Africa can lead to serious conflicts," says Jochen Flasbarth of Germany's Ministry of the Environment, who plans to consult with his counterparts in the European Union to develop a joint position for the June conference in The Hague. "It will be very important for us to address the issue in the upcoming negotiations without arrogance."

Despite these reservations, conservationists hope that the CITES signatory states will uphold the strict ban on the ivory trade. Sixty years ago there were three to five million African elephants; according to current estimates, that number now stands, at most, at 690,000. Given this drastic decline, says Clark, overpopulation should hardly be a concern. "Their population is certainly growing in a few countries," the IFAW advisor concedes, before adding: "But, elephants are on the decline in many other countries."

Clark is concerned that if the moratorium on the ivory trade is lifted, elephant killings will skyrocket. "When the trade was still legal, 80 percent of ivory came from poached elephants," says Clark. "What we are now seeing is a revival of precisely the corruption that was successfully brought to a halt in 1989." In Clark's view, the poachers themselves are hardly the ones to blame. "A park ranger in Chad earns $50 a month," but he stands to make eight times as much for a tusk from a single elephant.

"We don't want to spend our time chasing criminals. We want to prevent the crime from happening in the first place," says Professor Wasser. He believes that international cooperation is urgently needed to break up well-organized smuggling syndicates and block the trade routes for ivory.

Wasser is convinced that the new method of determining the source of ivory could help facilitate the effort. "The results force countries to address the problem of poaching on their own territory." The Singapore case, for example, has already put Zambia in the hot seat.

Shortly before the smuggled Singapore shipment was discovered, Zambia's official statistics cited the number of elephants killed illegally at only 135 in the previous 10 years. But Wasser's data tell a different story: "Our calculations show that between 3,000 and 6,500 elephants were poached for this single ivory shipment."