When Amadou arrived in Nouadhibou from his native Senegal, it was like the last leg of a long journey for the 32-year-old. "I sat by the sea every day feeling the cool breeze," he remembers. "I felt very close to Europe." The new friends Amadou made in Nouadhibou -- located on the Atlantic coast of the Western African country of Mauritania -- confirmed his impression. They told him that when the weather was clear, one could see the coast of Spain on the horizon. So he squinted and fixed his gaze on the horizon. There they were -- the lights of Europe and the lights of wealth. The young man's dream of an escape from poverty seemed eminently reachable.

Amadou's new friends took good care of him. They helped him find shelter in a simple hut in one of Nouadhibou's slums where he met people from all over the continent -- all with the same destination. The friendly, ever helpful Nigerians wanted to know everything about Amadou -- most of all, how much money he had saved. In all, he had $2,000 -- enough, he hoped, to fund his trip to the European Union. He dreamed of working there, becoming rich, and returning home triumphantly.

That was then. Three months have gone by since Amadou arrived in the seaside town in north-western Mauritania and he's still sitting in his little corrugated iron hut. Now, though, he has no money left. Like hundreds of other African refugees, he's become the victim of ruthless gangs promising refugees who arrive in Nouadhibou a safe trip to the Canary Islands -- a small piece of Spain floating in the Atlantic Ocean some 1,000 kilometers (620 miles) off the west coast of Africa. Amadou paid $1,500 for the journey, but the little wooden boat that was supposed to take him and other refugees to paradise broke apart shortly after leaving the coast of Senegal. Amadou's dream broke apart with it.

Sinking in the open ocean 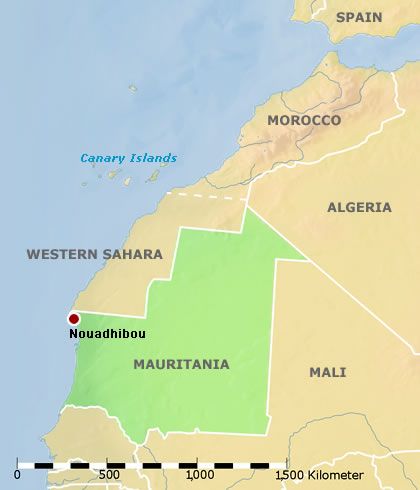 West Africa has become the new gateway to Europe.

Amadou now knows that he was one of the lucky ones -- after all, he's still alive. Many others have lost their lives chasing their European dream. Many boats manage to stay afloat for the first day on the trip to the Canaries, before sinking in the open ocean. Other refugees never even reached Nouadhibou -- they got lost in the desert and die of dehydration. No one knows how many people have died on their risky journey from the poverty of Africa to the apparent wealth of Europe. The aid organization Red Crescent estimates that as many as 1,700 have died; 600 bloated corpses have been found so far.

The numbers are bound to rise. The route through Mauritania has become popular now that Morocco has used EU funds to massively expand its border controls, turning Spanish enclaves such as Ceuta into small fortresses. Some 4,700 illegal immigrants arrived on the Canary Islands in 2005; within the first three months of this year, it was already 3,800. The Red Crescent estimates that a further 15,000 people in Nouadhibou are currently waiting to make the trip. The exodus, in other words, is far from coming to an end.

And the city of Nouadhibou has become a thoroughfare for the wretched of the earth. Immigrant settlements are mushrooming all over the town where refugees from Senegal, Mali and other West African states live in terrible conditions without running water or electricity. Food rots and animals decay between the windowless sheds. Thousands of flies are drawn by human waste and vomit. Children play in the mud, and sheep come looking for food.

Those who arrive in Nouadhibou -- roughly 100 people a day -- are immediately separated by nationality. The mafia of human traffickers is controlled mainly by Nigerians; they hire local fishers and pay to use their boats. The human traffickers also rent rooms for about $3 a day; often as many as 10 people crowd in these rooms, waiting to travel the ocean. For now, the human traffickers of Nouadhibou have no competitors to deal with.

Just what the refugees, called clandestines, dream of is becoming more and more apparent in Nouadhibou. Large, new BMW and Mercedes sedans can be seen more and more often -- often parked in front of the city's half dozen Chinese restaurants. People don't go there to eat, though and there's not much on the menu anyway. Underage girls offer their services in backrooms and none of the customers want to talk much. They all juggle several mobile phones and disappear frequently into the backrooms. They're doing business, they say. This is a harbor town after all.

Little boats crammed with refugees depart from the coast every day. One boat earns the local mafia as much as €30,000 ($38,500). The human traffickers don't care whether the refugees get to where they want to go, whether they're caught by the police or drown. They're paid on departure. If their customers don't succeed, that's not necessarily a disadvantage -- after all, many of them try again. They may wind up in a patched-up boat that doesn't even make it out of the harbor.

Little has been done to fight human trafficking here until now. There's not much the police can do, and many of them have been bribed into silence. They're equipped with neither a working patrol boat nor enough cars for patrolling the large harbor area. "We do what we can," says Security Director Yahivdhon Quld Amar, "but we can't stop these masses of people." The truth is that he only has four officers at his disposal -- guardsmen who saunter through the harbor at night, when they're not sleeping.

The EU has promised to help. Alerted to the problem by the growing number of refugees and by images of bloated corpses arriving on the Canary Islands, it's promised Mauritania €2 million of financial aid. The goal is to buy patrol boats and expand control measures in Nouadhibou harbor. But the Mauritanian government is still debating what exactly to do with the money.

Meanwhile the human traffickers continue to make their money off people's misery. Every day, men are sent into the slums of Nouadhibou to advertise new deals. Prices range from €400 ($515) for a small wooden boat to €1,500 ($1,920) for a boat with a steel hull. Fair prices, the human traffickers say. Go for a steel boat and you'll run almost no risk at all.